With the A's and Angels squaring off for three games, I asked Eric Campuzano of Halos Heaven a few questions about his favorite team. Here's what he had to say!

The Oakland Athletics have reached the final stop on their nine-game road trip. Things are going well so far, as the team won its series in both New York and Baltimore and are 4-2 on the trip. There was quite a bit of drama in the Baltimore series, but hopefully that is now in the rear-view mirror and the team won't be interrupted from its season-long hot streak. This last stop takes the A's to Anaheim to play the Angels, whom the A's just swept a week ago before they headed out on the road.

The A's will face the same three starters they saw in the last series, which is good because they don't include C.J. Wilson. Richards rebounded from his disastrous start in Oakland to toss eight shutout innings against the Astros in his last outing, so who knows what he'll do tonight. Skaggs will have to avoid walking anybody if he wants to succeed against Oakland. And it's tough to see the A's beating Weaver twice in a row, but it was hard to predict them pounding him even once and they are really good at baseball, so it's not out of the question. Expect the Angels to be fired up after the recent sweep. They will not go down so easily this time.

1. Josh Hamilton returned to the lineup Tuesday after missing most of the first two months of the season. How did he do in his first week back? Are there any lingering effects from his thumb injury, or does he look like his normal self?

EC: It seems like he has not missed a beat. But that being said, with his swing, he will always look like a million bucks or two buck chuck. The most encouraging observation is that he is not striking out a lot. He is putting the ball in play; which for Halo fans in encouraging.

2. Mike Trout had some back problems in the last series against the A's. Have those issues continued? And if so, could his back cost him any playing time in this series?

EC: Trout played in the White Sox series, don't know you if saw his game-tying grand slam, so I would expect him to play and cause some trouble for the A's. It is a bit disconcerting for him being so young and already sitting out due to back problems. But he is certainly not made out glass like his peer Bryce Harper.

3. Which former Athletic would you keep, if you could only have one: Collin Cowgill or Grant Green? In other words, the all-around solid role player (Cowgill) or the high-upside hitter with major flaws elsewhere in his game (Green)?

EC: First I want to thank A's blessing the Halos with both Cowgill and Green. We will take your scraps without shame. The problem is not the players, but the manager. There are mini riots on Halos Heaven anytime the kids are not playing. Manager Mike likes to go with the gritty veterans regardless of the outcome. For example, as posted by "Turks Teeth" Grant Green: .359/.373/.469 over 22 games vs Raul Ibanez: .143/.249/.259 over 49 games. Green plays 5 positions (none of them well). Ibanez plays one position (terribly). So the Halos send down Green and bring up Cory Rasmus who has pitched to a 6.57 ERA over his last 10 appearances in AAA, with seven walks and two home runs.

On Halos Heaven, we don't know who is leading this team; the owner, the front office, or the manager. Almost every move is somewhat perplexing. Thus, I will take Green. He has cooler hair. 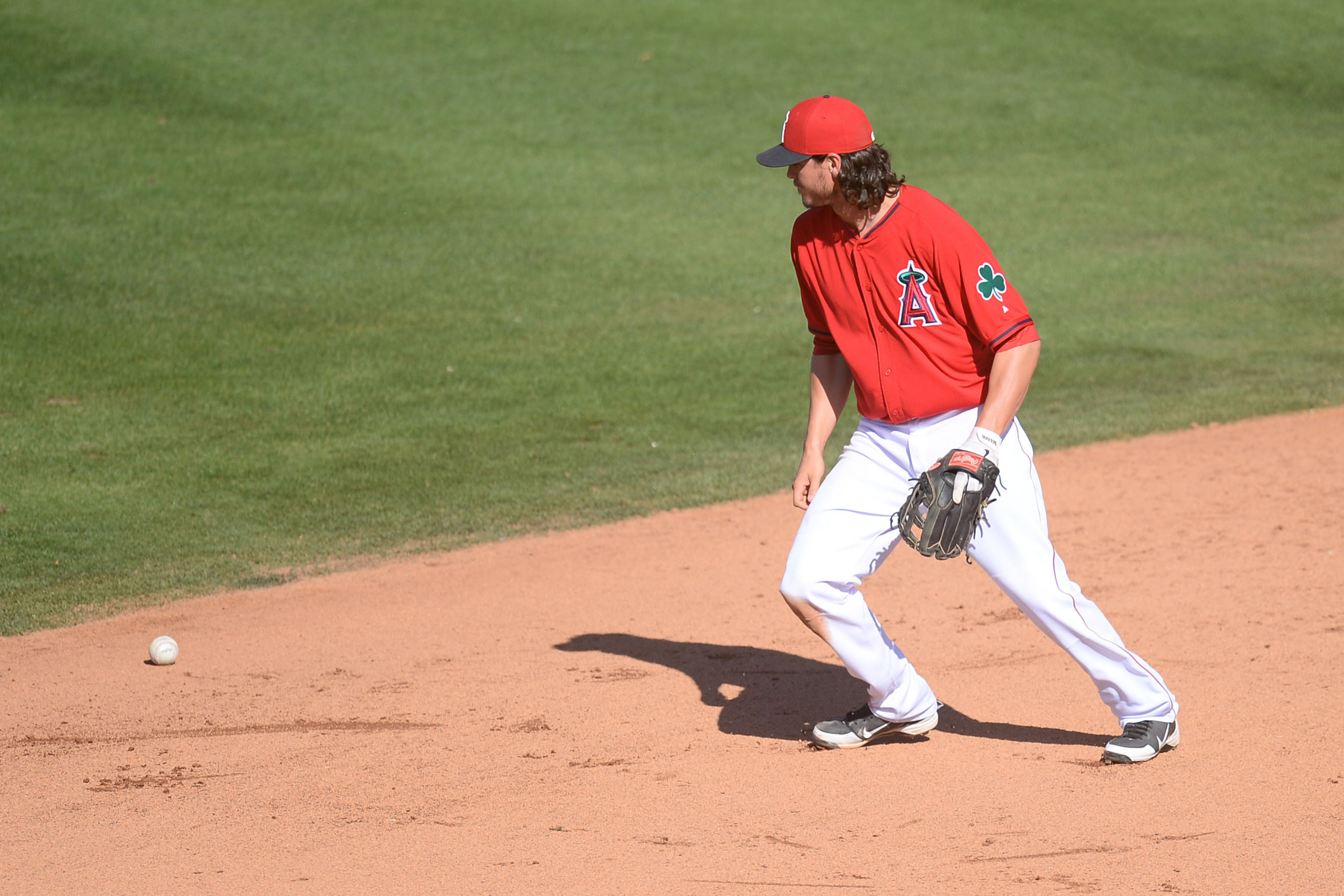 4. C.J. Cron was terrifying in the last A's series. He's a recent first-round pick with an OPS+ of 127 so far in his rookie season. Is he playing every day yet, and if not, why not? What position do you think he'll ultimately wind up playing long-term?

EC: Halos Heaven loves him. The kids this year on the Halos are a gigantic middle finger to those who said that Angels have no talent in the minor leagues. But as I mentioned above, I have no idea. He could hit for the cycle tonight and get sent down so Ibanez can get more at-bats. It is truly frustrating and to quote Chazz from Blades of Glory, "It's mind bottling".

5. Garrett Richards followed up his awful start against the A's (⅔ innings, 5 runs) by tossing eight scoreless frames against the Astros, who are not the pushovers on offense that they once were (6th in MLB in scoring in June despite that shutout). What in the heck went wrong against Oakland, and how can we make it happen again?

EC: I don't know. He's young. He has a lot of A's on his fantasy baseball team. Can't grow cool Oakland A's facial hair. His girlfriend is from Oakland. A Mad Lib of reasons ... Hopefully and respectfully, he sticks it in your ass this series.

6. Closer Ernesto Frieri firmly predicted that the Angels would beat Oakland in this series. Do you like seeing that kind of fire from your players, or would you rather he keep it to himself and make his statements on the field? And, from the viewpoint of an Angels fan, do you agree with his assertion that the A's success can be attributed to "a little extra luck"? (Honest answer please, not going for Bull Durham cliches here!)

EC: OK, so no long, slow, deep, soft, wet kisses that last three days. In regards to Frieri's quote. Love it, Love it ... Manager Mike likes to turn the page. Sometimes you've got to light the book on fire and find a new one. Since Erstad and Percival left a decade ago the Halos have seemed to play with a "whiskey dick." The Angels have been missing those leaders. I hate the professional clubhouse, this how we do things ... The Halos need more red asses and leaders. So yes, I like Frieri's quote. He also might groove you a flat fastball. At least he cares.

In regards to luck, that's lame. I hate the quote "better to be lucky than good." How about just being good. If you are good, like the A's, then luck is just gravy.

7. Would you please write me a haiku about manager Mike Scioscia? I will also accept a limerick.

(Editor's note: I have prepared one instead.)

The trophy's shine fades.
More lasagna than Garfield.
His tenure drags on.

Thank you, Eric, for participating in the Q&A!

The series starts tonight. First pitch is scheduled for 7:05 p.m., Chavez vs. Richards. The Angels bullpen is scheduled to appear at approximately 7:35 p.m.