With the A's and Orioles squaring off for three games, I asked Mark Brown of Camden Chat a few questions about his favorite team. Here's what he had to say!

The Oakland Athletics love playing on the road. Their 20-11 road record is tops in the Majors, and they just started their nine-game trip by taking two of three from the Yankees in New York. The next destination is Baltimore, where none of the starting pitchers are sporting better-than-average ERA's and only one hitter has double-digit homers. The Orioles are the last AL East team that the A's haven't played yet this year. Right now, the plan is to "accidentally" leave Jim Johnson in the bathroom at Camden Yards in the hopes that the O's will just keep him rather than spending the postage to send him back. A white elephant gift, if you will.

Left-hander Wei-Yin Chen has owned the A's in his career so far. He's made three starts against them and allowed only one run in 20⅔ innings (0.44 ERA) with 21 strikeouts and eight walks. Chen is a control artist who isn't going to fall for Oakland's patient ways, so they will have to swing the bats if they want to succeed against him. On the flip side, Tommy Milone has been equally good against the Orioles, with an 0.69 ERA in two starts (one earned run in 13 innings). Miguel Gonzalez is currently day-to-day with an injury, so it's unclear if he will start on Saturday (more on him in the Q&A). The Sunday finale offers an incredible pitching match-up in Scott Kazmir and Ubaldo Jimenez, who were teammates in Cleveland last year and moved to opposite coasts in search of free agent money.

1. Manny Machado and Chris Davis both exceeded 6.0 bWAR last year, Machado with his transcendent glove at third and Davis with his 53 homers. Each is struggling this year. They both seem too good to have been flukes, so what has to happen for these two stars to wake up and start producing?

O's-A's series preview with Alex Hall from AN

O's-A's series preview with Alex Hall from AN

MB: Most Orioles fans would love to know how to get those two to start producing like last year too. If it was easy, they probably would have done it by now. Machado has looked lost at times at the plate and hasn't made the kinds of sparkling plays that spoiled us last year. He probably suffered due to not being able to have a regular offseason thanks to his knee surgery, but how much is that and how much is something else? For a little while, you could write off the struggle with a, "Well, this is like his spring training" excuse. That time has mostly passed.

As for Davis, was it the oblique injury that knocked him out that has sapped his power? He's still a strong dude, but hasn't pulled off the kind of freakish home runs he did regularly last year. He's hitting far fewer doubles as well. Whatever both of them need to do to turn back the clock to last year, I hope they do it.

2. On the other hand, Nelson Cruz is on a mission after getting spurned on the free agent market last winter. If he continues like this and puts up a season like Davis did in 2013, would the Orioles make an effort to bring him back? Or would he simply price himself out of your range if he went back to seeking four years and $70-80 million?

MB: It's hard to imagine Cruz continuing to be an Oriole if he continues to seek four years and $70 million. It's great that he's putting together his season of vengeance while in an Orioles uniform, but there would still be all the risks and drawbacks that kept teams from signing him last year. The best O's fans could hope for with retaining Cruz would be if he decides that twisting in the wind in free agency sucked and he takes the qualifying offer that will almost certainly be extended to him.

3. What is the injury status of catcher Matt Wieters and closer Tommy Hunter? Will we see either in this series? And if not, who is replacing them?

MB: You aren't likely to see either Wieters or Hunter in this series. Wieters has some mystery elbow problem from which he is slowly working his way back into a throwing program, which is currently in the "play catch with a coach" stage. Hunter is expected to go on a minor league rehab assignment this weekend as he works back from a groin strain. There is no replacing Wieters, but as for Hunter, the ninth inning duties were picked up by lefty Zach Britton even before Hunter went on the DL.

4. Has Jemile Weeks gotten a chance to play in Baltimore? And where does he rank on the depth chart at second base? Does he have any future in the organization?

MB: Weeks has played in a whole three games for the Orioles and has otherwise been chilling out at Triple-A Norfolk. Back in spring training, second base looked wide open because some of the candidates would be playing third base in Machado's absence. Now that Machado is back, it's been played almost exclusively by one of the top O's prospects heading into the season: Jonathan Schoop, who played second base through the minors. Schoop has looked like he can handle the position defensively, so with that being the case, it's hard to see where Weeks has much future here. 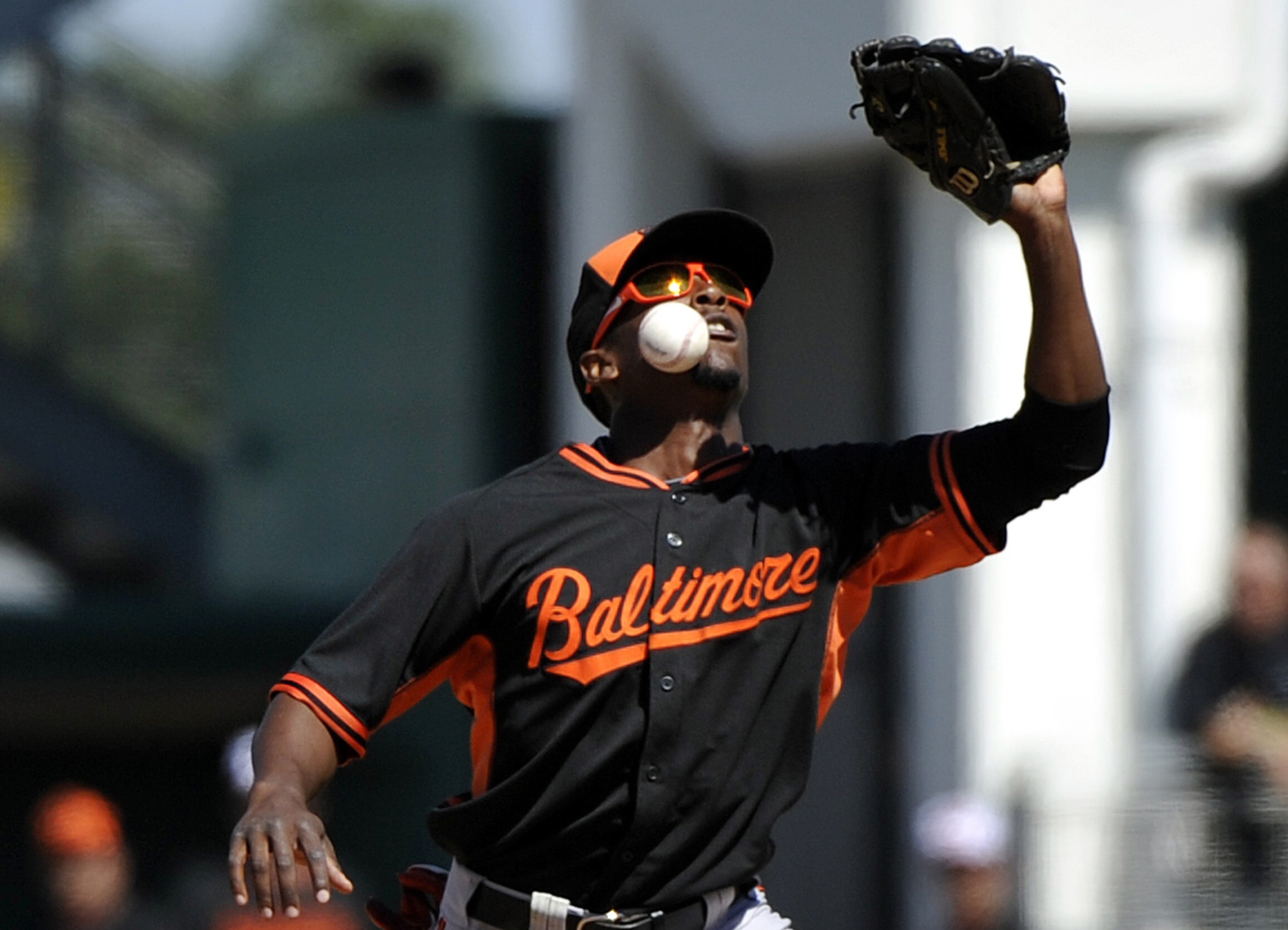 Not much has changed for Jemile Weeks. -- Photo credit: Steve Mitchell-USA TODAY Sports

5. Do you have the instruction manual for Jim Johnson? I don't think you ever sent it along in the trade and now he's not working right. Is there a piece missing or something? How do we fix him?

MB: Even when he was racking up 50 saves a season, Johnson was prone to have horrendous weeks. He blew three straight saves on two different occasions in 2013, and then there was the whole 2012 ALDS mess. You could basically tell within three pitches whether you'd gotten good Jim or bad Jim. Still, it's surprising to me that he hasn't snapped out of his early struggles. Maybe you could try to free his mind with a series of zen koans.

6. Miguel Gonzalez (Sat starter) is a question mark for this series due to injury. What's wrong with him, and if he can't pitch this weekend then who will replace him?

MB: Gonzalez had one of those days where he woke up and his side was hurting in a way that indicated a possible oblique injury. Don't you hate that? They sent him for an MRI, which was said to be negative. But if he's still not up to strength enough to pitch on Saturday, you'll likely see Kevin Gausman, who someone should probably tell the Orioles is one of their top pitching prospects. They keep jerking him around rather than putting him one place and leaving him there. Gausman made one start in the big leagues this year, a surprise start on short rest against Detroit. He was shelled. Guess what they'd be doing if he starts against the Athletics?

7. Baltimore paid a huge price for Ubaldo Jimenez (Sun starter) -- $50 million and a first-round draft pick. Would you make that deal again today?

MB: To say the least, Jimenez hasn't yet lived up to what the Orioles hoped for when they gave out that contract. The good news is we can count down the number of starts until it's over. The bad news is that number is currently 116 starts.

Get to know your Orioles: Ubaldo Jimenez

8. Former Oakland draft pick and farmhand Ryan Webb (4th round in 2004, traded for Scott Hairston in 2009) is in the Orioles' bullpen and pitching well. What's the scouting report on him, and where does he rank among the team's relievers?

MB: When the Orioles signed Webb, the idea was that he might be something like a poor man's Jim Johnson -- the good version of him, that is. He's a groundball-heavy pitcher who has been getting a nice number of strikeouts while minimizing the number of walks he allows. Since Hunter was dumped from the closer role, Webb has been appearing in the seventh and eighth innings and you could probably call him the eighth inning guy.

9. What's more frustrating: Adam Jones has five walks in 255 PA's, or Delmon Young is on the team at all? And can you please finish by writing me a haiku about one or both of those players? I will also accept a limerick.

MB: I expect Jones not to walk, because I've seen him for years now. I don't expect Delmon Young to be on the team when he offers absolutely nothing that is not offered by Steve Pearce -- which is saying a lot.

There once was a player named Jones
Who loved to hack out of the zone
So he swung at a ball
This is Jones, after all
But the pitch only struck his cojones

Thank you, Mark, for participating in the Q&A!

The series starts this afternoon. First pitch is scheduled for 4:05 p.m., Milone vs. Chen. Prepare for an evening full of left-handed offspeed pitches making large hitters look silly. This is Milone's first career start at Camden Yards after beginning his career in nearby Washington, D.C.