It's time to stop laughing at the Astros

Those who show them mercy now will be spared when they take over the world in the next few years.

Share All sharing options for: It's time to stop laughing at the Astros

One consistent reality of baseball is that there is always a terrible team to laugh at. The identity of that team changes on a regular basis, but there's always someone. It was the A's in the mid-to-late 90s, as they finished in last place four times in six years and bottomed out at 97 losses in 1997. But then, Billy Beane took over and we never looked back. The Tigers were that team in 2003, when they lost an AL-record 119 games, but they bounced back quickly and three years later they were in the World Series. The Devil Rays had a good long swim in the Sea of Punch Lines, including the nickname Deviled Eggs courtesy of ESPN, but then they found that saving on ink is a great way to cut costs (why do you think the Athletics are called the A's?) so they exorcised the "Devil" from their name in 2008 and immediately went to the World Series. Even as these teams came and went, we always had the reliably terrible Royals and Pirates as a sort of comfort zone to turn to, because hey, it could be worse -- you could be a Royals fan. But then both teams got good in 2013 and ruined two decades of laughter.

But then, there's the Astros. They went to the World Series in 2005, and then quietly declined over the next five seasons. Then, in 2011, they began one of the worst runs in MLB history by losing 106, 108, and 111 games in three straight years. And there was laughter. There were GIFs. There were jokes. They escalated year after year, and deservedly so. If a team got routed by another team, there would be Astros jokes. If a player had a horrible game, there would be jokes that he should play for the Astros. When the Astros did something bad, there were jokes, because Astros gonna Astro. If they actually beat someone, then there were even more jokes, because how did you lose to the Astros??

Well, it's time to stop. I wrote last winter about how Houston's rebuilding process was finally on the right track and how the turnaround would begin in 2014. That wasn't a particularly bold prediction, because it's virtually impossible not to improve on a 111-loss season, but I was talking about substantial strides and a potential 90-loss campaign. And now, as per my hypothesis but not necessarily for all of the specific reasons I cited, the Astros are finally showing tangible signs of improvement.

For starters, Houston is not even the worst team in baseball anymore. They currently have a better record than the D'Backs, Rays and Cubs, and are right on the heels of the Phillies. They are still among the worst teams in the sport, but they are no longer the far-and-away laughingstock that they have been in the last three seasons. It is entirely feasible, on a given day, that the Astros might be better than the team they are playing.

The Astros' current record is 25-35 entering Thursday. That's still bad enough for last place in the AL West. However the West is, at this moment, unarguably the best division in baseball, with three teams at .525 or better, a fourth-place team one game under .500, and three of the six best run differentials in MLB. Furthermore, they would not be in last place in three of the other five divisions, which is a big step. Their .417 winning percentage puts them on pace for 67.5 wins; if we round that down, then they're looking at 67-95. That's just regular bad, not historic, laughingstock bad.

Not only is the team inching toward "only" 95 losses, but there is reason to think it could get even better. This next stat is going to absolutely blow your mind: Houston had a winning record in May, at 15-14. Included in that record was a seven-game winning streak, in which the Houston Astros won seven consecutive games. You can't win that many in a row without sweeping somebody; in this case, it was the Royals, on the road in Kansas City. That streak is over, but on Tuesday they beat C.J. Wilson and the Angels (though apparently that isn't tough to do).

Most importantly, this run of improved play isn't just a random fluctuation. It's happening because the future stars of the club are finally arriving. That all starts with uber-prospect George Springer, who swatted 10 home runs and posted a 1.032 OPS in May after struggling in his first couple weeks in the Majors. Jose Altuve batted .357 with 11 doubles last month and is hitting like an All-Star at age 24. Chris Carter got his average up high enough to slug .500 for the month. And on Tuesday, top-100 prospect Jon Singleton made his MLB debut and homered in his fourth at-bat. Singleton is a key figure here, because first base has been by far the biggest offensive black hole on the club and he has the chance to turn a huge team weakness into a legitimate strength. 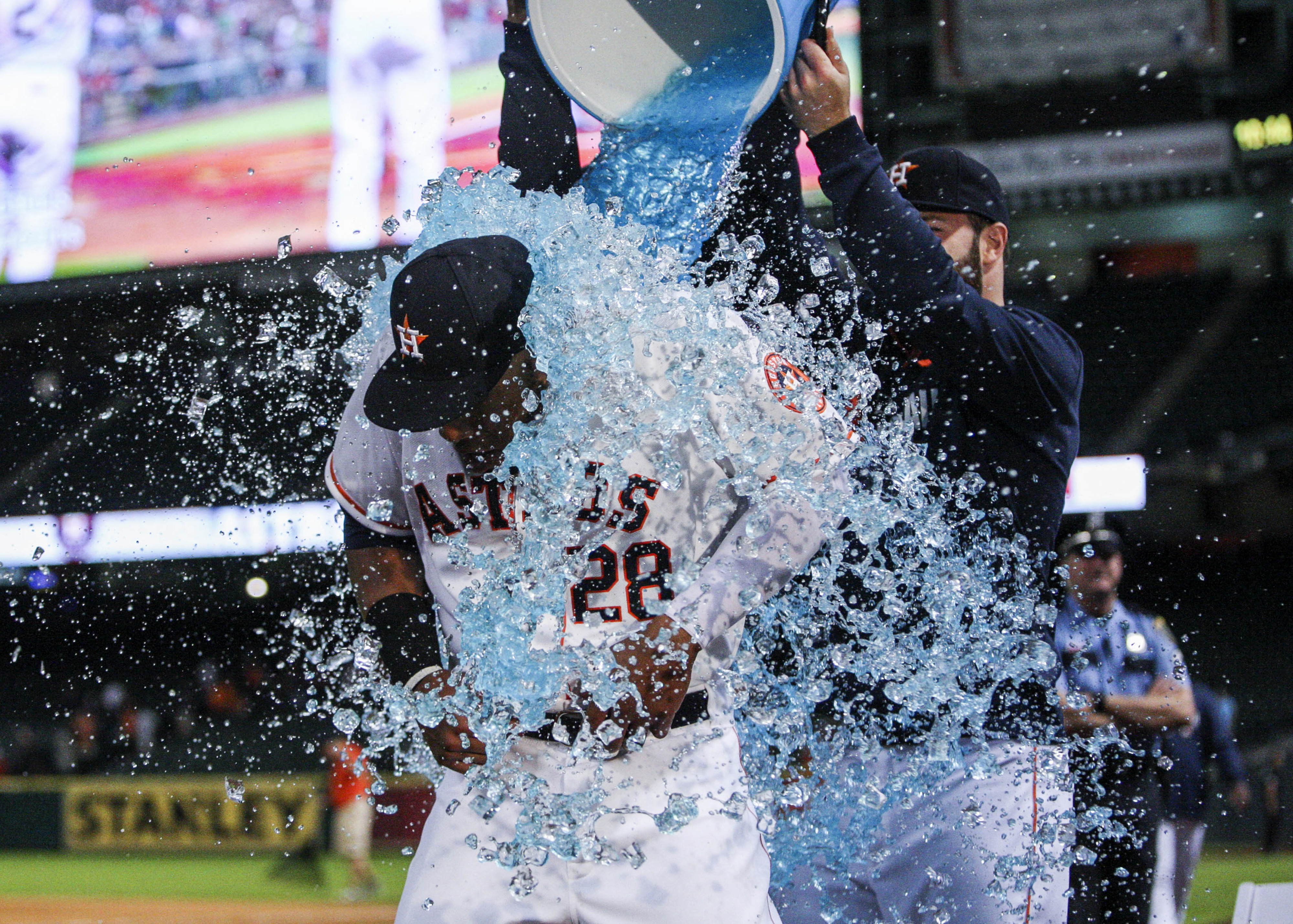 On the pitching side, Dallas Keuchel has been the big story of the season. He contributed to the May run by posting a 2.14 ERA in six starts and walking only seven batters in those games; his overall season line now includes a 2.70 ERA, an average of seven innings per start, more than four strikeouts for every walk, and a tie with Yu Darvish atop the AL pitching leaderboard with 3.0 bWAR. Once again: according to Baseball-Reference, it's an argument between Darvish and Keuchel for best pitcher in the American League.

It's not just Keuchel, either. Jarred Cosart had a 2.76 ERA in five starts last month despite continuing to post atrocious peripherals (15 strikeouts, 15 walks), and Brad Peacock is settling down after a rough April (5.95 April ERA, 4.02 in May) while striking out a batter per inning. But the real surprise has been Collin McHugh, who was snatched off waivers in December. You may remember him from his start against Oakland in late April, when he came one out away from throwing a shutout. He kept pitching well in May, and he's got a season ERA of 2.52 with 54 strikeouts and only 14 walks in 50 innings. It's unlikely that he can maintain his low hit and home run rates, but with a strikeout-to-walk ratio like that he will be able to withstand some regression on batted balls and still remain effective. So far, it looks like the Astros found a gem in McHugh at a time when they could really use anything going their way. What, you think Billy Beane is the only one who find quality players on the scrap heap?

Add it all up, and the roster isn't awful. The team has an above-average player at second base and right field (and maybe first base with Singleton), and at least average production (with upside) from catcher, third base, center field, and DH. Shortstop is weak, but 2012 No. 1 overall pick Carlos Correa is working his way up the ranks. There are three or four solid starting pitchers. The bullpen is still bad, but that's the easiest thing to fix.

I don't know how the rest of this season is going to go. Perhaps the Astros will fall back into their old tricks and lose 100 games again. Perhaps the league will adjust to Springer and he'll go back to struggling. Perhaps Singleton will fail to clear the outfield fence again and will be sent back down to Triple-A for more seasoning. Perhaps Keuchel and McHugh are mirages who vanish in the second half. But what is far more likely is that this team has finally turned the corner in its rebuild, and that it is now on the upswing toward its next winning season and its next playoff berth. That some of the players on the current roster will, in fact, be on the next good Astros team. It won't happen this year, but it will come sooner than you think. After all, there are now some Astros, both hitters and pitchers, who I would welcome on the A's in a heartbeat. That's more than you could have said for the last three permutations of this Houston club.

The Houston Astros are no longer the worst team in baseball, and I'll bet right now that they won't have the worst record on Sept. 29. You can continue laughing at them if you want, but I sure as heck won't.* Pretty soon, the joke is going to be on us.

The Astros are set to pick first in today's MLB Draft for the third straight year. One of the best farm systems in baseball will get even more stacked.