With the A's and Tigers squaring off for three games, I asked Rob Rogacki of Bless You Boys a few questions about his favorite team. Here's what he had to say!

Share All sharing options for: Tigers Series Preview: Q&A with Rob Rogacki of Bless You Boys (2)

Oh, if only every game could be against the National League. The Oakland Athletics improved their record in interleague play to 7-1 by sweeping the Marlins over the weekend, but now they must return to the American League with a re-match against the Central-leading Detroit Tigers. The Tigers are still the same old team in spirit -- a tough starting pitcher every day and a lineup propped up by a couple elite boppers in the middle. The A's are probably the stronger club, but being good on paper doesn't guarantee you wins. They'll need to go out and prove their superiority, on the road, in the third city on their current trip. Oakland is 4-8 in the third stop of a three-city road venture this year, so travel fatigue is something to keep in mind. The last time these teams faced (in late May), they split four games in Oakland. Standard reminders: The A's are 51-30, best in baseball, and they enter this series on a four-game winning streak.

Kazmir finally turned in a stinker in his last start, for the first time all year. The Mets tagged him for seven runs in three innings, which bumped his ERA from 2.08 to 2.66. I wouldn't expect a repeat of that failure; Kazmir will bounce back. Sanchez is having exactly the year you would expect, with a low ERA and great peripherals and a DL stint already under his belt. This is a re-match for these two -- the first time around, Kazmir allowed one run in a complete game, Sanchez took a shutout into the ninth (9 K's, 1 BB, 3 hits), and Kaz was saved when Josh Donaldson launched a three-run walk-off homer off of closer Joe Nathan. Buck Mills didn't walk a batter against the Mets in his last outing, which was an interesting development after his wild debut. Porcello is finally having his breakout season; he walked six in a shaky start against the A's in May but still ended up with the win. Verlander has an ERA+ of 87.

1. Austin Jackson has always been a bit inconsistent from year-to-year, and 2014 is no different. He was bad in 2011, then he hit like an All-Star in '12, then he was decent in '13, and now he's bad again this season. Strikeouts are no longer a massive problem for him like they once were, so what's going wrong? Will he ever settle into a groove, for better or for worse, or will he always be all over the board like this?

RR: When it comes to Austin Jackson, Tigers fans are just as stumped as you are. He started off the season with a bang, hitting .307/.391/.520 in April with 13 walks and 14 strikeouts. Then, the strikeouts started to pile up. He whiffed 22 times in May to just six walks, and his OPS was a lowly .534. June's OPS is slightly better at .645, but he still isn't walking enough for my liking. His line drive rate is still at 23 percent -- right around his career average -- but his BABIP is low (for him) at .299. This could also be due to his 43 percent fly ball rate, by far the highest of his career.

Part of the problem may be that the Tigers themselves don't know what to do with Jackson. He was hitting fifth in the order for a while, but his struggles and J.D Martinez's emergence have led to Brad Ausmus moving Jackson up and down the lineup with little rhyme or reason. In his last 10 starts, Jackson has hit first, second, sixth, or seventh.

The worst part for the Tigers may be that Jackson's offensive struggles seem to have followed him onto the field. He has been worth negative-6 defensive runs saved this season, and his UZR/150 is a very un-Jackson-like negative-15.1. While defensive metrics take much longer than half a season to stabilize, the eye test matches what the numbers say. He looks a step slower in the field compared to years past, and his outright refusal to dive for fly balls drives some fans crazy.

2. Who is playing shortstop now? Alex Gonzalez lasted but a few weeks, and Andrew Romine has an OPS+ of 47. Is there a new face? And if so, who is he and how is he doing?

RR: Some may refer to him as the second coming of Alan Trammell (he's not), but Eugenio Suarez has taken Tigerdom by storm in the month of June. He homered twice in his first three starts, which tripled the number of homers Tigers shortstops had in the 57 games prior to his first start. Suarez has stayed hot throughout the month, hitting .297/.384/.516 with seven extra-base hits. While the power is nice, his plate discipline has been a pleasant surprise. He has nine walks in 76 plate appearances, a slight bump above the 9.5 percent walk rate he has in the minors this season. He is no Jose Iglesias in the field, but his bat is a big reason why the Tigers are back on track after a rough stretch in late May.

3. Rick Porcello (Tue starter), who is somehow still only 25 years old, looks like he's finally arrived. He has a 3.41 ERA (122 ERA+) and is second in the Majors with 10 wins, for whatever that's worth. Do those wins signify that he is a top-of-the-rotation starter now, or just that he's a guy who can go deep into games and keep the team in a position to succeed? What, if anything, has he changed this year that has allowed him to improve so greatly? (2010-2013: combined 90 ERA+)

RR: Oh, what a difference a couple of starts can make. Two weeks ago, Porcello's ERA was 4.03 and fans were writing this season off as "same old Rick Porcello." Fifteen scoreless innings later -- including his first career shutout against the Texas Rangers last week -- people are back on the "breakout season" bandwagon. If anything, the breakout year was in 2013, but a pair of awful starts against the Los Angeles Angels ruined his ERA and masked the improvements he made. His 3.53 FIP was a career best (and better than this season's 3.80) and he struck out a career high 142 batters in 177 innings.

Since Tuesday is July 1st, let's look at Porcello's production from the previous calendar year. Since July 1, 2013, Porcello is 21-9 with a 3.44 ERA and a 2.78 strikeout-to-walk ratio. Only 14 qualified AL pitchers had a lower ERA last season, while only one -- teammate and reigning Cy Young winner Max Scherzer -- had as many wins. I don't know if this makes Porcello a top-of-the-rotation guy, but I'm more than comfortable with him as the Tigers' fourth starter.

To me, the biggest difference in Porcello's game is his ability to pitch deeper into games, as you suggested. He has pitched six innings in 12 of his 15 starts this season, and is one of two Tigers starters (Verlander being the other) who has made it through five innings in every start this year. There's a lot of value in the ability to take the ball every fifth day and eat innings, and Porcello is doing that more than ever in 2014. 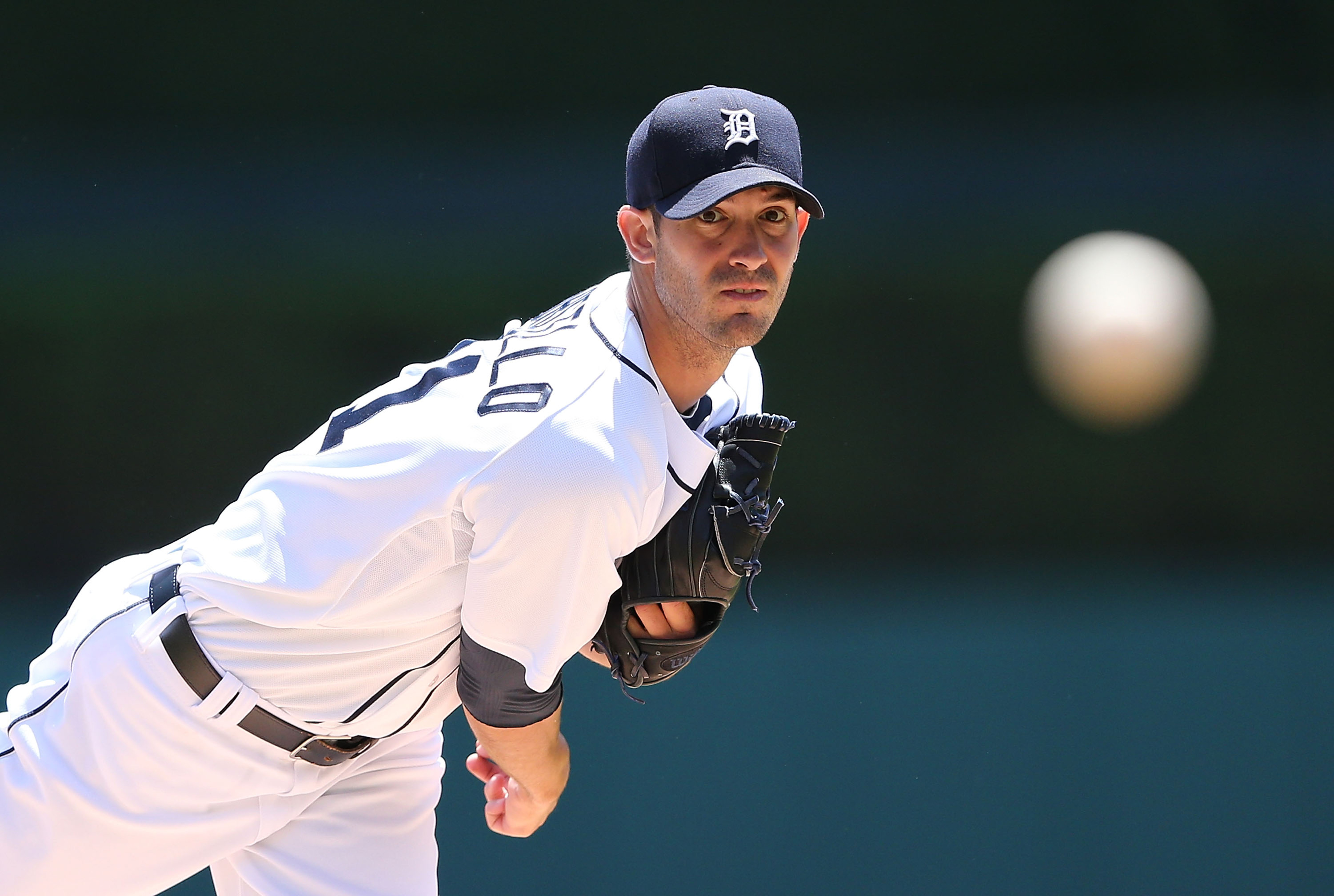 Personally, I liked Porcello a lot better when he was serving up the walk-off hit in Game 2 of the ALDS. -- Photo credit: Leon Halip

4. You recently wrote a fantastic article for SB Nation about the struggles of Justin Verlander (Wed starter), who has a 4.80 ERA and shaky peripherals. Can you give us a summary of what you had to say about him in that post?

One of the main points that has been swept under the rug as people line up to bury Justin Verlander's career is that Verlander had core muscle repair surgery back in January. He got off to a great start this season, pitching a scoreless spring before having one of his best Aprils ever, but the wheels fell off soon after. His numbers show a sharp drop-off in production after 75 pitches thrown, which suggests that he may still be recovering from the surgery. This isn't to suggest that he or the team rushed him back recklessly, but rather that Verlander should improve as the season goes along and he continues to improve his strength and endurance. There have been some mechanical issues as well, which may or may not be related to the surgery. However, as you saw first-hand last October (sorry), the Tigers have gotten him back on track before and should be able to do it again in 2014.

5. Joe Nathan has a 6.37 ERA and five blown saves. Is the 39-year-old finally reaching the end of his rope, or do you think he'll bounce back from his poor first half? And if he's done, then what specifically has gone wrong for him?

RR: I was surprisingly optimistic when the Tigers signed Nathan last offseason despite the warning signs, namely his age and a minuscule home run rate in 2013. The home run rate has regressed this season and his strikeout rate has dropped off as well. A lot of this has to do with his command, which has all but disappeared. Nathan's once-pinpoint fastball command has more closely resembled blind dart-throwing in 2014, resulting in pitches right down the middle or nowhere near the strike zone.

To go along with the poor command, Nathan is also not getting whiffs as often as he used to. His 8.6 percent whiff rate is the lowest of any season in his career save for 2011 when he was recovering from Tommy John surgery. I would like to think that Nathan can turn things around, but it seems that Father Time has finally caught up with him.

6. If you could set aside contracts and general reality and add one active MLB player to this Tigers team right now for free, who would it be and why? (no corresponding moves except dropping one player for roster space; you might choose to add the best player available, or maybe there is a specific need you'd like to fill)

Don't expect too much from Andy Dirks

Don't expect too much from Andy Dirks

RR: I think the answer is obvious here, and that player would be Mike Trout. Not only do the Tigers have somewhat of a hole in center field right now with Austin Jackson scuffling, but Trout is simply the best player in baseball. I remember seeing at one point in May that he was struggling -- by his lofty standards, at least -- and then checking back last week to see that he has a 182 wRC+. I would hate to be the pitcher who has to face a lineup of Kinsler-Trout-Cabrera-Martinez to start a game, as it very well could be something we see in this year's All-Star game. Plus, the MVP debates would get even more interesting with Trout and Miguel Cabrera on the same roster.

7. Can you please write us a haiku (or a limerick) about long-time Oakland favorite Rajai Davis?

Thank you, Rob, for participating in the Q&A!

The series starts this afternoon. First pitch is scheduled for 4:08 p.m., Kazmir vs. Sanchez. Their last matchup lasted two hours and 26 minutes (2:26), so you should be able to fit this game in before dinner. Heck, depending on the length of your commute, Doolittle might throw his final pitch of the night before you even get home from work. Just to get you pumped up, here is the win probability chart for that game; see if you can guess where Donaldson hits his walk-off homer. He's unlikely to hit another walk-off in this one due to the fact that it's a road game.