You get the food references, right? OK good. What a series -- each game tight, tense, with twists and turns a-plenty, more bizarre moments than you could conjure up in your wildest alcoholic dreams. The one constant? At the end of every game, the A's had a win.

I will break the recap into two sections: What happened and then all the little strange moments that made this game, like every baseball game ever played, truly unique.

Oakland trailed 1-0 after 2 pitches when Tommy Milone gave up a triple to leadoff hitter Christian Yelich, who then scampered (scampi?) home when Alberto Callaspo's relay throw eluded Josh Donaldson. That unearned run charged to Tommy Milone was the only blemish on Milone's record through 6 strong innings. Milone wound up going 7 IP on a day when the A's desperately needed him to be both good and to get deep into the game.

That score stood up until the top of the 6th, as the A's were pretty helpless against LHP Andrew Heaney. Though he rarely hit 90 MPH on the radar gun, Heaney showed terrific fastball command and a sharp slider and blanked the A's until 2 outs into the 6th inning. Then Callaspo singled to LF, Yoenis Cespedes broke his bat and dropped a flair into RF for a hit, and Josh Donaldson tied the game 1-1 with a single to LF.

Up strode Nate Freiman, who apparently got the memo that if the A's add you to the roster you must immediately perform brilliantly. Freiman launched a 3-run HR to LF to give the A's a sudden 4-1 lead.

Marcell Ozuna's pinch hit HR off of Milone cut the lead to 4-2 in the bottom of the 6th, and the Marlins scratched out a run in the 7th to make it 4-3. However, Fernando Abad and Ryan Cook -- pretty much the only relievers available -- combined to get the last 6 outs, with Cook earning a 4-out save.

The many bizarre moments

There were so many strange moments on the field, but there were also a couple outside the field of play. A Nick Punto foul ball apparently was so vicious it injured not one fan but two, necessitating about a 10-minute delay as ambulance and stretcher were summoned. Hopefully everyone is ok. Soon after, a bank of lights went out delaying the game another 8 minutes.

Milone made one of the best defensive plays you'll ever see, though in classic Milone style he made it look so easy that it didn't appear to be as incredible as it was. On a ground ball to the right side hole, Freiman ranged too far to his right (I know -- A's 1Bmen never do that) and so when Callaspo fielded the ball in short RF he had to throw quickly to Milone racing to cover 1B. Callaspo's throw was to the RF side and wide of the bag, but in stride Milone somehow managed to reach down, corral it on a difficult "in-between hop," and catch it just as his foot dragged across the bag.

The next inning, Milone proceeded to make a boneheaded play, trapping Jeff Mathis off second base on a comebacker but instead of running at Mathis he fired the ball to 2B. Mathis jogged to 3B, putting runners at the corners with only one out.

Next batter? Reed Johnson laced a bullet right past Milone's head and Milone speared it for an easy 1-3 DP. Milone giveth and Milone taketh away.

How about Stephen Vogt, with the A's leading 4-3 in the 8th, 2 out and the bases empty, receiving a changeup above the belt from Abad that was swung and missed for strike 3 -- and completely missing the pitch for a passed ball. All that did was to bring Giancarlo Stanton to the plate representing the go-ahead run. Fortunately, Cook came in and retired Stanton on a comebacker on the first-pitch.

Finally, as we celebrate a sweep that puts the A's 51-30 halfway through the season, on pace to win 102 games, I would like to introduce you to De Plume! Yes, this is my gnome De Plume. His bling is key chains from Amsterdam, Geneva, and Venice. 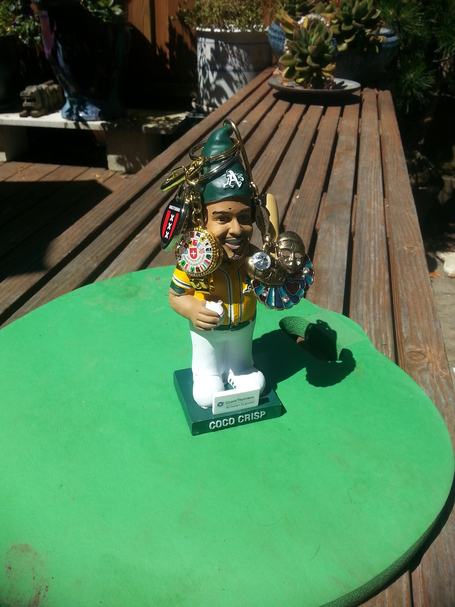 See you in Detroit!