The Oakland Athletics defeated the Miami Marlins 7-6 in 14 innings to earn their 50th victory, but there is so much more to talk about. The time of the game was 4:47, the A's emptied their bullpen and the Marlins used five relievers of their own. How did that happen? You can figure it out yourself with my scorecard . . . 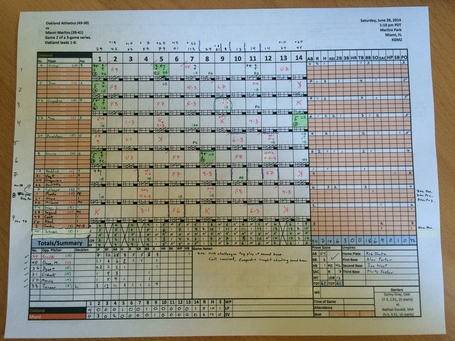 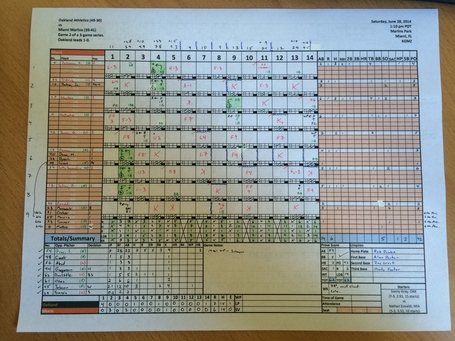 A's jump on Eovaldi in the 1st, but he settles down

Nathan Eovaldi started this one for the Marlins at 1:10 pm by putting himself in an early deficit. The A's batted around and scored four times until the National League reared its head and forced Sonny Gray to pick up a bat. Gray acquitted himself well, fouling off a couple of pitches, but he ultimately was down swinging. I knew there was a good reason Connie Mack bought into the American League dream in 1901.

After the first, however, Eovaldi mowed the A's down like the first inning never happened. It's easy to pretend when the number one hitter just leads off again I suppose. Eovaldi faced the minimum over the next three innings, getting through those innings in 30 pitches, for a total of 59 pitches through four.

Sonny gets roughed up, continuing string of tough road starts for A's

In the first three games of this road trip, Athletics starting pitching has found itself out of the game earlier than we've been accustomed to this season. Scott Kazmir exited after giving up seven runs in three innings against the Mets, Brad Mills did the best handing on for 6⅓ innings and three runs allowed, and Jesse Chavez was out of the game after facing four batters in the sixth inning yesterday without recording an out, all of them ultimately scoring.

Sonny Gray continued the trend by only getting through five innings. He let the Marlins bat around in the second, scoring three, and seven came to the plate in the fourth as the Marlins scored two. Most troubling is that he hit two batters (though the first on Derek Dietrich could have been called back for leaning into it) and walked three (one intentionally) while striking out just four. A lot of the batted balls seemed a bit lucky, however, and on another day Sonny's performance could have scratched out a quality start. He left the game behind 5-4 after five innings.

As the Marlins came to bat in the third inning, Stephen Vogt ran out to right field. Ultimately we found out that Reddick suffered a right knee strain, the same knee Reddick previously hyperextended that sent him to the disabled list earlier this month. Reddick will be getting an MRI to determine the extent of any damage.

Reddick says it was sharp pain on inside side of knee. That doesn't sound good.

Nate Freiman has been scratched from today's starting lineup. Daric Barton moved to 1B and Anthony Aliotti inserted as DH.

One of the more unusual Gameday summaries: Strikeout, run(s).

Down 4-5 in the fifth inning with one out and two strikes and Coco Crisp at third base, Brandon Moss swung on and missed a Nathan Eovaldi ball in the dirt that skipped away from catcher Jarrod Saltalamacchia. Saltalamacchia recovered the ball quickly, looked Crisp back toward third base and threw to first to record the out on Moss, but Coco Crisp came home as Saltalamacchia wandered above the plate to clear himself on his throw. Unable to get back in position, Crisp avoided Salty's tag to tie the game at five after five innings.

Ryan Cook and Fernando Abad each through 1-2-3 innings for the Athletics and Eovaldi eventually got through the seventh inniing, leaving the game tied at five. Mike Dunn entered the game in the eighth inning and promptly gave up a double to Jed Lowrie.

Stephen Vogt tried to bunt Lowrie over, but swung away and fouled off one pitch and bunted another pitch foul. On two strikes, Vogt pulled the ball to the right side to the second baseman Derek Dietrich, moving Lowrie to third. The red-hot Alberto Callaspo came to the plate and fouled off pitch after pitch. Finally on the ninth pitch of his plate appearance, Callaspo singled up the middle, scoring Lowrie to give the A's a 6-5 lead.

How many times must we show you? Don't run on the A's (except maybe Coco unless you are Mike Trout)

Luke Gregerson entered the eighth inning and quickly struck out Donovan Solano. Jake Marisnick sent a cue shot up the first base line under a stumbling Brandon Moss to Craig Gentry. Marisnick inexplicably turned toward second, and Gentry's strong throw beat him there by five feet and he was called out by second base umpire Joe West. Curiously, Jed Lowrie applied an awful tag waiting for Marisnick to arrive at his glove and replays indicated Marisnick may have had a case at safe. The Marlins did not challenge, however.

Yo, how can you be so silly when you are so good?

In the top of the ninth with one out, Brandon Moss struck out swinging and Yoenis Cespedes beat the throw to second base, called safe by Joe West. However, as Cespedes began to stand up while the tag was still being applied by shortstop Donovan Solano, Cespedes ever so briefly lifted his foot off of second base. Marlins manager Mike Redmond was out quickly to ask Joe West for a review, and after an extraordinarily long delay considering how clear the call was, West took off the headset and signaled out to end the inning. Sean Doolittle was coming in.

As Sean Doolittle entered the game, he was sitting on 7⅔ consecutive innings without allowing a base runner, just four outs from a relief perfect game. After a strikeout to bump that sexy strikeout-to-walk ratio to 56-to-1, woops.

Stanton with a double, ends streak of 24 consecutive batters retired by Doolittle.

Not to worry, Doolittle was also sitting on a 26⅔ consecutive inning scoreless streak. Woops.

And RBI single by McGehee ends Doolittle's scoreless innings streak at 26 1/3 IP. Game tied back up.

Despite McGehee eventually getting to third base, Doolittle escaped the inning, now tied at six. Bonus baseball!

Free baseball arrived with the A's turning to Dan Otero for two scoreless innings before turning to Jim Johnson. Meanwhile, the exhausted Marlins bullpen had pitched, including the two innings pitched through regulation, 16 innings over the previous three games, with many more innings to come. Nevertheless, zero after zero came up, with the Marlins never really threatening. It's almost an afterthought that the A's took the lead in the 14th inning after a Brandon Moss two-out double and a Josh Donaldson single to score Moss.

A pitchout worked in the 11th inning, catching Reed Johnson in a rundown.

@ProducerLos This is why I buy the ultra-fine tip pens. pic.twitter.com/Dq52ahEoJy

Although Derek Norris was on the bench, he was still being held out to let his back recover after leaving the game early Friday. Instead, Tommy Milone batted for Dan Otero in the 12th inning. He flew out to center, but his plate appearance will give him a unique place in Oakland's history book tomorrow:

With righties Jeff Baker, Giancarlo Stanton, and Casey McGehee due up for the Marlins, the A's really wanted Jim Johnson to pitch a third inning and not the left-handed Jeff Francis. However, having used everyone except the recovering Norris, Jeff Francis, and starters Jesse Chavez, Scott Kazmir, and Brad Mills, Jim Johnson had to bat to stay in the game. He took five pitches and was out on strikes.

I should note first that Jim Johnson offered a fantastic performance when the A's needed him. A 1-2-3 12th inning, followed by a critical strikeout in the 13th to leave stranded a Marlins runner in scoring position, got the A's to the 14th in a position to win it. The 14th itself was tricky, but could have easily been worse. Giancarlo Stanton only singled off Johnson, and Casey McGehee bounced to second a little too slowly so that Johnson could only get one out.

At this point, A's manager Bob Melvin came to the mound to talk with Johnson with Jeff Francis warmed up. I would love to have been a fly on one of those jerseys, but we know the result: Johnson stayed in to face the lefty Garrett Jones. Johnson got ahead of Jones 0-and-2, but Jones singled, moving McGeehe to second. The Marlins turned to their last bench player, catcher Jeff Mathis, to bat in the pitcher's spot. Sadly, Johnson bounced a wild pitch and then Mathis walked to load the bases with one out. Melvin popped out of the dugout again, this time to call on Jeff Francis to try to find a miracle save.

Jarrod Saltalamacchia stepped in and Francis moved ahead 0-and-2. After a couple of waste sliders, Francis suddenly found the sinker and home plate umpire Rob Drake called strike three on Salty, ending the sacrifice threat. All that stood between Francis and a save was Donovan Solano, who already had two walks and an RBI single in this affair.

Solano, however, swung at the first pitch he saw: a sinker lifted right at Craig Gentry who squeezed the ball for the final out in perhaps the highest leverage situation for the A's since Jerry Blevins escaped two-on and nobody out with a one-run lead on the road against the Angels two years ago.

Jeff Francis came into the game with 1264.2 innings pitched. This was his first career save. Well done.

And now my final thought

At 50 wins through 80 games, the A's are the only team in baseball on pace for at least 100 victories, and would be the first American League team to get there since the 2009 Series-winning New York Yankees. For tomorrow's 10:10 am start, the bullpen might get used in ways we really would not prefer unless Tommy Milone can will his way to a deep start. No pressure, Tommy. He faces the left-handed Andrew Heaney tomorrow. Derek Norris may be available for that game.