You can still give to Alameda County Community Food Bank today.

On Monday, Athletics Nation began a campaign to benefit Alameda County Community Food Bank. We started this in response to some ugliness directed toward Jim Johnson's wife, Elizabeth, while she was helping the A's collect canned food and donations for the Food Bank, as reported by the San Francisco Chronicle's Susan Slusser. It was a sort of ugliness that deserves our maximum opprobrium. But rather than wring out hands about how terrible these wrong-doers were, however, our community campaigned to support the cause Elizabeth Johnson just wanted to help, and this community has a lot it can be proud of.

We set an initial goal of $500, not really knowing how the campaign would go, and happy to raise any amount. As the donations quickly piled up in the early going, however, we raised our goal from $500 to $1,000, and then we realized that we needed to jump our goal number way up with Twitter support coming in from the likes of

Thank you to all of them for helping make this campaign so successful.

Pick a number, hit a number

But what amount to choose? Nico, in honor of Jim Johnson, picked $4,545, his number twice. At 5:22 pm, someone (Amanda McCarthy? Cindi?) cheekily pushed our total to a triple Johnson:

After some celebrations, however, we weren't done. Further tweets were sent out encouraging others to still give. We asked the reddit community at /r/OaklandAthletics to give what they could, but we wanted a nice solid number for our own community by the end of the night. Around 9:45, with AN's separate total hanging a stubborn $5.65 short of exactly $5,000, Nico pleaded:

Someone answered his prayer, leaving us with this neat summary: 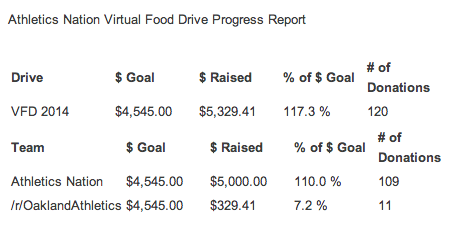 The number has jumped since then, and as of midnight, our campaign raised $5,864.94 from 128 donations, for an average gift of $45.82, or Jim Johnson and a Jed Lowrie and a Cliff Pennington. Sean Doolittle's girlfriend, Eireann Dolan, let us know that Elizabeth Johnson and the rest of the A's wives and girlfriends were all thrilled. You can read Elizabeth's message to us in yesterday's post.

Not only did 95.7 the Game host Troy Clardy offer some Twitter support, he also lauded our community during his Monday night show in a way that completely reflects my own feelings on the good work we've done here. Listen at this link (auto-plays, skip ahead to 25:20), and here are some selected quotes:

So I give a little shout out to the Athletics Nation blog because they heard about the story. And what they decided to do was to, [considering] Elizabeth Johnson was collecting donations for the Alameda County Community Food Bank . . . what athleticsnation.com decided to do was to start a virtual food drive. . . . Athleticsnation.com decided to make it right. Not only did they reach their total, they surpassed it, they surpassed the goal. . . .

[I]t is truly englightening when people turn a negative story into a true positive, not just for themselves and have good intentions doing it, but also make people's lives better in the process. . . . I'm glad that someone somewhere out there decided to take the initative and turn this into a true positive. A major positive. . . .

Big ups to Athletics Nation. Congratulations to those guys, and major congratulations to all those who actually put a happy ending on this story. Kinda restores my faith in humanity a little bit.

You did this, everyone. Whether you could give $45.45, $4.50, or even a retweet, you helped a lot of people in need this week. I've never been prouder to be a part of this community. Thank you.

You can still give to Alameda County Community Food Bank today through the Virtual Food Drive, or you can visit the Coliseum during Wednesday home games and bring in at least five cans of food or $5 to receive a two-for-one plaza level ticket voucher.