The A's look to complete the sweep in the series finale.

Hello everyone and welcome to another MLB-leading win-streaking edition of A's baseball.

Nico and I swapped games this week, which means Nico can get his momma a "Coco Crisp" (i.e. stock black guy #2 in the Chinese Factory) garden gnome in the wake of yet another heroic game-winner by the Cereal Killer. And which also means for the first time on a weekend, you'll be stuck with me as your host (sorry in advance for the lack of puns).

Tommy Milone takes the hill today against Jon Lester. Lester has been routinely dominant against the A's, and Milone has had trouble with the Red Sox. A lot of Milone's issues with the Sox at can be attributed to Fenway Park (last start: 4 IP, 6 ER) which is pretty much the worst environment for a soft-tossing lefty. Today he'll be in the friendly confines of the Coliseum, and armed with mechanical improvements that have led to him allowing just 13 earned runs in 50⅔ innings across 8 starts. He's been locked in for the most part.

Ironically, Coco isn't in the starting lineup on his own gnome day, but rest assured he will be clutching his bat and ball in anticipation of getting his chance in the later innings. 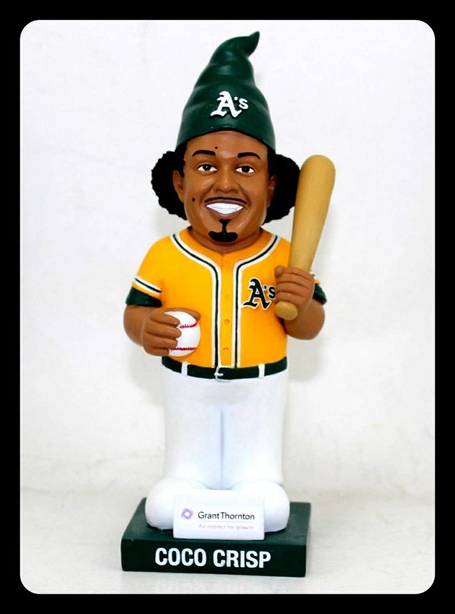 First 20,000 fans get a free stock black guy gnome today! For $5 more some guy on the BART bridge will sell it for you on eBay!

U.S.A. plays Portugal today in the World Cup, and I imagine a lot of your attention will be diverted around 3:00 or so. Feel free to discuss that game here in the game threads as well!

The A's currently sport the best record in Major League Baseball, and are 5.5 6 games ahead of the Blue Jays for best record in the American League. They are currently riding a five-game win streak and looking to cap off the homestand with an emphatic four game sweep over the defending champs. It's a great time to be an A's fan.