Red Sox Series Preview: Q&A with Ben Buchanan of Over The Monster

With the A's and Red Sox squaring off for four games, I asked Ben Buchanan of Over The Monster a few questions about his favorite team. Here's what he had to say!

Share All sharing options for: Red Sox Series Preview: Q&A with Ben Buchanan of Over The Monster

The Oakland Athletics got a little loose in their series opener against the Texas Rangers on Monday, but they settled down and won the next two contests comfortably to secure the series victory against the division rival. They enter their four-game series against the Boston Red Sox with the best record in baseball (44-28) and a 5½-game lead over the second-place Angels in the AL West. Josh Donaldson has shown signs of breaking out of his wretched slump by going 5-for-15 over his last four games with only one strikeout. However, all of those hits have been singles, and we'll all feel a lot better when we see ol' Donnie knock one out of the park.

After all of our complaining that only the Yankees benefit from players being suspended due to the presence of the appeals office in New York, the A's will actually reap the reward this time. Brandon Workman, who has been surprisingly effective this year (2.88 ERA), had his six-game suspension upheld for throwing behind Evan Longoria during an unwritten rules war with the Rays. In his place, the Red Sox will call on Felix Doubront, who has an 8.56 ERA in three career starts against the A's and allowed five runs in three innings in his only appearance at the Coliseum in 2012. He's been both wild and hittable this year and is making this start fresh off of the disabled list (sore shoulder).

Brad "Buck" Mills will make his first start as an Athletic on Friday (pushing Chavez back a day), and the awesomely named Rubby De La Rosa will make his first start against the Athletics on Saturday. Last time Lester faced Oakland, he struck out 15 batters in eight innings on May 3. On the bright side, one guy managed to get a hit; it's not like it was all bad. In the bullpen, Koji Uehara (43 K, 4 BB) is giving Sean Doolittle (48 K, 1 BB) a run for his money for the title of Peripheral Stat Overlord. On the injury front, Shane Victorino is out of the lineup with a hamstring injury and Clay Buchhholz is already working back from his first DL stint of the year (knee). Fortunately, we won't have to see John Lackey, both because I can't stand looking at him and because he's arguably having a career year (saying a lot for a guy who once finished third in the Cy Young voting). And finally, welcome home Jonny Gomes!

1. Boston brought Stephen Drew back into the mix in late May, and he's started at shortstop for the last week. Who went to the bench to make room, and do you think that Drew will perform better than that player? In other words, do you think that bringing him back was a good move? How has he looked in his first week back from a long layoff?

BB: Who Drew replaced is actually kind of complicated. Directly, he replaced Jonathan Herrera. Herrera, however, was playing short in place of Xander Bogaerts, who was playing third in place of Brock Holt, who was moved into the outfield generally replacing Grady Sizemore. Oh, and Will Middlebrooks was injured somewhere in there.

The amazing advancements of Brock Holt

Joon Lee •Over the Monster

The amazing advancements of Brock Holt

See what I mean?

To make a long story short, Will Middlebrooks is the guy who could have expected playing time, but will now have to go out and find it. Really he makes a good platoon with Drew, but that would require the Red Sox to shift Xander Bogaerts back and forth between third and short, which they seem reluctant to do.

As for whether he was worth it, well, that depends on how you view Boston's chances. Drew is certainly an upgrade quality-wise, and has actually shown that in the last few games after getting off to a characteristically slow start. That being said, the Red Sox signed him when they were just a few days removed from a .500 record. They proceeded to lose the next five games -- part of a 10-game losing streak -- and even if they're now back to the exact same record relative to .500, the idea of this Red Sox team contending took a hit that it hasn't really come back from. In that context, it's hard to really measure whether or not re-signing him was worthwhile.

BB: No, he's probably not really this good. Yes, you probably should be afraid of him. At least for now. There's no sustaining a .400 BABIP, but Holt is playing well over his head now and showing no real sign of stopping. Inevitably the league will adjust, Holt's weaknesses will be exploited, and he will fall off. But he's made the most of his opportunity, and between the defensive flexibility he's shown and the legitimately better-than-expected bat (even adjusting for things like BABIP), he's probably earned himself a major league career of some sort. 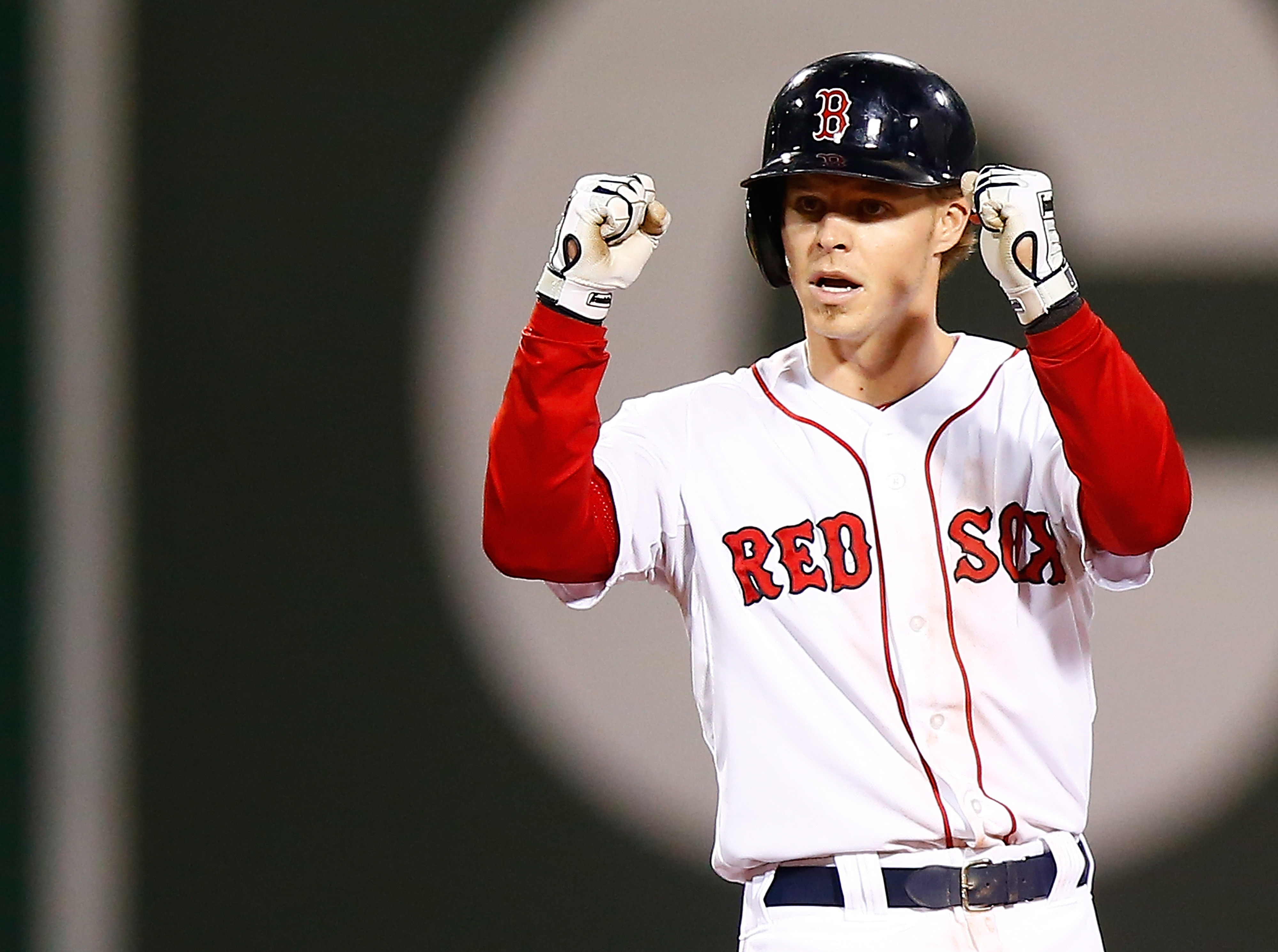 3. Which rookie's skill has been more valuable so far: Xander Bogaerts' bat, or Jackie Bradley's glove in center?

BB: This is a fun question. Xander Bogaerts is obviously the better player this year, but that's not what you asked. Ten days ago, I'd probably have answered Bogaerts' bat, but he's gone a bit cold, and I imagine if Bradley had a league-average bat, he'd be the slightly more valuable player this season.

Of course, he doesn't, and even if he did Bogaerts' bat will very likely leave Bradley's glove in the dust in years to come.

4. Jake Peavy (Thu starter) turned in an average performance last year and has been below-average so far in 2014 (89 ERA+). At age 33, are his days as an above-average starting pitcher behind him, and if so why? Or do you expect to see him bounce back a bit?

Ben Buchanan •Over the Monster

BB: Peavy's last start was maybe the first time he looked like his old self. He started the season "hot," but not in a way where he could really be counted on to continue recording outs, and sure enough, everything went to hell about a month back.

The problem is mainly to do with control, in that he doesn't seem to have any anymore. A quick look at his BB/9 will show a 10-year high 3.40, but it's honestly worse than that. There have basically been two modes to Peavy this season: either he's throwing what are essentially waste pitches that no half-decent batter will swing at, or throwing junk in the zone, leading to his 13 home runs.

If he's going to come around, it's going to have to be tonight, turning his last outing into the start of an upward trend. Honestly, though, it seems more likely that we come to view that as a positive blip on a very negative radar.

5. On Saturday, the A's will get their first look at Rubby De La Rosa (pronounced "ruby"), who was acquired from the Dodgers in the famous Nick Punto Trade. Can you give us a scouting report on De La Rosa?

BB: Rubby is pretty easy to describe right now: insane changeup, inconsistent fastball. If he can locate his fastball well enough to keep hitters honest, he can be downright dominant. But that's a pretty big "if" right now.

6. What has to happen for this fourth-place Red Sox team to climb back into contention? Will they be buyers at the deadline, and if so, what/who would you like them to target?

Is Chris Capuano the next veteran to go?

Is Chris Capuano the next veteran to go?

BB: Well, they're going to have to score runs. The only reason we're talking about the possibility of contention right now rather than who they'll trade away at the deadline is because they managed to turn five runs into three wins against the Twins. The rotation can be good. Lester and Lackey at the top are givens, Brandon Workman seems to be for real, Rubby can get by, and they've still got more Triple-A arms to throw at the problem if necessary.

But if Dustin Pedroia and David Ortiz don't start hitting like they usually do, Shane Victorino doesn't come back healthy and productive, and the Red Sox somehow manage to keep hitting like a Single-A team with runners in scoring position, that's going to go to waste. Particularly given how major a role Brock Holt's hot streak has played in keeping them anywhere near the (rather uninspiring) pack.

Even if the Red Sox are just 4.5 games back of the Wild Card, there are seven teams between them and that playoff spot. And unless guys like Ortiz, Pedroia, and Victorino manage to start producing and get the Red Sox a lot closer over the next month, it's going to be hard to countenance buying at the deadline rather than selling, particularly when the organization still expects this to be a team on the rise in years to come.

7. Can you please write us a haiku about Grady Sizemore, who was designated for assignment on Tuesday in an end to his comeback bid in Boston?

The series starts tonight. First pitch is scheduled for 7:05 p.m., Kazmir vs. Peavy. Peavy's calling cards have been walks and homers, so that's fantastic. His strikeout rate is also at a career low. Also, the A's are really good at scoring runs. Like, the best.