Tony Gwynn and the art of hitting

One of the greatest hitters of all time passed away this week. Let's take a quick look at how he was so successful.

Share All sharing options for: Tony Gwynn and the art of hitting

Baseball lost one of the good ones this week when Tony Gwynn lost his battle with cancer. Gwynn leaves behind a legacy as one of the game's greatest hitters, amassing over 3100 hits with a career batting average of .338 over 2440 games. Gwynn also excelled out of the batter's box by collecting five Gold Glove Awards and swiping 315 bases (the vast majority in the first half of his career). Gwynn is also viewed as nothing short of a consummate professional as well as a kind gentleman. He will surely be missed.

But this post isn't an attempt to try to put his achievements into perspective; rather it is an attempt to explain how he racked so many hits. Gwynn is famously known for his ability to go the other way. He used his refined left-handed stroke to slice balls in the "5.5" hole for countless singles. It is really a shame the data for hitting to all fields wasn't tracked during his time, because I would love to see how many of Gwynn's 2378 singles were to left field. Video pre-2000 is hard to find and often low quality, but I found a couple swings that we can use to get a feel for his approach for hitting.

If you are looking for an example of a simple swing, it is Gwynn. No extra movements. Very repeatable. Really focus on the rotation of the shoulders. As I pointed out in this article, hitters adjust the angle of the bat to hit the other way by limiting the amount of shoulder rotation. Gwynn decelerates his shoulder rotation to allow the bat to cast out and remain open to hit the ball the other way.

Here are a few more stills of Gwynn at contact. 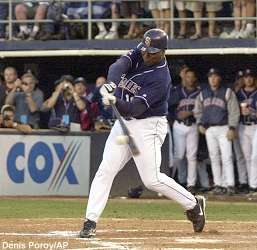 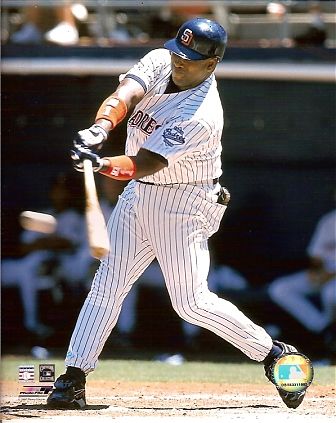 Even Gwynn's statue outside Petco Park illustrates his technique. 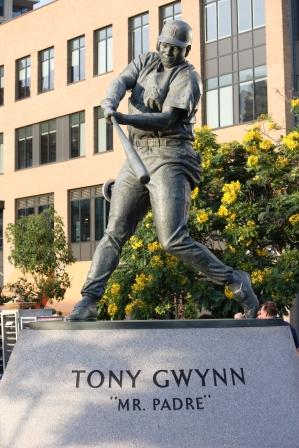 Late in Gwynn's career he had a slight shift in his hitting philosophy. After conversations with Ted Williams (he of pull everything mentality) Gwynn began trying to pull the ball more, especially on pitches on the inner third. In 1997 he posted his arguably best season by hitting .372 with a career high 17 home runs. Gwynn also had a career high in RBIs with 119, after never exceeding 90. A perfect example of his refined approach was this bomb of a home run against the Yankees in the 1998 World Series.

Age and injuries derailed his final three seasons in San Diego. It would have been interesting to see a couple more years of production given the mindset of pulling the inside pitch and going the other way on the outside pitch.

The advanced metrics have taken a little shine off Gwynn's stats- his career wRC+ of 132 ranks 115th all-time (of hitters with 5000 PA). A terrific mark for sure, but probably not 97% of first ballots.  I would have loved to see what could have happened if he had started talking with Ted Williams sooner. In his book The Art of Hitting Gwynn says the 5.5 hole was his bread and butter, but probably should have looked to pull more pitches earlier in his career.

On a pure technical standpoint, I love Gwynn's swing. He is perfect example of how to hit to the opposite field. I would caution hitters in trying to go the other way as much as Gwynn however. If you aren't blessed with his vision and hand-eye coordination, a lot of those balls hit the other way are lazy flyballs.

But Gwynn was blessed with great hand-eye coordination. As well as terrific athleticism. And he honed his craft becoming arguably the best contact hitter ever. That's a recipe for a great ballplayer if there ever was one.

As someone who loves to talk hitting, I had a crazy dream of someday (somehow) talking hitting with Gwynn. Unfortunately that ship sailed. But I did get to listen to him call a few Padres games when I lived in San Diego. One night the viewers got a small look into the mind of a Hall of Fame hitter. San Diego hitter Kevin Kouzmanoff lined a hard hit ball right to the third baseman for an out. The analyst remarked, "Kouz hit it hard, can't ask anything more of him there, right Tony?" To which Gwynn remarked, "He hit it hard, but they've had a man there for 200 years."

Kouz should have gone for the 5.5 hole.