With the A's and Rangers squaring off for three games, I asked Adam J Morris of Lone Star Ball a few questions about his favorite team. Here's what he had to say!

The Oakland Athletics are back on track after a brief rough patch that saw them lose three out of four against the Angels and Yankees while scoring only two total runs in the trio of defeats. The A's came back to take the last two against New York and are once again the best team in the league (42-27). If they win on Monday, they will tie the idle Giants for the best record in MLB. If you've been worried by some sub-par Oakland performances lately, then take a step back and appreciate the bigger picture -- the A's are still in the driver's seat in the American League.

Lewis last faced the A's on July 18, 2012, and pitched well in a losing effort. Darvish gutted through a quality start against the A's on April 21, but then got knocked around by Oakland in his very next outing and suffered through his worst game of the season -- he didn't make it out of the fourth that day, the only time all year that he's failed to complete at least six frames. The last time Tepesch started against Oakland, in June of 2013, he served up six runs and didn't make it out of the fourth. I'm sensing a pattern here. The last time the A's failed to get a quality start was Sat., June 7, against the Orioles. That's seven straight solid outings by Oakland starters. The A's look to repeat the series sweep they served to the Rangers last time these two teams played.

1. Colby Lewis is back in the rotation after missing all of 2013, and he's starting in the opener on Monday. Which number is more representative of his comeback performance so far -- his sky-high 5.74 ERA, or his totally solid 4.14 FIP? In other words, has he been more hittable or unlucky?

AJM: He's been hittable. Lewis's hip surgery resulted in him having a much greater range of motion than he had pre-surgery. While that's great for him physically, it means that his body has changed and it affects how he throws. He had trouble this spring finding the proper release point, and that seems to have carried over to the regular season. His stuff isn't great, which means he needs really good command to get hitters out, and the command simply hasn't been there, as reflected in his elevated BABIP (.394 this season). Bottom line, Colby is throwing too many hittable strikes, and batters are hitting him. Everyone is pulling for Colby, who has been a leader on the pitching staff since returning to the U.S. in 2010, and who was a key part of the two World Series teams. But if he doesn't improve his command, he's not a major league pitcher.

2. Joakim Soria is putting up dominant numbers as the Rangers closer after returning from his second Tommy John surgery -- 1.80 ERA in 25 innings with 34 strikeouts, three walks, and only 13 hits. Has he been able to return to his old self, or has he had to reinvent his game to account for the physical toll his elbow has taken over the years? Does he give hope for future double-TJS guys (like Jarrod Parker) returning to 100 percent?

AJM: Joakim Soria looks like the Joakim Soria of old. He throws multiple pitches for strikes, and when he's on, makes hitters look helpless. If you are looking for a double-TJS success story, you'd be hard pressed to come up with a better one than Soria.

3. What led to Robbie Ross being bumped from the rotation? Was it due to his performance, or was it to make room for someone else? Is there still a chance that he could end up as a starter, or do you think the bullpen is where he belongs?

AJM: Robbie Ross started off the season pitching great, but there were always questions about whether he had the repertoire to stay in the rotation, and after several really rough starts, the decision was made to put him back in the bullpen, even though the Rangers are still thin in the rotation. Since moving back to the bullpen, Ross has continued to struggle with his command and with leaving pitches up in the zone -- he has a .447 BABIP since going back to the pen, and like Colby, that has more to do with poor command than poor luck. I think Ross is probably going to stay in the bullpen going forward, although given how he's struggled this season, I wouldn't be surprised if he ended up working out of the pen in Triple-A in the near future in an effort to get his mojo back.

4. A's fans will get their first look at second baseman Rougned Odor (ROOG-ned oh-DORE) this week. What can we expect to see from him? Is he in the Majors to stay?

AJM: Given that Jurickson Profar, who was supposed to be the starting second baseman this season, is out for the year, and given how Odor has performed, I have to think Odor is in the majors to stay, barring an extreme collapse. Odor is an interesting case, a guy who doesn't have incredible tools, but who has those intangibles that cause scouts to take notice. The phrase you hear a lot with Odor is that he plays with a chip on his shoulder -- he's a grinder, a guy who is going to get the most out of his skill-set, and he also has a strong hit tool. The player I've suggested as a possible comp (if Odor hits a reasonable ceiling) is Michael Young ... solid defensive second baseman who hits .300 every year with some pop, doesn't walk a ton, and earns the respect of those who watch him because of the way he plays the game. 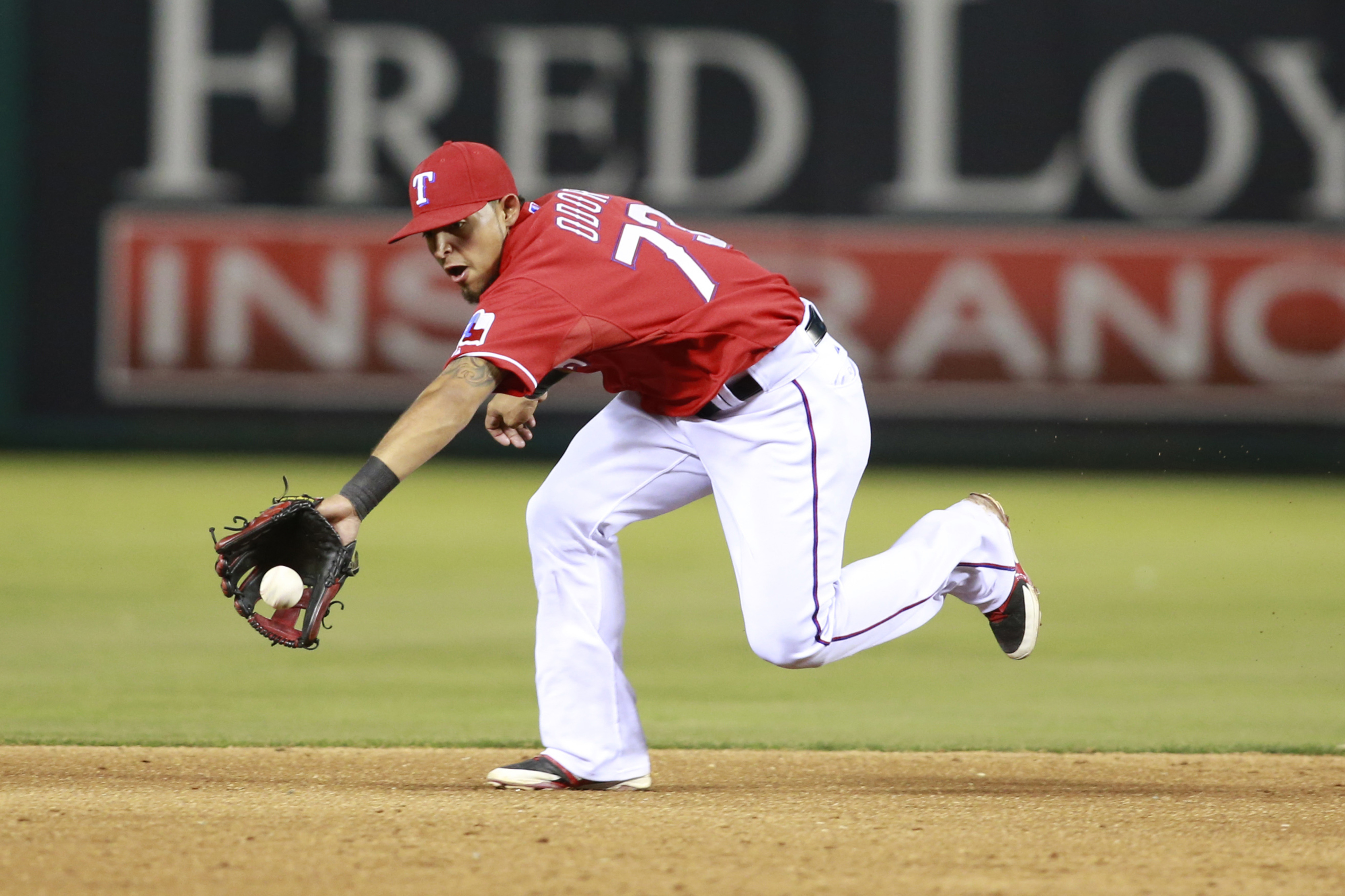 5. How is Michael Choice doing in his first extended trial in the Majors? Are you optimistic that he can develop into a productive big leaguer?

AJM: Michael Choice has been disappointing, to say the least. He won a job on the Opening Day roster with a spectacular spring, but has struggled mightily during the regular season, putting up a .601 OPS while playing sub-par defense in the outfield. The injuries have put the Rangers in a position where they have little choice (ha ha) but to play him every day, and he's shown flashes at times, but overall, he has not met expectations. I still think he can be a productive major leaguer -- I've said I hope he turns into a David Murphy type, a weak starting outfielder/strong platoon or 4th outfielder -- but anything more than an average regular is probably not realistic.

6. With Prince Fielder and Mitch Moreland both out of action, who is covering first base? And how is that backup plan working out?

AJM: The Rangers' first option at first base was Prince Fielder, who is out for the year with a neck injury. Option 2 was Mitch Moreland, who is deciding between surgery that would keep him out for the year, and surgery that might have him back in 3-4 weeks. Option 3 was Kevin Kouzmanoff, who is out until August after undergoing back surgery. Option 4 was Jim Adduci, who was supposed to be activated from the DL a week ago, but re-injured his broken pinkie finger and is now several weeks away. So the Rangers are going with Option 5 right now -- Brad Snyder, a minor league outfielder who was given a couple of starts at the position at Triple-A before being called up to take over the job. If Snyder needs a day off, they are going with Donnie Murphy, a middle infielder who the Cubs released in spring training. That plan is going about as well as you would expect.

7. Can you please write me a haiku about Elvis Andrus and/or Adrian Baltre?

The series starts in about an hour. First pitch is scheduled for 7:05 p.m., Pomeranz vs. Lewis. Former Athletics Donnie Murphy and Michael Choice are both in the lineup for Texas, and the Rangers also have a guy named Daniel Robertson leading off (no, not the same guy as our infield prospect).