Links before a three-game set with the Yankees.

Quintin Berry is now playing with the Norfolk Tides and got ejected last night. It was possibly the weirdest ejection ever.

Mets reliever and Santa Cruz native Carlos Torres punched himself in response to a poor outing during last night's extra-inning loss to the Brewers.

Jen Mac Ramos wrote an extremely deep article on mental health and baseball, with a focus on Justin Duchscherer.

Rachel Toor wrote a longform article on learning to pitch with Bob Welch.

The A's tribute to Derek Jeter will not include that play he made in 2001. I hope they give him something like a scorecard or lineup card commemorating his first game in Oakland and make a charitable contribution in his honor. Susan Slusser has details on what will happen before Sunday's game.

Sam Fuld will return to action with the Twins. 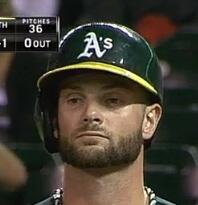 On this day a year ago, Mariano Rivera surrendered a walkoff hit to Nate Freiman as the A's swept the Yankees with an 18-inning victory.

Tonight's starting lineup includes John Jaso at DH, Derek Norris behind the dish and Kyle Blanks at first base.