With the A's and Yankees squaring off for three games, I asked Andrew Mearns a few questions about his favorite team. Here's what he had to say!

It's good to be back home. The Oakland Athletics emerged from a tough nine-game road trip with a 5-4 record after avoiding a sweep at the hands of the Angels on Wednesday, and they finally got a day off after a stretch of 22 games in 23 days in six cities in two countries. Nonetheless, here they are, still tops in the American League in all of the ways that they have been for weeks. They still have the top record (40-26) and trail only the Giants in the NL, they still have the top run differential (plus-130) with no one else within even 70 runs of them, they still score more runs and allow fewer runs than any other team in baseball ... you get the idea. The going's still good.

The A's will see the two pitchers (Kuroda and Nuno) who they beat in New York last week. However, instead of facing Masahiro Tanaka again, they draw David Phelps in the series opener. The A's equivalent of that would be if you replaced Gray with, say, Josh Lindblom. Shawn Kelley is back in the Yankees' bullpen after missing about a month, and Yangervis Solarte's OPS is down to .788 after his hot start. Jacoby Ellsbury is on a 16-game hitting streak; he left Thursday's game with hip tightness, but he is currently expected to be available Friday. This is the third city in the Yankees' current road trip, and that last stop has been a bugaboo for the A's all year; hopefully it will be for the Yankees as well.

1. Brian McCann was a huge offseason acquisition for the Yankees, who were thin at the catcher position last year. However, McCann is off to a terrible start -- .226/.281/.361 and 0.1 bWAR, albeit with seven home runs. What's going wrong with him, and to what extent do you think he'll bounce back? Or is this just the beginning of a sharp early-30's decline by a guy who has logged around 1,100 games and over 9,000 innings behind the plate in his career?

Looking at the 2014 Yankees in "clutch" spots

Looking at the 2014 Yankees in "clutch" spots

AM: McCann's struggles so far have been kind of a mystery. Most people around the game (including us) seemed to think that he was one of the best signings of MLB's off-season. However, as you mentioned, he's just not really hitting at all, and his numbers are even worse than they were during his down year with the Braves in 2012. I think McCann will hit a decline during the contract, but I don't think it's going to come this soon. Although I would love to see him start hitting for real, I need to see more than just a couple bad months to get too concerned about his future.

2. Can you please give us a scouting report on Friday starter David Phelps? Should we be happy or afraid to be facing him?

AM: You should be happy to face him. Phelps has a solid fastball, but other than that, there's not much to write home about, though his curve can occasionally make knees buckle. He's spent time as both a starter and reliever during the last three seasons, and he just doesn't seem to be the same in the rotation. Phelps has pitched to a 4.58 ERA with a .747 OPS against in his 30 career starts. Occasionally, he'll turn in a fine start, but I don't trust him to do that against the A's lineup. 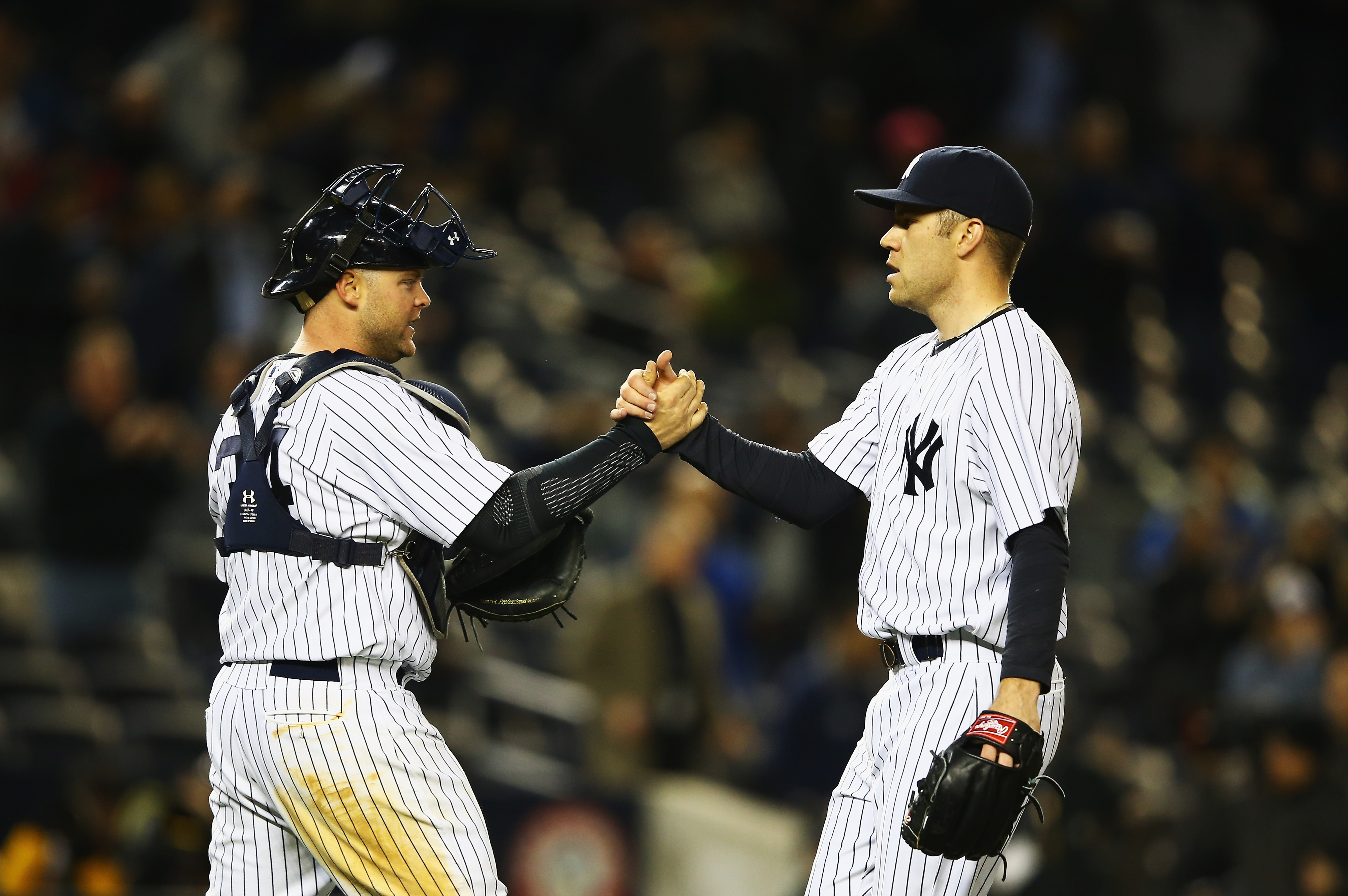 3. After throwing at least 200 innings for seven straight seasons, it looks like C.C. Sabathia will fall short this year due to his lengthy stay on the disabled list. What's wrong with him, and what's his status? Do you expect him to come back and contribute this year?

AM: CC had cartilage breakdown in his right knee, and Dr. Andrews said that his condition is degenerative, so ... that's not promising. He'll be out until at least the All-Star Break, and his exact return is unclear. He's rehabbing it, but given how damning the words "degenerative knee" are, I am not optimistic at all about what CC can do anymore. I don't know if it was also beginning to bother him in his sluggish 2013, but CC has not been the same pitcher since 2012.

4. If you could set aside contracts and general reality and add one current MLB player to this Yankees team right now for free, who would it be and why? (No corresponding moves except the demotion of one player for roster space.)

5. This is Joe Girardi's seventh year as the manager of the Yankees. Now that you've had time to get used to him, what are your opinions of him? Does he have any tendencies that annoy you, or particular strengths that you love?

Yankees asking for too much too soon from Tanaka?

Yankees asking for too much too soon from Tanaka?

AM: Girardi's bullpen management has always been a point in his favor. After being treated to years of Joe Torre burning through the likes of Steve Karsay, Tom Gordon, Scott Proctor, and more, it's been so refreshing to see better bullpen management. Few relievers pitch nearly as many innings as the aforementioned names did under Torre, and the Yankees have had one of the best bullpens in baseball since Girardi took over. Obviously having Mariano Rivera helped, but Girardi seems to be good at coaxing production out of non-elite relievers, too.

That being said, Girardi can sometimes be loyal to a fault. Joba Chamberlain was awful last year and he still kept appearing in relevant games down the stretch. Like many managers, he tends to prefer veterans to younger players, thus leading to annoyances like Brian Roberts still getting the lion's share of the starts at second base even though it's clear he's slowing down. Girardi's lineup decisions, and yes, even his bullpen decisions can be befuddling at times, too. Nonetheless, I think Girardi does a better job than most managers, so I can't complain too much.

6. Can you please write me a haiku (or a limerick) about Derek Jeter?

Jeter had The Flip
Now: Past a diving Jeter
Aging is a bitch.

Thank you, Andrew, for participating in the Q&A!

The series starts tonight. First pitch is scheduled for 7:05 p.m., Gray vs. Phelps. Scott Sizemore is back in Triple-A, which is a bummer because we want to see him succeed but is also good because now he can't follow in the footsteps of Donnie Murphy and Steve Tolleson and Collin Cowgill by coming back to haunt his former team. If you have any suggestions for what the A's should give Jeter as a farewell gift, please tell us in the comments.