Mythbusters: The A's don't show up when the fans do

For a while now, I've repeatedly heard the meme that the A's seem to lose more often than not in front of bigger home crowds. Is that really true or selective memory at work?

Share All sharing options for: Mythbusters: The A's don't show up when the fans do

It's no secret the A's have trouble drawing a large quantity of fans to their home games. However, there are pretty reliable nights that the A's pack the old Coliseum: Opening Night, fireworks, various giveaways, big opponents, etc. On those nights I'm pulling extra hard for an A's win, because I want the fans that bothered coming out to experience the thrill of victory and maybe show up on a Tuesday night. I think the casual fan gets converted into the die hard by coming to the big games, seeing something they like, then coming back again and again. I don't know if that's true but as someone acutely aware of the limited funds at the A's' disposal, I want it to be true.

At some point a meme developed that the A's would lose any time there was a big crowd. I believe this one really took off after the tarps were on. And us humans with our selective memory probably fueled that to some extent. I remember listening to A's talk after losses on fireworks nights and caller after caller would say that the A's didn't know how to get it done when the fans actually showed up.

I felt that the A's have been killing it this year in front of big crowds. Jaso's walk off blast in front of a sellout crowd, the "Cespedes Game" in front of another sellout (Opening Night notwithstanding, but that's a mandatory "L" apparently).  So I wanted to investigate if the meme was ever true by taking a look at the post-tarp era, especially in advance of a big Yankees series. 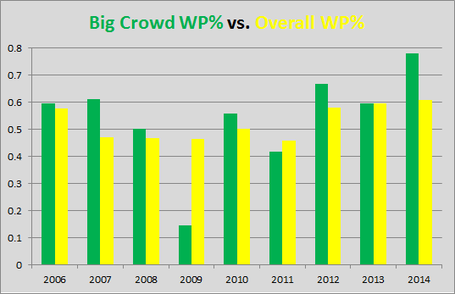 So that green column is pretty much always higher than the gold one. Which means the A's actually do as well or better when the fans pack the house (duh). Should have seemed like an obvious conclusion from the start.

I have no idea where that myth started, but maybe that 1-7 record in front of big crowds in 2009 could've been it. Yeesh, way to keep the fans coming back guys. Thankfully we can dump this meme just like we dumped Bob Geren, and never look back. 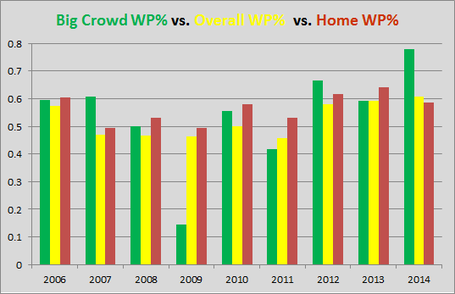 Comparing the results in front of packed houses vs. just home games yields a slightly different result. Basically showing that for the most part it's pretty even. The sample sizes here are pretty small, so one win or loss in front of a big crowd can skew that green column.  But overall it does seem that at the very least, the big crowds don't negatively affect the team, and the myth needs to die. At the least the A's do fine when we show up. And this year so far, it's even better than that.

Moral of the story: Pack the house and cheer the A's to victory!