Share All sharing options for: Game #36: Milone and A's have great eights

The Athletics entered tonight's match-up with a much-needed non-travel day off, and it showed across the board. Tommy Milone tossed eight fantastic innings in his first night home start, the Athletics' bats scored eight runs, and the Athletics' defense kept things tight as they defeated the Washington Nationals eight to nothing. 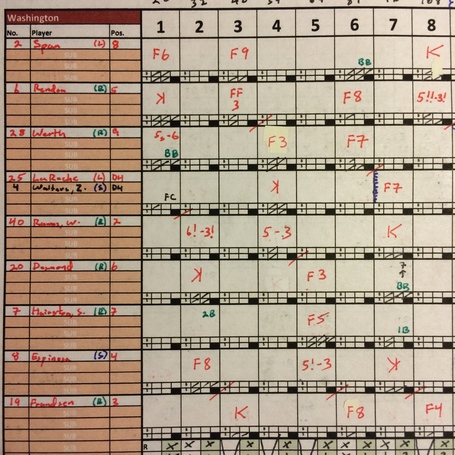 Entering the game, I thought the timing of Pomeranz's promotion to the rotation was the only thing that saved Tommy Milone from demotion to Sacramento instead of Dan Straily. If it was, what a lucky break. Milone tossed eight shutout innings before handing the game over to Fernando Rodriguez.

Milone's first inning was probably the most worrying of them all. It took twenty pitches for Milone to get through his first four batters. After a double to Scott Hairston in the second, Milone retired eleven consecutive batters, and got fifteen outs between the two hits he conceded to Scott Hairston.

Milone also struck out seven batters, getting one from each batter except Rendon, Werth, substitute Zach Walters, and Hairston. The 2010 Washington Nationals Minor League Organizatoinal Pitcher of the Year walked three, facing only five over the minimum.

Fernando Rodriguez, called up as part of the transactions following Dan Straily's demotion and Ryan Cook's placement on the disabled list, pitched the ninth inning. He gave up only a single to Wilson Ramos but otherwise retired the side without incident to complete eighteen consecutive shutout innings for the Athletics. 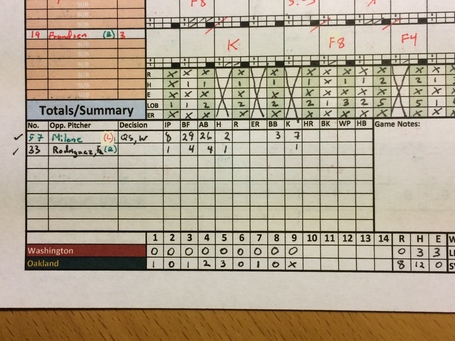 Eight runs for the Oakland bats

The Athletics got the scoring underway quickly with help from Doug Fister. With two out in the first, Josh Donaldson grounded a tapper in front of the plate. Doug Fister elected to field it and made a blind throw to first that completely sailed over Kevin Frandsen's head, with Donaldson ending up at third on a single and an error. Brandon Moss drove Donaldson home on a single, and Cespedes grounded out to ensure the first run counted as unearned.

To lead off the third inning, John Jaso hit his second home run of the year to give the A's a 2-0 lead, and the A's fourth hit of the day.

In the fourth, Doug Fister's day showed signs of completely unraveling. He allowed an initial single against Yoenis Cespedes, followed by a single to Josh Reddick that sent Cespedes to third base. With Derek Norris batting, Fister threw a wild pitch that allowed Cespedes to score and Reddick to move to second. Eric Sogard then singled home Reddick to make it 4-0. Fister escaped further damage by striking out Craig Gentry and John Jaso.

Unfortunately for the Nationals, Fister's sloppiness began to spread to the rest of the team. With one out in the fifth, Josh Donaldson got to second on an E5 when Anthony Rendon threw the ball away. Brandon Moss then connected with a massive home run on a hanging breaking ball to the left of the 400-foot sign in center. Fister got a mound visit after the home run and was allowed to stay in the game. Yoenis Cespedes connected on the next pitch, and Fister was out of here. Seven runs allowed, five earned, and three home runs allowed.

Derek Norris continued his ridiculous performance in recent weeks, with a hit off Fister in the second and an RBI single in the seventh to score Josh Donaldson for the A's eighth run against Norris' former club. On that subject, Norris had to say:

I count seven exclamation marks for Oakland's defensive performance on my scorecard based solely on Ken Korach and Vince Cotroneo's reactions to the play on the field. In the second, Jed Lowrie went deep into the hole and threw across his body to make a one-bounce out on the lumbering Wilson Ramos, with Moss making it a good pick. Both ends got an exclamation point on that one.

In the fifth, Josh Donaldson picks up a defensive mark with a fantastic barehanded play to throw out a bunting Danny Espinosa by a couple of steps.

In the eighth, I awarded three exclamation points on the play that threw out Anthony Rendon, two to Donaldson and one to Brandon Moss. Rendon hit a hard shot to the left of a diving Donaldson who picked it out, made a 360-turn, and threw to Moss. Moss made an excellent pick off of Donaldson's short-hop to the end the eighth inning for what was easily one of Milone's best outings of his career.

Finally, in the ninth, Craig Gentry made a great running catch at the wall that caused Jayson Werth to just stare out to the outfield at the well-hit ball that just wouldn't land for him. Werth went 0-for-3 in the end.

As always, it's important not to get too high or not too low on any winning or losing streak. The A's improve to 21-15, and hold a 2.0 game lead on Texas, with Seattle falling to third place and 2.5 games behind. The A's did not commit an error today, the bullpen got important rest after Wednesday's doubleheader, and the back of the rotation looks that much better. 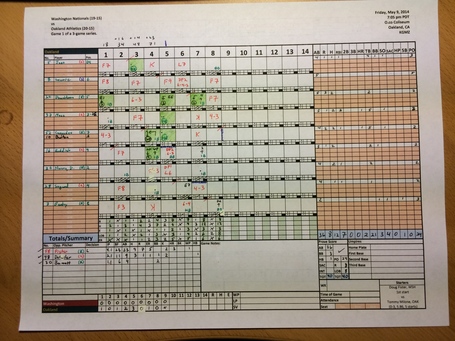 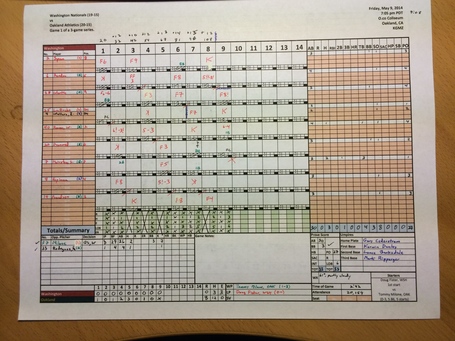