With the A's and Mariners squaring off for four games, I asked Scott Weber of Lookout Landing a few questions about his favorite team. Here's what he had to say!

The Oakland Athletics are humbled but still confident. They got a reality check from the Boston Red Sox last weekend but still escaped with one win to avoid a sweep and salvage a winning road trip. They return home having been truly battle-tested for the first time this season, and now they face ... the Mariners? Seriously? I know we "only" play them 19 times, same as the other AL West teams, but damn if it feels like we match up twice as often. On the bright side, this is the last time we'll see them until July. This week's series will feature four games in three days, thanks to the aftermath of the Great Tarp Boner of 2014. Therefore, it will feature a spot starter for Oakland in the series finale on Wednesday.

The A's have the upper-hand in the first two matchups. Then, on Wednesday, we'll get to see Felix Hernandez, which is a rare treat that almost never happens. I'm really excited to see Felix for only the third time in the last month because it's always fun to mix it up and see new opponents. Oakland has not yet announced who will start in the nightcap, but Nico has some suggestions.

1. Robinson Cano has one home run and a .708 OPS after the first month of the season. Is he showing any signs of heating up?

SW: Most of us aren't concerned about Cano, at least not yet. He's always followed up slow months with hot ones, and he's been such a consistent hitter through his career that nobody seems to be panicked yet. If he puts up another month like April, there will be some mild squirming, but he's still putting together good at-bats.

2. Justin Smoak (108) and Mike Zunino (123) each have OPS+ marks over 100. Which one of them has a better chance of maintaining an above-average OPS for the entire season, and why?

Q & A with Alex Hall of Athletics Nation part 3

Q & A with Alex Hall of Athletics Nation part 3

SW: I think Justin Smoak is more likely to keep an above-average OPS, but his upside is considerably less than Zunino's at this point. The reason Smoak may stay above is his ability to draw walks, and while he hasn't been at the patience levels he has before this season, we generally know exactly what Smoak is at this point, and it's just about what he's doing. Some flashes of power, some walks, a lot of disappointment, and moderately OK offense if you can ignore the position he plays, and then it gets really dicey. Zunino has been a nice development this year. His power is extremely legit, but I have a lot of worries about his contact rates -- Zunino swings at everything and up until this weekend he had yet to draw an unintentional walk. He's striking out a ton, but he's also destroying mistake pitches. It's boom or bust for Zunino, but he seems a lot more susceptible to a second-half collapse if pitchers learn how to exploit him.

3. On the other hand, Dustin Ackley (86) and Brad Miller (57) are each well below average. Which one of them has a better chance of turning it around, and why?

SW: I still believe in both players, but for different degrees. Ackley has shown a lot of positive signs early on this year in terms of his handing of the outside strike, something that has been his downfall in recent years. But his playing time has been a bit scattered, and the power hasn't quite been there. Miller has plenty of power, but he is pressing really hard so far, trying to pull everything and being too aggressive at the plate. I'm still very high on Brad Miller's future, but something in his approach is broken right now. He'll have to figure it out this month, or Nick Franklin just might steal his job back. 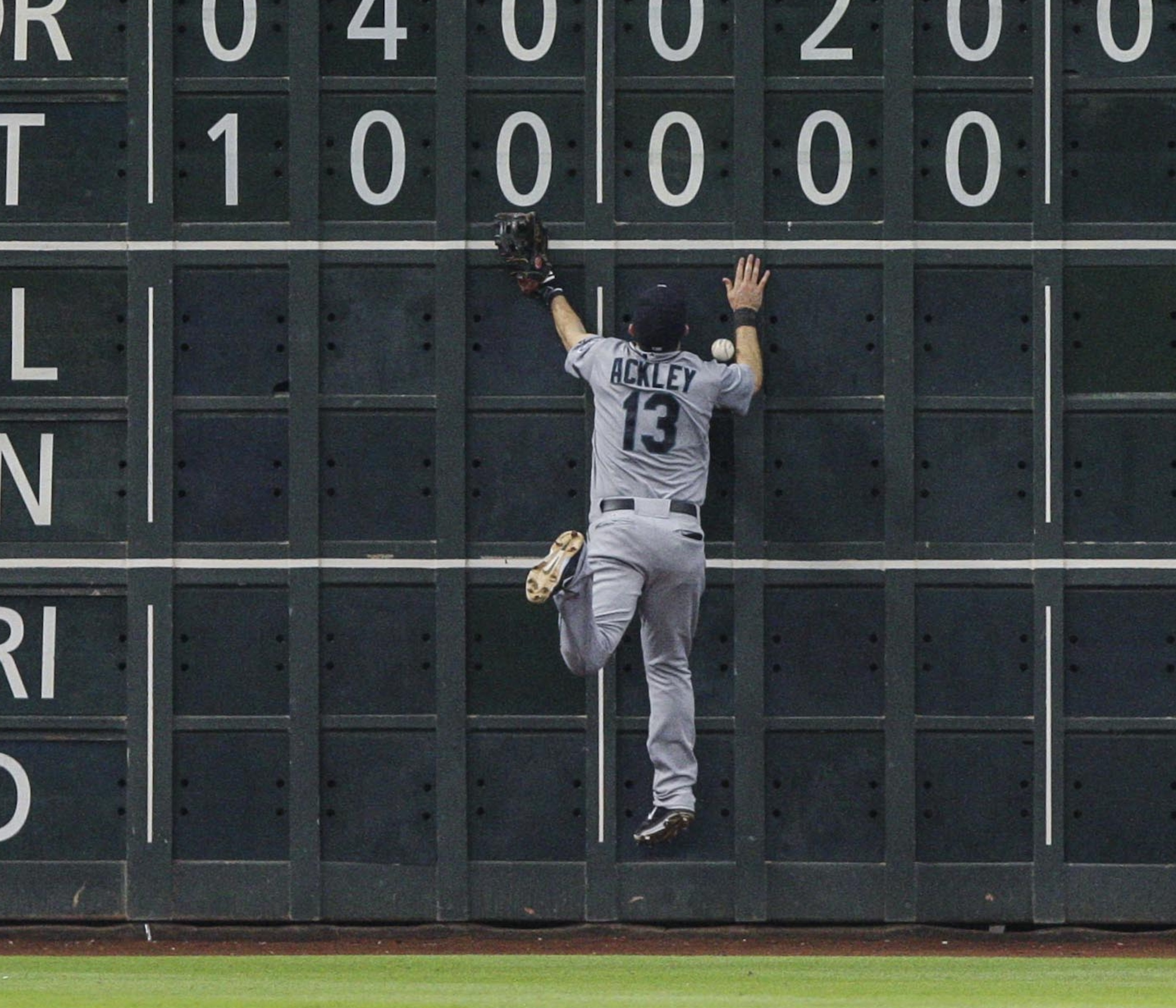 Things aren't going so hot for Dustin Ackley on either side of the ball. -- Photo credit: Troy Taormina-USA TODAY Sports

4. Abraham Almonte was just demoted to Triple-A. What are your thoughts on that move? And what does it mean for Stefen Romero and Michael Saunders?

SW: Abraham Almonte's demotion was well overdue, as he's been completely overmatched for a while now. Almonte was on pace to set the MLB record for most strikeouts in a season -- he sat and watched pitches down the middle and then swung and missed at the same pitches when he attempted to hit them. His plate vision was a disaster, and while he's a tremendously likable, energetic player, he just doesn't seem ready yet. At his age, I don't know if he will ever be. So far, the switch has been the relatively simple one that myself and many others suggested, and that's just sticking Michael Saunders in his role as the everyday center fielder. Saunders isn't a great defender in center, but his bat is an instant upgrade. Romero's role won't change much (and he may be sent down soon himself), but recent call-up James Jones may see some time in center himself to spell Saunders.

5. Roenis Elias, who will start on Tuesday, has thrived after being promoted directly from Double-A. His 3.09 ERA is backed up by a 3.94 FIP (31 strikeouts to 16 walks in 35 innings). Is he for real, or will those walks start to catch up to him as the league makes adjustments to him?

SW: Elias is legit, but to what level he's legit remains to be seen. He's got the stuff to be a Major League starter, and an effective one at that. But he's probably not going to keep up these #2/#3 level numbers until he improves his command a little. His stuff is nasty, especially his breaking pitches to left-handed hitters. At times he hasn't been able to locate, but when he does, the results are tremendous -- 10 strikeouts his last time out. One of the things that contributed to his breakout was fixing his arm angles/release points, so a lot of this is still new to him. The future is up to him, but I'd be surprised if he didn't stick around for a while, barring a blowup. A nice surprise the M's desperately needed after losing Taijuan Walker and James Paxton.

6. Hisashi Iwakuma returned from the DL to make his first start of the season on Saturday. How did he look in his first game back from a strained finger tendon?

SW: Iwakuma looked about as expected, fairly effective against a mediocre lineup, getting into trouble after his pitch count started to get up there. He got some late runs tacked on him that he left on base, but for the most part he looked ready to settle in. He probably won't be quite as good as he was last year, but there aren't any reasons to believe he can't resume his role right behind Felix Hernandez.

7. Erasmo Ramirez has 6.75 ERA after five starts, thanks in part to the fact that he's allowed six home runs in 24 innings. Are you worried about him, given that long balls were his bugaboo last year, or do you think he'll settle down and put up a solid season?

SW: Erasmo's command is gone, and it's why he has been demoted. At this point, unless he starts to dominate Triple-A or there's another injury, he'll be around for spot starts and injury depth mostly, though it's not as if Brandon Maurer is running away with the job. Somewhere inside Erasmo is a filthy, unhittable change, but he simply has not been able to keep it down with any consistency. It's a real bummer, because he displayed stretches of borderline dominance in 2012. Now he's fallen far down the pecking order.

8. How close are young pitchers James Paxton and Taijuan Walker to returning from injury?

SW: It's anybody's guess. Paxton was originally on a 6-8 week timetable, which would have him returning sometime around the end of May or early June, but they're going to be careful with him, especially since a more severe version of the same lat injury kept Stephen Pryor out of action for a year. They're being extra cautious with Walker, who was ready to return before he felt stiff and was scratched again, resetting everything. Understandably, the organization is being super conservative with their rehabs, so they're both in the ambiguous stages of "throwing programs" right now.

SW: Both. Yeah, he's overpaid and yeah, he's really not a good player, but he doesn't play that much and he does hold some value, in theory, as a right-handed hitter. The Mariners are so incredibly lefty-heavy that Bloomquist has gotten some spot starts against righties and while he hasn't done much with the opportunities, the impact is low. Mariner fans love him because he's a local, and statheads hate him because he's OK at everything and good at nothing. He's essentially an old replacement-level player, but you know exactly what you're getting with him. Mostly a punch line that provides a nice chuckle when he clubs a double.