Who is the Oakland Athletics' best oufielder?

Who's the A's best outfielder? I wanted to visualize each of their strengths today, so I created a set of charts and graphs pitting each OF against each other in 5 different category's in 2012-2014. It's A's outfield idol, Athletics Nation style.

Share All sharing options for: Who is the Oakland Athletics' best oufielder?

Who is the Oakland Athletics's best outfielder?

The A's have had one of the better outfields in the game the last few years. In 2012, the A's were 5th in total OF fWAR ( the fangraphs version of wins above replacement) behind the Angels and Cardinals. In 2013, they slipped to #11 behind the Red Sox and Angels. So far in 2014, the A's are #9 behind the (you guessed it) Angels and Rockies. They have been very good but not great.

Unlike most teams known to have a great OF, the A's do not employ a stars and scrubs approach. They employ a mix and match approach. With the addition of Craig Gentry, the A's are projected to be 5th in CF WAR, 6th in RF WAR and 7th in LF WAR in 2014. No one is a big star. No one is a scrub.

Each player has different strengths that work together, and the A's use that approach to gain advantages beyond what will ever show up in WAR totals. Josh Reddick, Brandon Moss, Craig Gentry, Yoenis Cespedes and Coco Crisp all should do certain jobs at certain times. Sometimes that job is to be the DH so I include that in this breakdown.

But who's the A's best outfielder?  I wanted to visualize each of their strengths today, so I created a set of graphs pitting each OF against each other in 5 different category's in 2012-2014. UZR/150, OF vs R, OF vs L, DH vs R and DH vs L.  Of course there will be a poll.

I will mainly be using and combining two stats today. wRC+ and UZR/150.

In there essence, they do the same thing. Count runs created or count runs prevented. If you see that a player has an UZR/150 of ten (10), he saved ten more runs than average over a year. If you see a wRC+ of 110, he created 10 percent more runs (about 10 runs) than average over that year.  These numbers have already been adjusted for league, park and position.

I will also be using a version of wRC+ splits that have been (base running enhanced)* today to help compare A's outfielders offensively.  With speedy players like Josh Reddick, Coco Crisp and Craig Gentry in the Oakland outfield, there was way too much offensive information being missed by using strait wRC+ alone.

*  base running enhanced. More on wRC+BsR at the end of this article.  When you see "wO+B" on the graph , think wRC+.

For now, let see how individual A's outfielders compare to each other with creating runs.  First off in the battle will be Josh Reddick vs Craig Gentry.

The first things we see from the four graphs above is Gentry has been far better vs left-handed pitchers ( LHP). The next thing we see is Gentry and Reddick are roughly equal vs right-handed pitchers (RHP), with Gentry better the last year or so.  Last, Crisp is hands down best vs RHP.

They are interchangeable at DH. Speed or power gets it done.

Pretty equal here as well. Cespedes has a slight edge vs LHP and also RHP (thanks to 2012) at creating runs over Gentry.  Gentry has been better vs RHP lately.

The above graphs are strictly offense. So it shows us who should DH vs what hand. In Moss' case he will be at 1B much of the time, so just go down the line to the next best player.

Ok, now that we have compared all the OF by runs created,  lets see how they do on defense.  This is the last 2.2 years of OF UZR/150 on the left.  I include the individual player vs player UZR/150 graphs at the end.  One of those graphs is included now on the right.

As far as the A's are concerned, a solo home run robbed is equal to a solo home run hit.  To help keep it simple*;  one (1) point of UZR/150 ( one run saved) equals one (1 ) point of wRC+ ( one percent created). (* this isn't saber metrically clean and exact, but me making it more exact will take 2000 more words and only get us 5% closer and still not exact.) 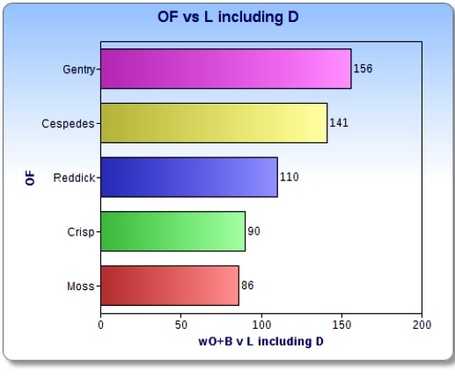 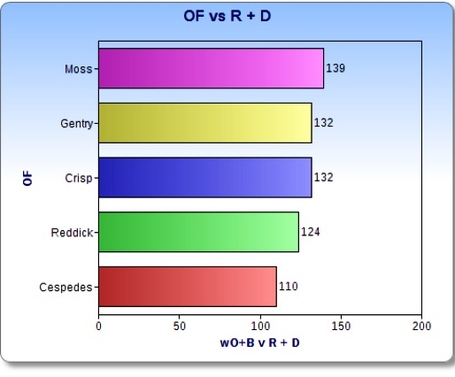 The two charts above show the total offensive and defensive contribution by handiness. This is what all the other charts are feeding into.  These two are the main two of this article. Look it over again. There may be just a few surprises.

I now want to use this to get a general idea of each players total strengths vs each of the other players on this team. In the chart below, Players that are better vs RHP get more points than those who are best vs LHP,  because they will face RHP 60-70% of the time on average. This isn't the most rigorous of point systems, but it ought to ball park it for our purposes. We need to pick our OF idol. 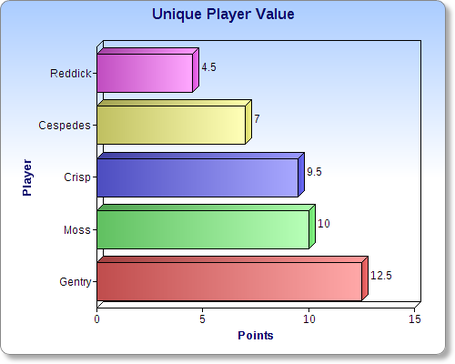 Moss is also surprisingly valuable. A case could be made that with a better 1B, Moss still plays most days in the OF. Move Moss to 1st as usual, and it may become apparent Gentry wins today's OF idol.  It's easier to see it if reversed. There are only three obvious places to not play Gentry.  And they are all at DH.

1. Cespedes should DH vs Gentry L and R

2. Crisp should DH vs Gentry vs R

3. Moss should DH vs Gentry vs R

What do you think Nation, has Gentry done enough? Who is your choice for "the best" ( not just your favorite) OF on the A's?

The two graphs above show Cespedes is who you want up at the critical time.

Above: Slow down Craig!  Craig being a late inning replacement / pinch runner helps him too much here so I never used this chart. However, even taking that into account, Gentry would lead by a large margin.

Assumption: Billy Burns wob modifier will be 10, his UZR/150 will be 10 and he will have around an 90 wRC+ vs both L and R.  This would make Burns most valuable to the A's as an OF vs LHP in place of Crisp/Moss/Reddick. He could also hold his own as an OF vs Cepedes and Reddick vs RHP at times.

*wRC+BsR.  I am calling this Beta version "weighted offense including all base-running"

wO+B (weighted offense including all base-running) or wO+B or "wob" is a modifier equation put together to capture not only the stolen base/caught stealing aspect of a player that wRC+ misses, but also any extra bases (score on a sac fly, 1st to 3rd,...) that a player provides that help create runs.

When wRC+ was first created, it included SB/CS information, but it has since been modified to measure only offense created with the bat. It has never captured other runs created by speed.

Wob is used the exact same way as wRC+ and is based on the exact wRC+ number.  In a speedy players case, the base running enhancement can add up to 10 points of wRC+ to a players original wRC+ number.  A plodder will be penalized.  Moss had a negative (-3) modifier in 2013.

the equation is this:

To find a players BsR and wRC+, go to fangrapsh.com and look on the right side of a players stats. The reason wob is a work in progress is that wRC+ is a rate stat and BsR is a counting stat. It's a bridge. The 500/pa gets us ~90% of the way to accurately capturing this BsR value. The other 10% is the really hard part.