The A's defeated the Red Sox 3 to 2 in ten innings. Sonny Gray tossed another quality start, and the bullpen held up long enough to let the A's bats finish the job.

Hopes were high that the Athletics would be able to salvage a game at Fenway Park with Sonny Gray on the mound for the Green and Gold, and the fresh-faced ace did not disappoint. A win today gave the A's a winning road trip at 6-4 and a happier cross-country flight home ahead of facing the Mariners four times in three days. 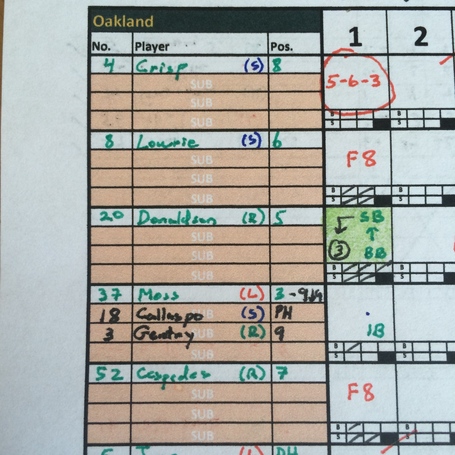 To get the win, the A's had to do some damage to John Lackey. Coco Crisp led off with a grounder on the first pitch which deflected off third baseman Will Middlebrooks to shortstop Xander Boagerts, who threw out Coco on a bang-bang play at first. Bob Melvin elected to ask for replay after the first pitch, a record which will never be broken, but the call stood as inconclusive. After that, Josh Donaldson walked and then stole second base against Red Sox catcher A.J. Pierzynski. Brandon Moss then hit a soft single to center to score Donaldson with 2 outs, and the A's led 1-0 after the top of the 1st.

The Red Sox, in the early going, could not muster anything at all against Sonny Gray. Gray retired the first 6 he faced, and faced the minimum through 4 innings.

Were the reply review rules correctly applied in the third inning? 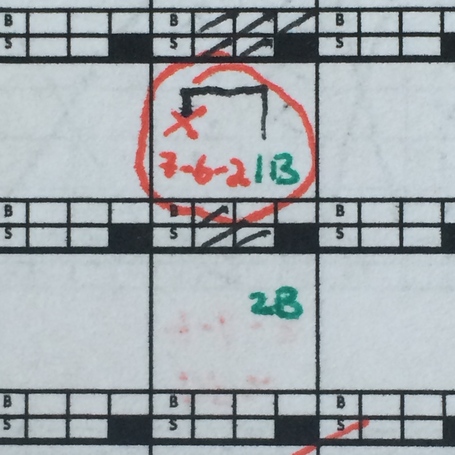 In the third, with Josh Donaldson at first, Brandon Moss hit a soft double into the left field corner. Third base coach Mike Gallego did not make any visual indication to Donaldson on whether to round to third, though Donaldson had a better view of the play than Gags did near the coaching box. Donaldson went and was called out by home plate umpire Mark Ripperger.

However, replays also appear to indicate that Donaldson actually reached the plate before Pierzynski applied the tag. Donaldson told the Chronicle's Susan Slusser that umpire Ripperger was of the opinion that Donaldson's foot did not touch home plate. While Melvin could not directly challenge the tag, the umpire's decision to review the collision rule should have also triggered a review of whether Donaldson was safe or out according to Part I.C. of the umpire review regulations.

[I]f a Crew Chief exercises his discretion to initiate Replay Review of a call involving the application of Official Baseball Rule 7.13, the Replay Official shall review any other reviewable call on the runner at home plate on that play (e.g., whether the runner was forced or tagged out at home plate even if Rule 7.13 was not violated).

The press box announcer did not specify whether the tag play was examined by the review team in New York. 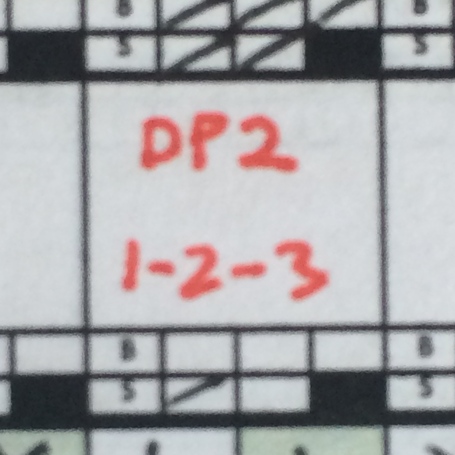 In the fifth inning, Sonny Gray ran into some trouble, allowing Mike Carp to score on a Grady Sizemore double and walking Will Middlebrooks to load the bases. Jackie Bradley Jr. came up with one out and gave Gray a chance to perform yet another Houdini routine. Bradley grounded right back to Gray, who threw to Norris for one and then up to Moss for two, for the 1-2-3 double play. This has happened before:

Gray faced JBJ with the bases loaded and 1 out in college. Got a 1-2-3 double play that time, too. He was thinking about it during AB today. 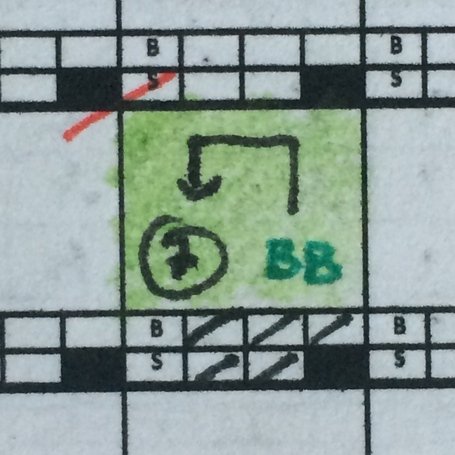 With the score knotted up at 1 after five, John Lackey began pitching the 6th having thrown only 77 pitches. Donaldson worked a walk on 8 pitches, Brandon Moss took 5 pitches to fly out, and then Yoenis Cespedes hit a screaming double off the top of the monster. Donaldson read the play well and this time beat the relay to allow the A's to re-take the lead, 2 to 1, and end Lackey's day after a 30-pitch 6th inning.

For the 7th and 8th, Red Sox manager John Farrell sent out Andrew Miller and Junichi Tazawa for an inning apiece, and each of them struck out 2 and got the other Athletic to fly out to right. 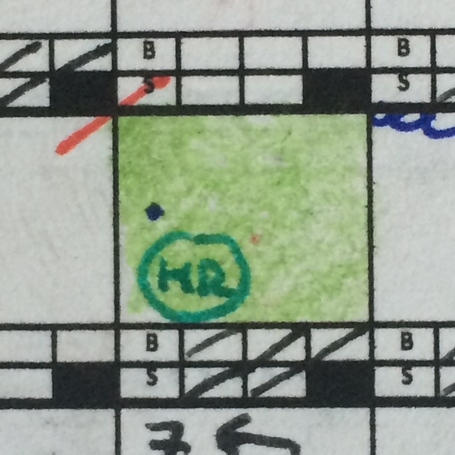 Moving on to the bottom of the 7th, Sonny Gray had thrown 91 pitches and seemed to be cruising along after escaping that jam in the 5th. A.J. Pierzynski had other ideas, hitting a solo homer to deep right center to tie the game at 2. After Gray walked Xander Boagerts on four pitches, his day was done, with Fernando Abad coming in.

Abad was his usual self, but the wind played tricks on the defense behind him initially. Jonny Gomes hit a pinch hit lazy fly ball to right, but Josh Reddick completely misjudged how the whipping winds would swirl the ball around. He initially came in about 40 feet, then ran back 20 feet, and the ball ended up clanging off his glove for a two-base error. Boagerts wound up at third. 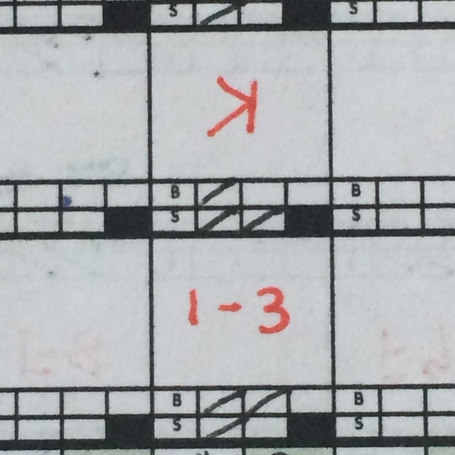 Abad was not going to allow a run to score, however. He struck out Will Middlebrooks a-lookin', and then Jackie Bradley, Jr. grounded another comebacker to Abad. Abad stared down Gomes at third, and threw out Bradley at first. Luke Gregerson relieved Abad to try to get the last out, and he did, getting Dustin Pedroia to ground out to third and limit the damage to just the initial solo home run by Pierzynski. A's 2, Red Sox 2.

In the bottom of the 8th, Mike Carp was the Red Sox's only threat after he hit a two-out single. Jonathan Herrera pinch ran, but, with Sean Doolittle now pitching, Derek Norris threw out Herrera attempting to steal to end the 8th, still tied.

Koji Uehara pitched the top of the 9th having appeared in 2 of the last 3 days, including 16 pitches yesterday. After Cespedes struck out, John Jaso got about on a full-count single, and Derek Norris worked a full-count walk. Josh Reddick could not capitalize, however, and grounded into a 6-4-3 double play. Reddick appeared to perhaps turn his ankle as he swung at the ball and left the game immediately after. Brandon Moss moved to right field and Daric Barton took Reddick's spot in the batting order to play first base. 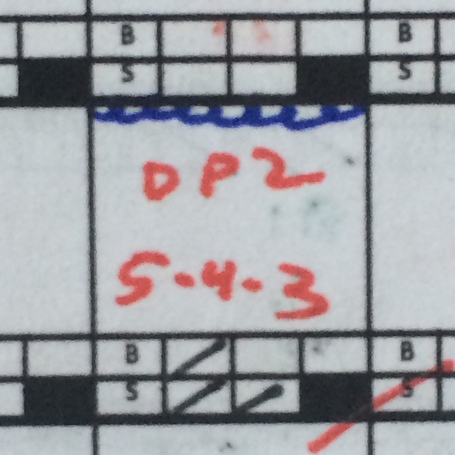 Boston made a few noises in the bottom of the ninth. A.J. Pierzynski attempted to bunt his way aboard but Derek Norris was all over his attempt, getting Pierzynski 2-3. Xander Boagerts singled, and Jim Johnson was called upon to relieve Doolittle. Johnson found that double play magic we've been looking for, getting Jonny Gomes to ground into a 5-4-3 double play to send the game to extra frames. 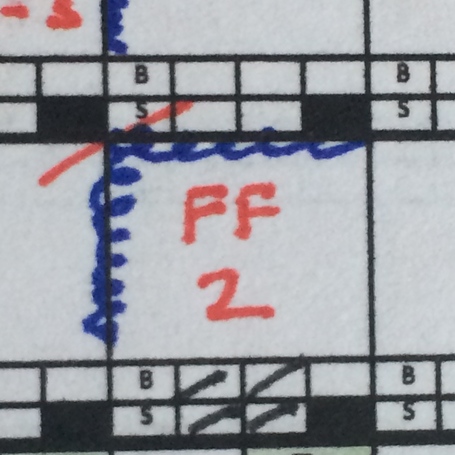 With Sogard, Crisp, and Lowrie due up, John Farrell went to his fifth pitcher of the day, Chris Capuano, for the tenth. Bob Melvin countered by calling upon Nick Punto, even though Alberto Callaspo was on the bench. Perhaps Melvin had more of a belief in Callaspo's "clutch" hitting abilities with runners in scoring position, although Callaspo has grounded into double plays in five of the last ten games. Nick Punto popped out to Pierzynski in foul territory. Coco Crisp then promptly grounded to short. 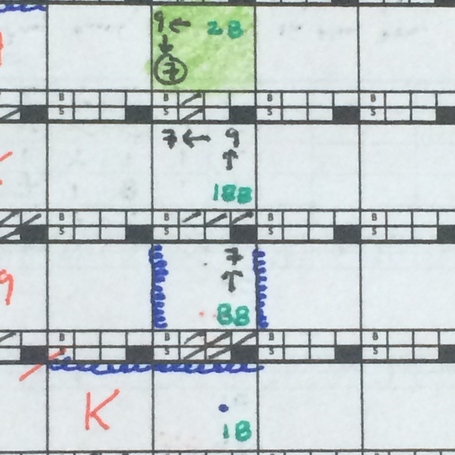 Jed Lowrie kept the inning going with a two-out double. Donaldson was intentionally walked with Moss due up. Only then did Bob Melvin pull out Alberto Callaspo, a surprising move for Melvin with Craig Gentry on the bench, as he usually goes position-for-position. Callaspo worked a walk, and Capuano's day with done with the bases loaded, in favor of Burke Badenhop.

On 0-and-2, Cespedes hit a dribbler down the third base line. Middlebrooks, playing back, charged to the edge of the infield grass to receive the ball and throw to first, but Cespedes beat the throw and Lowrie scored from third. Cespedes also came up a little bit lame on that run down the line and reports are that Cespedes might not be available tomorrow as a result. He did stay in the game however, as John Jaso hit a 400-footer to center field straight into Bradley's glove to end the top of the 10th. 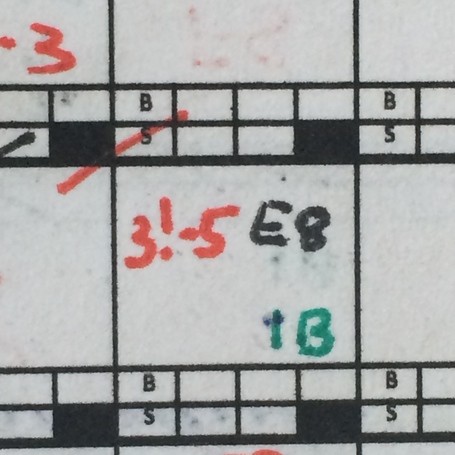 Jim Johnson continued to try to earn the win for himself in the bottom of the tenth, with Craig Gentry entering the game for Callaspo and playing right field. On the first pitch he gave up a single to center that Coco Crisp was not able to play cleanly, and Middlebrooks ended up at second on his error, the Athletics' second of the game. Jackie Bradley Jr. did his best to move Middlebrooks over to third by grounding to Daric Barton, who was playing in on the grass anticipating a possible sacrifice bunt attempt. Barton took the ball well to his right and then threw to Donaldson at third who tagged out Middlebrooks.

With the double play in order, Johnson threw a 2-0 two-seam fastball for Dustin Pedroia to ground into a 6-4-3 double play to end the game, the A's winning 3 to 2.

The A's return from a 6-4 road trip with a 19-12 mark, likely 2 games better than the Texas Rangers once they wrap up their game against the Angels. The Detroit Tigers have a half-game better record than the A's in the American League, though they've played 5 fewer games.

Tomorrow's game starting off the four-game set against the Mariners is at 7:05 pm Pacific Time. Scott Kazmir faces Chris R. Young. The Mariners are only 4 games back at 14-15. 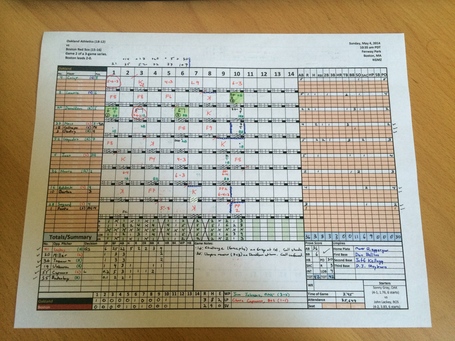 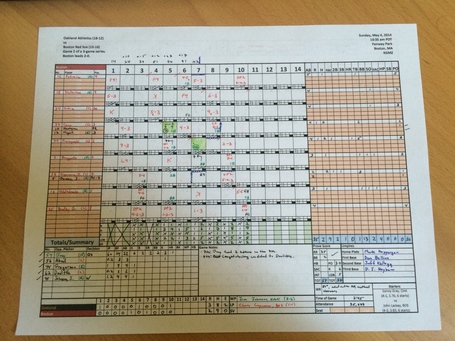