Tonight's game had the quality of one you remember for many years after it happens. After a shaky start down 3-0 after four and 3-1 as late as the seventh inning, the Oakland Athletics scored eleven unanswered runs to blow the Angels into shell-shocked awe and win 11-3. Everybody contributed, but really, tonight was all about one guy.

If you say "The Cespedes Game" a year or three from now, you'll think of tonight. That was a special performance. 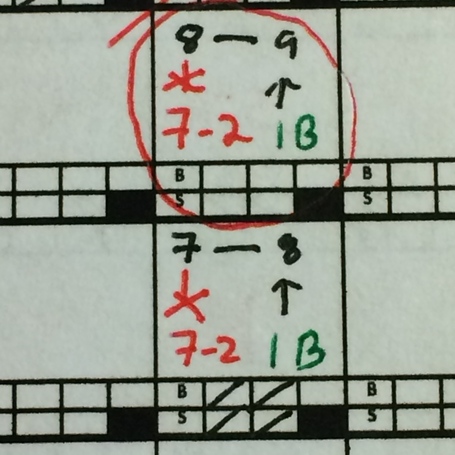 Let's jump ahead to the second inning. Tommy Milone had already allowed four hits and an error and now had runners at first and second with nobody out in the top of the second inning. Collin Cowgill grounded a hard-hit ball to the left past a diving Josh Donaldson to Yoenis Cespedes. The slow-moving catcher Chris Ianetta rounded third as Cespedes threw a cannon right to Derek Norris waiting along the baseline to get Ianetta at the plate, keeping the game scoreless with runners at first and second. One run saved.

Yoenis Cespedes is the first #Athletics outfielder with two assists in an inning since Matt Stairs on April 16, 1996.

Tyler Skaggs was performing extremely well through three innings, giving up only two walks. With Josh Donaldson aboard in the fourth, Cespedes began his offensive onslaught with a double to open the hitting, moving J.D. to third. Derek Norris skied a fly ball to short left field, but Donaldson legged out a run to beat Grant Green's throw by an eyelash. Credit Cespedes with part of a third run.

In the seventh, with the game now tied at 3-3, Cespedes tripled with two on and two out against reliever Joe Smith, scoring both runs to put the A's ahead 5-3. He scored on Alberto Callaspo's double. Credit Cespedes as playing part in three more runs now, for six.

In the eighth, Cespedes came in to face Jarrett Grube making his Major League debut. Cespedes gave him a special Oakland Athletics welcome with a three-run home run to cap off an absolutely bonkers night. Playing some part in at least nine runs created or prevented, Cespedes completely owned the Angels.

Somehow, in the post-game interview with the Oakland Athletics Radio Network's Vince Cotroneo, Cespedes said through interpreter Ariel Prieto that he knew he has five RBIs, but he's had another one, so he didn't think it was his best game. I can't think of anything better than the way he performed tonight: a double, a triple, and a home run. He'll need the cycle to have a better day.

Tommy Milone was not looking great in the early going, or much of the any going really. In the first he loaded them up with some help from an error by Josh Donaldson. Looking eerily similar to last night's A's first inning, the Athletics benefitted from Angels manager Mike Scioscia's lineup construction, batting he of the .552 OPS David Freese fourth. Freese struck out, Howie Kendrick flew out to Nick Punto on the infield fly rule, and C.J. Cron grounded out to Jed Lowrie to escape the inning.

The second inning, of course, included the two 7-2 plays at the plate. Through two innings, Milone had given up six hits and a different runner reached on an error, and no runs scored. Milone then managed a one-two-three third before giving up a three-run home run to Collin Cowgill in the fourth, the only runs for the Angels tonight.

The heading exaggerates a bit, as Milone managed to get one-two-three fifth and sixth innings. The sixth inning was not the most straightforward for Milone. He took advantage of every aspect of his vampireness when two hard-hit balls died at the walls in center and right.

Milone gave way to an inning each from the bullpen's Fernando Rodriguez, Luke Gregerson, and Fernando Abad to bring the game home, Athletics 11, Angels 3. Rodriguez picked up the win and goes to 1-0. 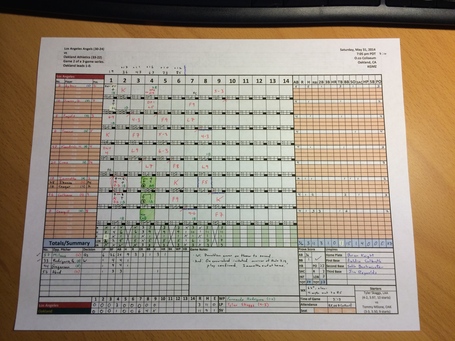 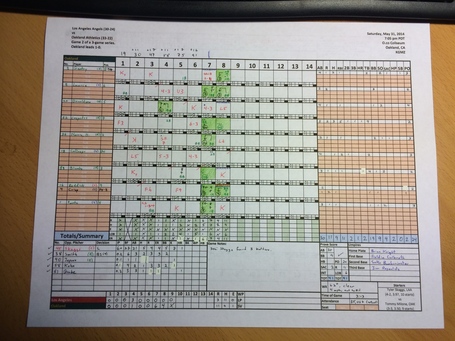