The Oakland Athletics survived their biggest test of the season so far by splitting four games with the Detroit Tigers. In the series, they smoked Drew Smyly, beat Max Scherzer (though they lost the game), and broke closer Joe Nathan for a blown save and a loss. If you're looking for evidence that your team can hang with the top clubs and be competitive, well, there it was. Still, though, they just went 2-5 overall against the other two AL division leaders (Detroit and Toronto), and now they get to host the next-best team in the league when the Angels come to town today. Yes, that means the A's will have played back-to-back-to-back series against the other three best teams in the league.

The A's faced Richards and Skaggs when these two teams met in April and had success against both. They scored five runs off of Richards in seven innings, and collected four runs off of 10 baserunners in six innings against Skaggs. Both pitchers are having fine seasons, but it's encouraging that we've seen the A's knock each of them around. Meanwhile, Pomeranz finally gave up his first runs of the season as a starter in his last outing against Toronto, after debuting with three straight scoreless starts; his only other loss of the season came in relief in extra innings against these Angels. Milone is on fire, having posted a 1.03 ERA in his last four starts; for the season, he now has a 3.50 ERA (107 ERA+) and his strikeout-to-walk ratio has reached 2.00 (36-to-18). And just in case those two games aren't awesome, we get ace vs. ace, Gray vs. Weaver, in the finale.

1. What's the latest on Josh Hamilton's injury status? When do you expect him to return to the lineup?

JG: It sounds like the bone bruise he suffered last week has healed and he's heading back out on his rehab assignment this weekend. The word is the club hopes to have him back in the lineup by the end of next week. Of course, that is unless he stubs his toe or something drastic like that.

2. David Freese has been a train wreck at third base, with a .550 OPS and a negative WAR value. He's healthy and back in the lineup, but how long will he stay there before a switch has to be made? Could Grant Green land at the hot corner eventually, or is he getting comfortable in left field?

Meet the Enemy 2: The unknown A's

Meet the Enemy 2: The unknown A's

JG: I know what you mean about David Freese, but he's not going anywhere. One of the major differences between the Angels and A's is that the Angels value a "veteran presence" over actual ability/performance. Anaheim is where great good players go to die. But actually, Freese hasn't been that bad ... lately. He's hit .237 over the last two weeks, compared to his .213 overall average -- that's an improvement, right?  In our last question exchange, I mentioned I really like Grant Green, and that hasn't changed. However, it looks like the Halos are going to use him as a super-sub type player, at least until Josh Hamilton comes back, and then it's back to the minors while Freese continues to tear it up in the majors.

3. Athletics fans are very proud of their high-octane catching duo, but Chris Ianetta (.845 OPS, 139 OPS+) and Hank Conger (.820 OPS, 131 OPS+) have been nearly as good. Will they continue to be above-average contributors all year? And how are they on the defensive side of things, from game-calling to pitch-blocking to throwing out runners?

JG: Yeah, that's been a pleasant surprise for the club, and one that has a chance to continue. Chris Iannetta has always had a good eye and can draw a walk (.356 career OBP), and he's had a few big-time at-bats so far this season. (Editor's note: One example is the walk-off home run against Pomeranz in April.) Hank Conger has slowly developed into a good major league catcher. I wrote "slowly" mainly because it seemed like Mike Scioscia didn't trust Conger behind the plate even after having three great seasons at Triple-A. But then, Scioscia's the guy who gave all those at-bats to Jeff Mathis while Mike Napoli sat on the bench. The duo's defensive ability isn't anything special, both are adequate at throwing out base-runners (Iannetta - 24%, Conger 22%), and if you believe in catcher's ERA, Iannetta is at 3.56, while Conger sits at 3.53.

4. Albert Pujols finally has his power back, with 14 homers and an isolated slugging over .250, but his batting average and OBP have not yet caught up. Are the Angels basically paying $20M+ for Brandon Moss with fewer strikeouts? Or do you still believe Pujols is a superstar who can approach his past heights of glory?

JG: I think most Angels' fans have given up hope of seeing an MVP-type season from Pujols, and now we'd just settle for a .280 / 30HR / 100 RBI season out of him. Yeah, I know ... two out of three of those stats don't really tell much of the story, but triple-crown stats sell tickets and that's why the Angels signed him. Plus, if you believe in team chemistry, you'll often see Pujols sitting next to Mike Trout during the game, hopefully letting him soak up some of those MVP juices (I know, that sounds gross). Is he worth all of that money? No. Am I glad he's on the Angels? Absolutely! At least for now. 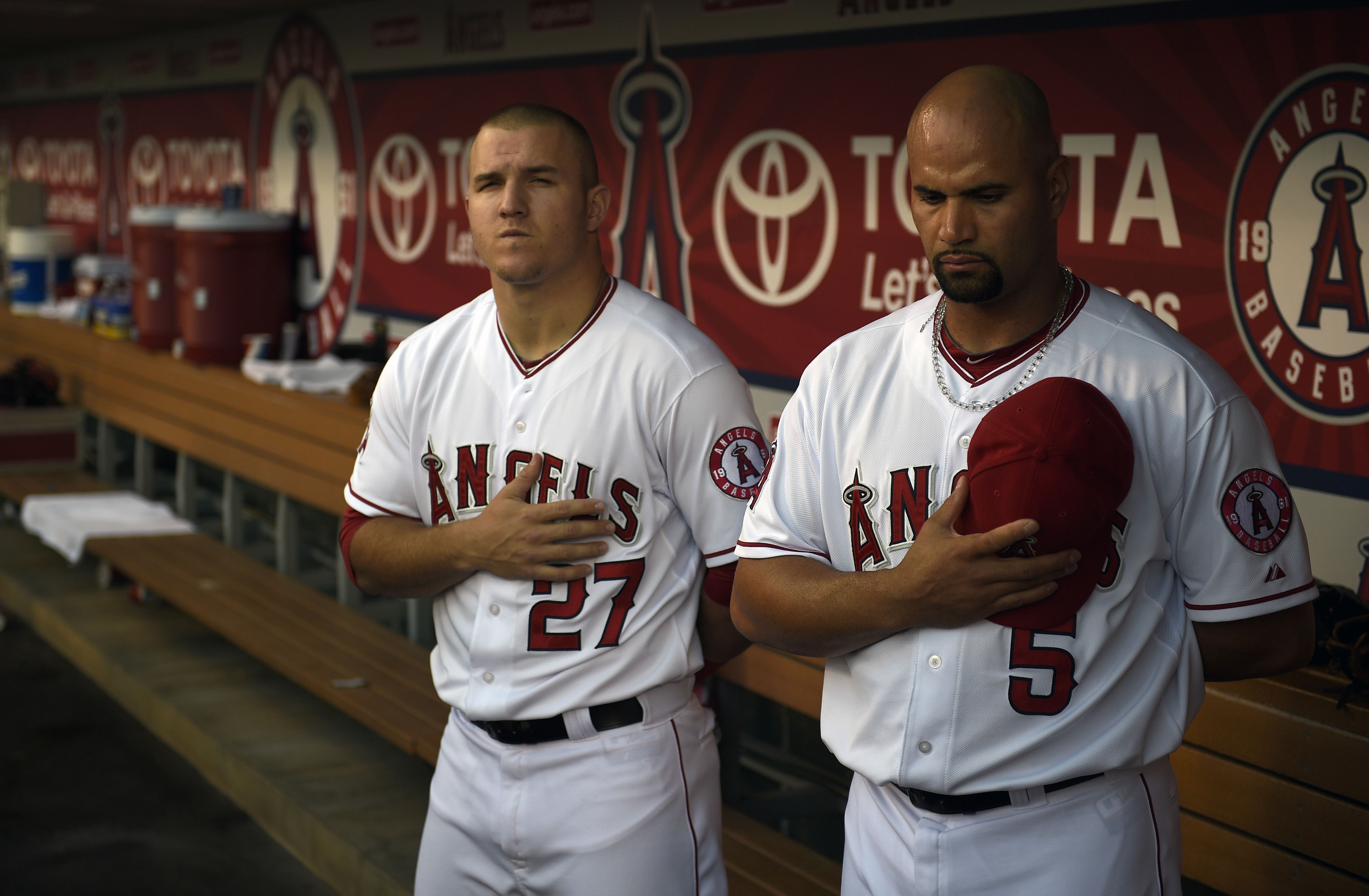 5. Who is Matt Shoemaker, and should I be happy or sad that the A's won't be facing him this weekend?

JG: You should probably be sad take the A's will miss Shoemaker's turn, I have a feeling the Oakland squad would tee off on the Angels' newest rotation addition. I'm not really sure how he's getting major league hitters out, as his Triple-A performance didn't indicate anything special (a 5.38 ERA in 69 starts), but he's the guy right now since the Angels don't have any depth at SP. It looked like the team was going to start Wade LeBlanc Thursday night, but fortunately they were able to bring Shoemaker back up when Burnett went down, again. Yeah, that Wade LeBlanc.

6. However, we will see lefty Tyler Skaggs once again. The 22-year-old was decent at best in his first outing against the A's, but he's been solid overall with a 3.97 ERA (97 ERA+) and a 2.94 strikeout-to-walk ratio. What are your first impressions of Skaggs, both in terms of present production and future development?

JG: What I like about Skaggs is how his maturity and poise have improved over the course of this season. He's got the skills, but it seemed like early in the season he'd get rattled and that would be the end of his good start. Recently, he's been able to maintain his focus when things get a little dicey and get out of the jam he's found himself in. You've got to remember, Skaggs is just 22 years old; maturity and poise at that age are uncommon.

The Legend of The Dipoto Four

7. In our last Q&A, we discussed my hunch that Garrett Richards was a breakout candidate as well as Jered Weaver's declining velocity. Well, Richards is indeed breaking out (3.00 ERA, 2.58 K:BB) and Weaver has been his vintage self (2.99 ERA) despite an average fastball speed of 85.6 mph (for context, Tommy Milone is at 86.4). What do you have to say about these two pitchers?

JG: I'm not completely sold on Richards just yet. I'm a little concerned that his line-drive percentage has increased a bit, while his groundball rate has declined, but he's been able to keep the ball in the park so far this season. Just off the top of my head, it seems like he's getting more pop-ups, so maybe that's why we're seeing improvement ... those home runs are becoming infield flies.

Weaver is his old self -- intense. From what I've heard, he went through a pretty vigorous offseason training program and does more free-weight training in-season. Seems this helps his stamina more than velocity, but velocity was never his game. I'd say we might see a little regression from Richards, but Weaver will continue to have a great season.

8. If you could set aside contracts and general reality and add one player to this Angels team right now for free, who would it be and why? (No corresponding moves except the demotion of one player for roster space)

JG: Geez, this is a tough one. I'd probably go with Clayton Kershaw. The Angels have three-and-a-half good starters, but if they get into the post season, a lefty-righty-lefty rotation of Kershaw-Weaver-Wilson would be pretty formidable.

9. Can you please write me a haiku about your love for Mike Trout?

If all works out well
Trout will win us some flags, and
A plaque in the Hall

The series starts this evening. First pitch is scheduled for 7:05 p.m., Pomeranz vs. Richards. The A's are fielding their top lineup, with one tweak -- Alberto Callaspo is starting at second base. No word on if this is just rest for Eric Sogard, or if his wobbly bat has finally earned him a seat on the bench.