Share All sharing options for: Take a moment to appreciate Josh Donaldson

This Wednesday I was doing what I do most nights: watch the last few innings of the A’s game after my kids (finally) go to sleep. I had stayed tuned to what was happening in the game through radio or following the box score on my tablet. Basically a pitcher duel between Scott Kazmir and Anibal Sanchez. Things settled down in the Brewer household just about in time for the bottom of the ninth with the A’s trailing 1-0.

After Callaspo battled to finally ground out, Crisp got the inning going with a double to the left-field corner. That was it for Sanchez, in came closer Joe Nathan. John Jaso singled to left to put runners on 1st and 3rd, and in stepped Josh Donaldson.

Now, as you are probably aware by now, I am a fan of Donaldson. As a part-time hitting instructor, I like to use MLB hitters as example for guys I hit with. Until last year, all my examples were not Oakland Athletics. In 2012 Donaldson was close, but in 2013 is really when he started swinging the bat well. I use elements of his swing with nearly every hitter I hit with. Plus Donaldson was nice enough to talk hitting over Twitter with me a couple times. So I was definitely excited to see Donaldson come up at that moment.

Donaldson digs in, does his usual prep (reaches to the sky, deep breath), then looks out at Joe Nathan. Nathan is off to a slow start this year, but this guy has earned a solid reputation as a closer. Nearly 10 strike-outs per nine innings, about .85 HR per nine innings, ERA of 2.81, and 354 saves. So what does the look Donaldson gives Nathan tell him: "I OWN YOU. THROW ME THAT CRAPPY SLIDER FIRST PITCH. IT MAY WORK AGAINST EVERYONE ELSE, BUT I AM THE BEST PLAYER ON THE FIELD. THROW IT AND I AM WALKING YOU OFF."

Of course, Nathan did throw a slider (a slider that is 65 runs above average by the way) and Donaldson did walk him off. Donaldson carefully let his bat fall to the ground and rounded the bases blowing bubbles. The look on his face said "What? This is what I do." All I could think while he crossed home plate and was mobbed by his teammates was a simple thought: this guy is good. 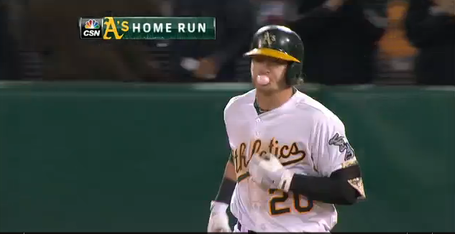 How good? I am not going to bore you with WAR and wRC+ and DRS and all that. I assume if you are reading this you know Donaldson has amassed some (dare-I-say) MVP worthy statistics. What is really interesting about Donaldson is that he is the misfit on the Oakland A’s. On a team of players who didn’t fit in anywhere else, Donaldson kinda doesn’t belong. He is the shiny new bicycle on the island of misfit toys.

Why? First, Donaldson is a complete baseball player. While the vast majority of the team has flaws limiting their roles somewhat (ex. can’t hit righties, only in for defense, walks, etc.) Donaldson has none. L/R splits? Hardly, unless you consider 148 wRC+ against RHP a split. Defense? Gold glove caliber. Could probably play multiple positions if needed (probably at the same time). Pull hitter only? Sprays the ball everywhere.

Second, Donaldson is a tremendous athlete. Part of the whole Moneyball frenzy was the A’s targeted baseball players over athletes, the whole "we aren’t selling jeans here." I think the Athletics have reversed course on this somewhat, and I am not saying the current Athletics are more suited for professional bowling, but Donaldson clearly stands out (yes Cespedes too). Much has been made of his transition from behind the plate to third base, but what doesn’t get any attention is he transitioned to catcher in college. After only catching in college, he was still able to get drafted in the 1st round as a catching prospect. And his swing change. Not everyone can swing like that. It takes a ton of coordination. Donaldson was also an All-State football player his senior year in high school. Special athlete.

Third, he was developed by the Oakland Athletics. I have been hard on the organization for its lack of development on position player prospects. But Donaldson was acquired from the Cubs and been in the organization since A+ in Stockton. They were smart enough to eventually bring him out from behind the plate. And smart enough to stand by when he went through a swing change. In an organization of whiffs when it comes to developing position players, Donaldson is a home run.

Of course, the one thing about Donaldson that is very Oakland is his value. Ridiculously, Donaldson is making league minimum. He is by literal definition of the words the Most Valuable Player in the league.

What am I getting at? Oh, basically just enjoy this. In a time where it is easy to get caught up in the winning or whether to boo someone or whether this guy can hit lefties or this guy can live up to his potential or if this guy’s defense justifies his spot in the lineup, just sit back and watch this guy play. Enjoy it. Josh Donaldson is a ballplayer.