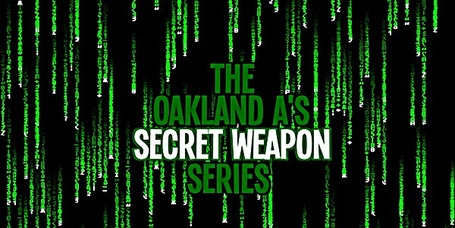 I would like to introduce Athletics Nation to a new series I'm going to try. I was looking back at some of my old articles that I have written over the last five years, and I noticed many of them would fall into this category.

This is really my favorite type of article to write but sometimes it could be months or years between real or rumored revelations. As such, I will also sometimes try and point out some obscure strategy I think baseball teams, and of course the A's in particular "should" try and use. In other words, what can teams and the A's in particular be doing today that will improve them 5 years from now?

In these types of articles, I often wildly speculate and love to proverbially "call my shot" as an author. I get a few right and I get a lot wrong.  I'm o.k. with that.  You make zero percent of all the shots you don't take. As I said, I have been writing these for years now but since I have only been a front page writer for a few months I will provide a few links to some of the articles I wrote over the last five years that could be put into this "secret weapon" or "hidden advantage" category.

However, what you all really came here for today was for new original content. As such, sometime this week, I am going to post on Athletics Nation an exclusive interview. This is a scientist that I believe will absolutely change the game of baseball.

In the meantime, here is an introduction to the types of articles you will be (hopefully) seeing more of in the future. These are one part inspiration and many parts speculation so you ( and I ) will never know when one of these will pop up and which ones may be proved right, wrong or somewhere in between. Please give some (six) of my "older" article's below a skim over and then join me later this week for the AN interview.

One market the A's have neglected is picking up players from Japan that could make an impact.

Spending money on International FA's seems to be Billy's next under-served part of the market to try and take advantage of.

I had my plenty of speculative misses in this article but the A's reportedly did end up offering International free agent (IFA)  Aroldis Chapman the second most amount of money. They just missed out and the Reds signed him to a 6 year/$30 million dollars on Jan 12, 2010.

On October 4, 2010, the Golden Eagles granted permission for Ishashi Iwakuma to pursue a career in Major League Baseball via the posting system. The Oakland Athletics won the bidding. However, Iwakuma and the Athletics could not come to terms on a contract in the thirty-day negotiating period.

But the A's didn't give up. After interest from numerous Major League teams, Yoenis Cespedes agreed to a 4-year, $36 million contract with the Oakland Athletics on February 13, 2012.

To their credit, the Giants have three legit young stars right now, the A's not so much. Stars can win things. Like games, series, and playoffs. The Giants have as good a shot as anyone with Cain and Lincecum pitching. Although I do not wish to see them break their curse and win a W.S, I wouldn't.....

Rookies. The Athletics have had it's share of good ones in the past. Jose Canseco, Mark Mcgwire, Walt Weiss, Ben Grieve, Bobby Crosby, and Andrew Bailey have all won the A.L. Rookie of the year....

It turns out, they were good enough to shockingly propel the A's to a A.L. West title. Unfortunately for the A's and the rest of the A.L. West, I was one of the early writers to openly "call" Mike Trout as the MVP favorite in early July of 2012.

Andrew Koo may have just exposed what the Oakland A's have been up to the last few years. Hidden platoons.

Wild West Poker and Baseball General Managers. Was it a mistake for the Oakland Athletics to allow access to Michael Lewis for the book "Moneyball"?

This also has a free link to the prior Andrew Koo article.

FAN POST: How the A's Secret Weapon Will Win The West. by OmahaHi, Athletics Nation Mar 31 2014

The Athletics are the MLB poster child for effectively leveraging obscure numbers into wins. But what you may not know is one particular platoon advantage may be leveraged by the Athletics like never before in 2014.

This is still way to early to know if anything I speculate on here is right or wrong.

I'm going to go on record as saying the American League West title is not even going to be close. That the A's will win the west by at least 5 games over the Angels rain or shine. That the Rangers injury bug means Texas will start slow and be stuck at least 5 back at the end of 2014 and maybe never make it close at any point with the A's. The teams in the West may be incapable of putting up any real fight at all.

Time will tell whether that prediction will come true and why, but first quarter results are certainly promising.

Well that's it on my past articles. Hopefully there was something interesting there for you and hopefully I will sporadically ( and successfully) add to these in the future.

Later on this week, I will publish an interview.  It will explain in detail, a recent ground breaking and peer reviewed scientific study. I was fascinated by this scientists work and I hope you; and the A's, will be too. Call this one a teaser.