J.A. Happ pitched more like C.Y. Happ today as the A's lost 3-1 to the Toronto Blue Jays. The A's have lost four straight for the first time since May 6-10, 2013, when they lost five. The Blue Jays are a good team; they are now on a run of six straight victories by contributing to Boston's now 10-game losing streak. The A's are also a good team going through a rough patch, just missing on a few swings today. The Athletics Nation company line? Good luck Toronto in the AL East. 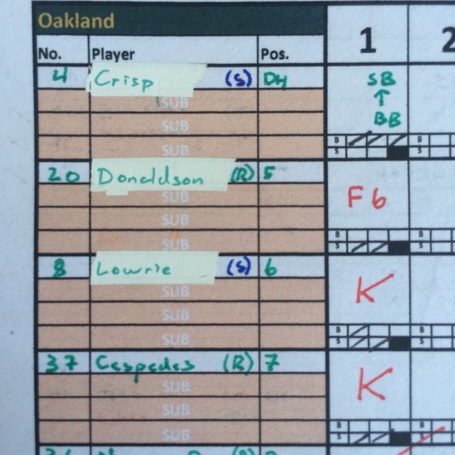 Things looked bright at first when J.A. Happ started the game with four balls to Coco Crisp. Crisp stole second soon thereafter, but neither Josh Donaldson, nor Jed Lowrie, nor Yoenis Cespedes could move the line any further.

Drew Pomeranz entered today with fifteen scoreless innings as a starter, but looked shaky in the first. Walking Jose Reyes is never a good idea, and he promptly stole second base. Then, Melky Cabrera then grounded to Jed Lowrie; Lowrie looked Reyes back to second, but the instant Lowrie threw to first, Reyes took off for third. Despite Kyle Blanks' snap return to third, Reyes was safe at third, carrying over his spectacular base running from yesterday.

Pomeranz next faced Brett Lawrie, who speared a 1-1 pitch between first and second. Kyle Blanks dove all of his six-foot-six frame to stop the ball on one hop and prevent the RBI, walking the ball over to first to end the inning.

I give him two exclamation points. RT @athleticsnation: Daric Blanks on defense. pic.twitter.com/NEfBjMvCwh

The teams traded scoreless second and third frames, Gentry bunting aboard and stealing second base in the third. Drew Pomeranz had conceded two walks, but no hits through three innings compared to Happ's two hits allowed. 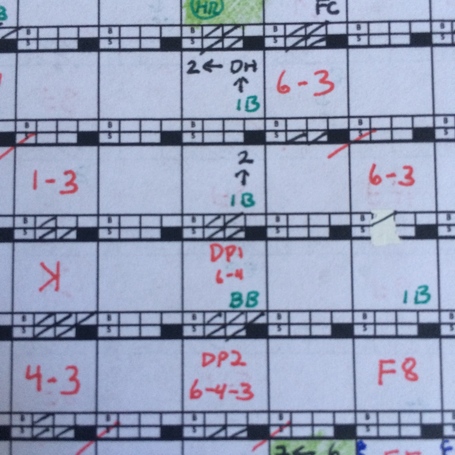 With one out in the fourth, however, just as Vince Cotroneo exclaimed "They [the A's] have the only two hits today!" Edwin Encarnacion knocked out his 13th home run, his 11th in the month of May. Things began to look dire as Brett Lawrie and Dioner Navarro both singled, and former Oakland Athletic Steve Tolleson walked to load the bases with one out. Fernando Rodriguez was warming to enter in the fourth, and Curt Young came out to offer some magic words to Drew Pomeranz ("PRINT SANDWICH"). And oh it worked out, because Erik Kratz grounded into a 6-4-3 double play to escape the bottom of the fourth, 78 pitches in.

The fifth inning started off with promise, as Kyle Blanks squibbed a single to lead off, but other than a Josh Donaldson walk, the A's could not do anything to move Blanks. There was hope, however, as the A's had Happ up to 90 pitches through five, and perhaps they could knock him out of the game with a good at bat or two. 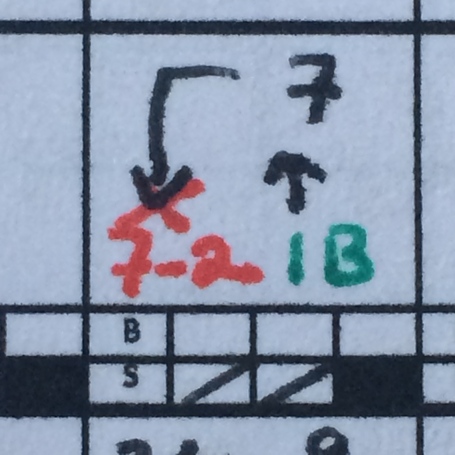 Pomeranz started the bottom of the fifth, but only gets a "+" as credit for pitching in the fifth: single, single, walk. Jim Johnson entered with nobody out and the bases loaded. Given how the A's had been struggling on offense, things were not looking good for mounting a comeback. On his first pitch, Jim Johnson got the ground ball he wanted as Bautista beat a sinker into the dirt in front of home plate, but it bounded forward between second and third for a base hit to score Kevin Pillar. Jose Reyes was waved around third, but Cespedes threw a great one-hopper on line to Derek Norris, who applied the tag to nail Reyes at the plate. 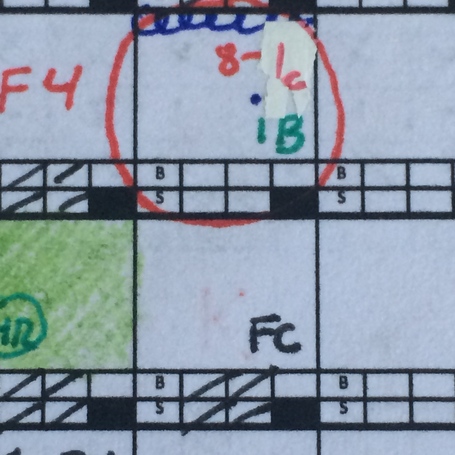 Now with one out, Edwin Encarnacion skied a high fly ball toward shallow center. Alberto Callaspo went out, vehemently attempted to wave off Craig Gentry as he continued running back, but Gentry kept coming until Callaspo heard his foot steps and ran off, the ball falling in between them. The runners, having to hold, and the infield fly rule not declared as the ball was a little too deep for Callaspo's ordinary effort to make the play were now forced to go. Jim Johnson, having seen this sequence develop, ran from third base to cover second and called for the ball at second base. Gentry threw to Johnson, Bautista was called forced out at second base 8-1 on a very close play.

Toronto challenged the play, and if the call was made on replay alone, Bautista might have been safe, but it was close enough for it to be deemed inconclusive. Toronto manager John Gibbons was thrown out of the game for leaving the dugout to argue the result of the replay but no matter. Jim Johnson had managed to get two outs giving up only one run so far. Brett Lawrie promptly grounded out, and somehow the A's were only down 2-0 through five.

The shortest sixth and seventh inning 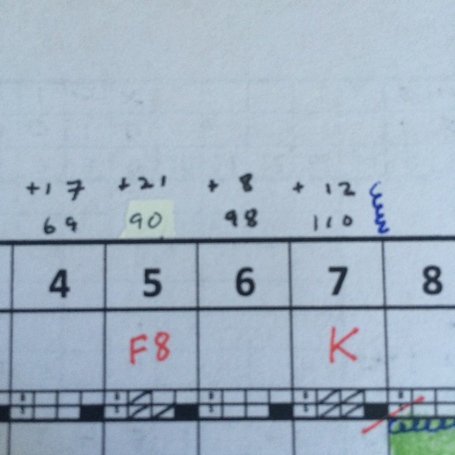 J.A. Happ's 90 pitches through five innings should have meant his day was nearly through. However, in an absolutely frustrating sequence of six batters, (1) Cespedes struck out on four pitches, (2) Norris doubled on a first-pitch blooper down the right field line, (3) Moss flew out to short on one pitch, (4) Alberto Callaspo hit a second-pitch deep drive to left that Melky Cabrera caught at the fence, (5) Kyle Blanks flew out to right on one pitch, and (6) Craig Gentry slapped a second-pitch grounder to third. Six batters, 11 pitches. Coco Crisp finally worked the count with two-out in the seventh, fouling off pitch-after-pitch before striking out on nine pitches, but Happ survived seven innings before handing it over to his bullpen. 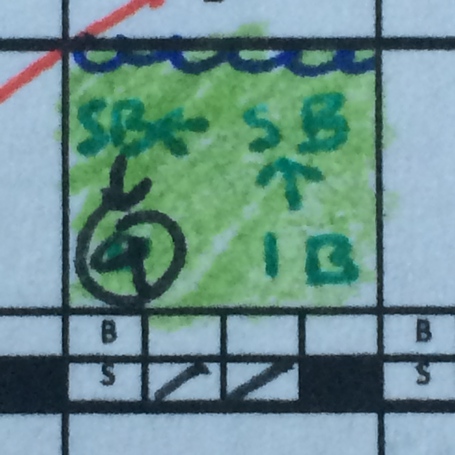 Luke Gregerson was finally given a clean inning to work with, now starting the seventh inning. Jose Reyes got aboard again on an 0-2 single, and Reyes went to work against an Athletics defense that had, including Reyes' steal in the first, allowed 32 of 36 runners to advance this year. Reyes took second, and then he took third during Melky Cabrera's at bat, and Jose Bautista drove him home with a sacrifice fly to left. Encarnacion flew out, and the A's trailed 3-0. 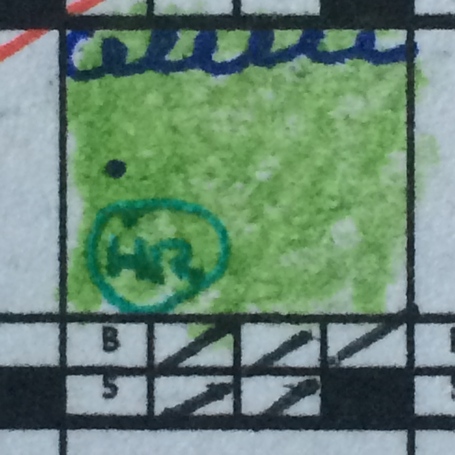 Dustin McGowan relived J.A. Happ in the eighth. On a full count, Josh Donaldson launched his eleventh home run of the campaign to tighten things up to 3-1. But that was it for the A's today. McGowen finished off the eighth without further incident, and Casey Janssen picked up the save with a 1-2-3 ninth. Blue Jays 3, Athletics 1. 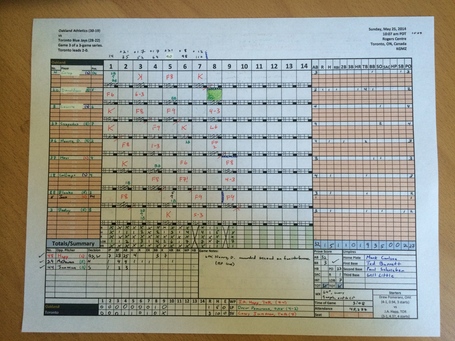 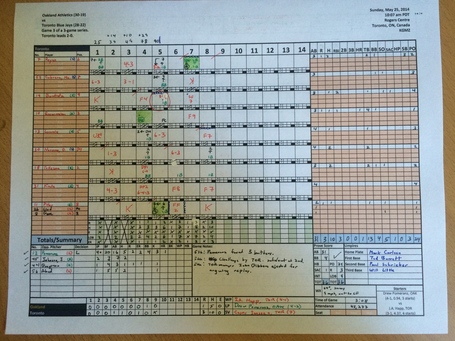