You know how the A's are the best team in baseball right now, what with the best record and best run differential and best starting rotation and best offense? Yeah. Let's not talk about that.

Let's talk about this: 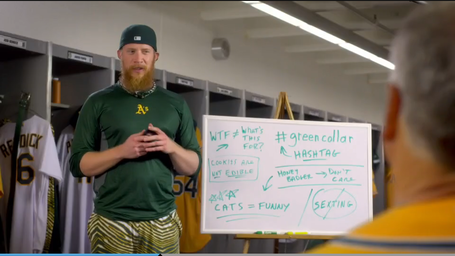 That's a screenshot from one of Oakland's most recent commercials, entitled "#Winning," in which Sean Doolittle gives A's coaches Bob Melvin, Curt Young, and Mike Gallego a crash course in social media. It's as good an ad as the A's have ever made, which is saying quite a bit.

It starts off with Josh Donaldson explaining: "A lot of the players are pretty into social media these days. So we thought we'd try to get the coaches into it."

Cut to Doolittle — man, is he rocking the hell out of those green and gold Zubaz — wrapping up his social media lecture and opening the floor up to questions.

"Can I...blog from my BlueBerry?" asks Bob Melvin. He's playing the part perfectly. Apparently he's more social media-aware than he gets credit for, having made a secret Twitter so he can monitor his players, and the media.

Cut back to Doolittle, and the glorious whiteboard that some bored and genius A's marketing intern probably drew up a few minutes before the shoot. It informs us that the letters W, T, and F do not, as a matter of fact, stand for "what's that for?" Cats are funny, or so says the board, and cookies are not edible. The Honey Badger does not appear to be of any concern to the Athletics, and least interestingly, the hashtag in "#greencollar" is clearly labeled.

Of course, a blanket ban on sexting is paramount for a social media-savvy ball club. Gallego, Melvin, and Young have pretty much zero recourse if they get caught slipping up on that one later in the season.

So while you read stories about players biting off their teammates' ears, or how the most exciting thing in the Yankees' clubhouse is that they like candy, or how some teams' managers can't even make pitching changes correctly, just take a moment to appreciate these A's. They're not just cutting up the American League worse than a Giants pitcher accidentally cuts up his own fingers — they're a group of truly fun, likable individuals who are easy to get behind on a personal level, not just as baseball players.

This is a good team to root for, in more ways than one.