With the A's and Rays squaring off for three games, I asked Ian Malinowski of DRaysBay a few questions about his favorite team. Here's what he had to say!

The Oakland Athletics started their nine-game road trip by sweeping Cleveland, which is just fantastic. Next up is a date with Tampa Bay. The Rays, who were my preseason pick to face the A's in the ALCS, are in last place in the AL East with the second-worst record in the league (19-26). Granted, they lost starting pitcher Matt Moore to Tommy John surgery in April, but there is still enough talent on the roster that you have to expect them to turn things around soon. Meanwhile, the A's are living the high life, with an AL-leading 28 wins and a Planet Earth-leading run differential of plus-95. Historically, most teams who have racked up that kind of differential in a quarter of a season have at least appeared in the World Series, which is a neat stat that you should ignore so as not to jinx us you jerk.

Pom and Tom are both on fire (in the good way, not the bad, burny way), and they will try to continue their hot streaks in Tampa Bay's noted pitcher's park. Wait, Tropicana Field has been the fifth-best hitter's park so far this year? That makes no sense and surely won't continue. Bedard is somehow still in the Majors, and he's doing quite well this year; more on him in the Q&A. Archer and Odorizzi are each struggling a bit with walks, which should be a lot of fun for Oakland's ultra-patient lineup. And if something should go wrong in these first two games, there is always the promise of Sonny skies on Thursday. Weather puns will never, ever get old as long as Sonny is an ace.

1. How is Rookie of the Year Wil Myers doing in his sophomore season? Have there been some growing pains, and if so, what can he do to overcome them?

A Q&A with Alex Hall of Athletics Nation

A Q&A with Alex Hall of Athletics Nation

IM: Well, he's been a below-average hitter so far, with a 96 wRC+, so there are definitely growing pains. For Myers, it really comes down to approach. He can hit a fastball in the zone as well as anyone in the league, but all of these pesky major league pitchers just aren't giving him that many fastballs in the zone. He's really struggled with breaking balls low and away, chasing them off the plate. I think his turnaround will be a matter of understanding how he's being attacked and recognizing pitches better.

On the other hand, we've seen defensive improvement from Myers, as compared to last year. He's turning into a pretty good outfielder, with a competent right-field arm. And while his demeanor is laconic at times, no one in their right mind should be accusing him of being lazy. Myers gets down the first base line as fast as anyone on this team. He'll post a high BABIP through his career both because he hits the ball hard and because his athleticism and hustle will win him enough infield hits to matter.

2. What is the injury status of Ben Zobrist, who left Wednesday's game with a thumb injury?

IM: Zobrist dislocated his thumb sliding into second base, and while it sure looked painful, I doubt it will keep him out much beyond the minimum 15-day span. In the meantime, the Rays do have plenty of middle infield depth, particularly against lefties, so it's considerate of Oakland to have two of the three games started by lefties. Logan Forsythe is off to a slow start but the Rays think his bat is better than what we've seen to date.

3. James Loney was signed to a relatively large contract by small market standards, and he's off to a good start so far in 2014. Were you happy with that deal when it was signed, and would you do it again today?

IM: I was lukewarm about the deal at the time, but Loney has won me over. There's a theory in these parts that the Rays' hitting coach, Derek Shelton, is especially successful when working with contact-type hitters. I'm not completely convinced, but it's undeniable that Loney has looked nothing like his 2012 self at the plate. And while the power surge from last year hasn't shown itself in 2014, he's walking more and striking out less, and he sprays line drives to all fields (completely shift-proof). Add in his dependably slick defense, and I actually think Loney will be able to provide good value through the life of his contract. 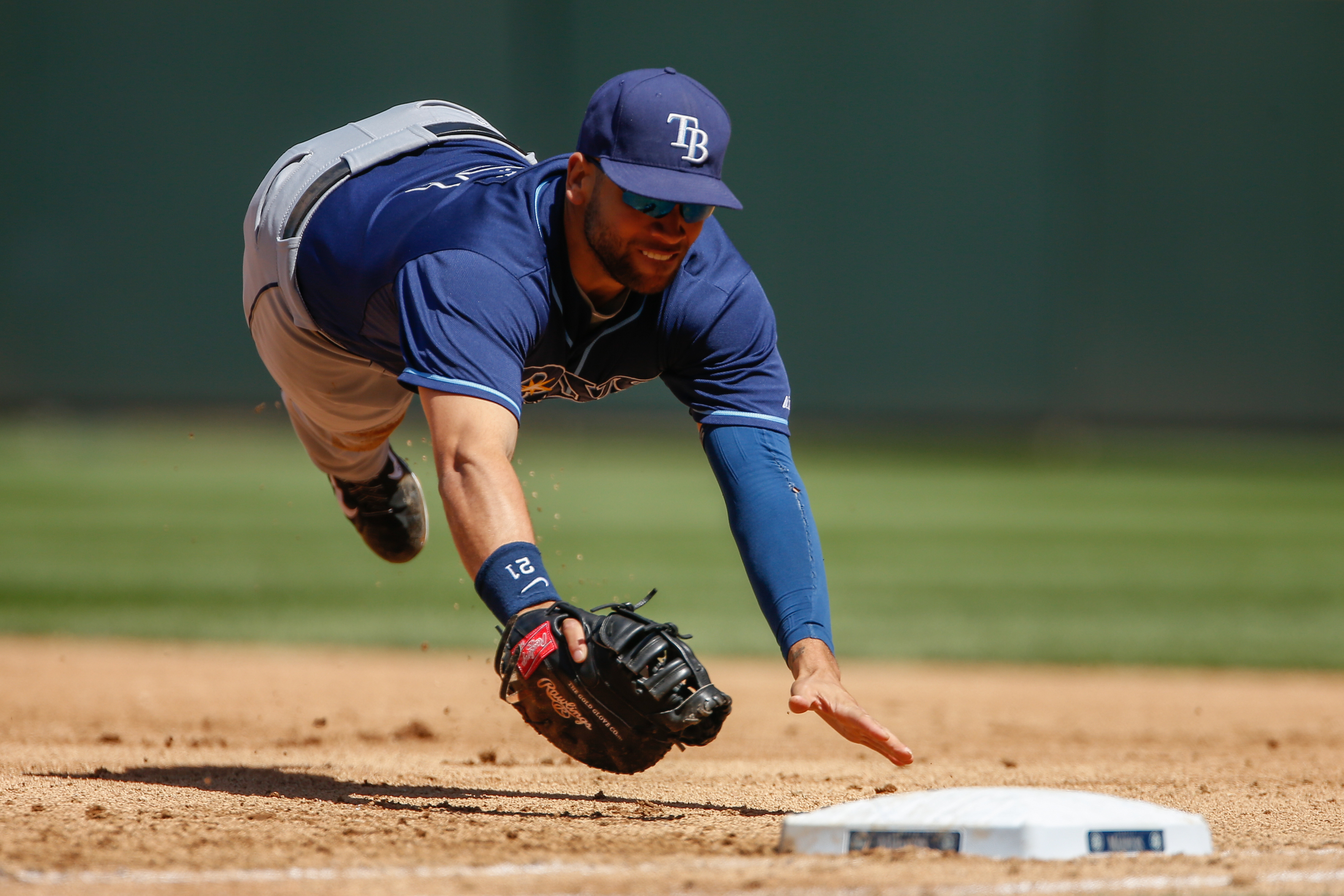 Loney is a good hitter now, for some reason. I wonder how the Rays will fix Daric Barton in 2019? -- Photo credit: Otto Greule Jr

4. Former Athletic David DeJesus has played a big role in the Rays' offense -- he leads the team with an OPS+ of 125. What other hot hitters should A's fans look out for in Tampa Bay's lineup?

State of the Rays: The value of Run Differentials

State of the Rays: The value of Run Differentials

IM: You probably won't see him until the Sonny Gray game, but Matt Joyce is the best we've got against right-handed pitching, and he's a guy who's rarely gotten his due around the league. He needs to be platooned, but when he does get to face a righty, his approach is fantastic (he almost never chases low breaking balls). The Rays have gotten him to make a conscious effort to go the other way against the shift, and it may be hurting his power, but I'll take the tradeoff for a .376 OBP any day.

Also, watch out for Desmond Jennings. He's cooled off in the last couple weeks, but he's settled in as one of the better center fielders in baseball with great speed and sneaky power.

5. The rotation seems to be struggling, which is uncharacteristic. David Price, Chris Archer, Jake Odorizzi and Cesar Ramos all have ERA's above 4.25. What do each of these guys need to do to turn things around?

IM: David Price is pounding the zone, as shown by his 77:6 strikeout-to-walk ratio. His problems all come down to a high BABIP, and as pointed out by Jason Collette at The Process Report, it's a high BABIP with two-strike counts. Now part of this is that with the Rays' second, third, fourth, and sixth/seventh starting options are all out due to injury, or in the case of Alex Colome (option six/seven), a positive drug test. Price is working his hardest to pitch deep into games and to save a ragged and over-taxed bullpen. It might be that his BABIP will right itself on its own, with minimal change in approach, as they often tend to do, but he might do well to pitch away from contact slightly more with two strikes.

Chris Archer needs to limit his walks, and in an ideal world, continue to develop his changeup. He's essentially a two-pitch pitcher right now, with both his fastball and hard slider being plus-plus offerings, but over his still-young career, he's actually not shown a giant split (it was big last year, but has been reverse this year). The real problem, though, is the walks. He can go long stretches with good command, but then lose it for a few batters, and dig himself a hole.

Jake Odorizzi already has made an adjustment. This offseason he learned a new pitch, a splitter, from Alex Cobb, and he started off throwing it a ton. The first time through the order it worked great, but the second and third time through, guys started hitting the splitter (which while interesting, is not nearly as good as Cobb's version). In the past two games, though, Odorizzi has scaled back his splitter usage, and relied more on his big, slow curve to keep hitters off-balance. Right now it looks like he's figured out a way to pitch in the bigs, and I find myself looking forward to Odor's starts most these days.

Cesar Ramos is not going to turn things around. He's our long reliever, and he's soaking up the starters' innings well, but he simply doesn't have the stuff or the pinpoint command to succeed in the role forever. He attacks the zone, mixes his pitches, and moves them around, but sometimes the other team is going to hit him hard, and that's just something Rays fans have got to live with right now.

6. How long do you think Erik Bedard can keep this up? He has a 2.78 ERA in seven games (six starts) despite a questionable walk rate and his well-known injury baggage.

IM: Do I think he can keep up a 2.78 ERA? No. Do I think he can go the entire season without giving up a home run? No. But Erik Bedard has pitched well of late, and his 10 percent walk rate is being influenced from some bad starts earlier in the season when he was apparently still building arm strength. He may not throw in the mid-90s anymore, but Bedard still misses bats with his fastball, and I don't think it's overly optimistic to say that he can be a league-average pitcher going forward.

7. What is the injury status of starter Alex Cobb and his strained oblique?

IM: He's back. Y'all get the honor of facing him Thursday. Enjoy! Never mind. It turns out Cobb is set to pitch Friday against the Red Sox, not Thursday, so no, you will not face him. Rats. I retract my grin.

The Rays Tank: Gomes to Durham, Cobb back Thursday

8. Many A's fans were crushed to lose closer Grant Balfour last winter. What are your first impressions of the Mad Aussie, both in terms of performance and personality? Have the locals taken to him, or is he your version of Jim Johnson with all the walks?

IM: Rays fans were excited to have Balfour return, as he was a huge part of the success of our bullpen from 2008-2010, but the reunion tour hasn't gone very well. The velocity on Balfour's fastball has been down a few ticks, and he seems not to trust the pitch at times, hugging the edge of the zone with his slow stuff (he's said as much after games). It's easy to love Balfour's demeanor when he's sitting people the f___ down, but it wears thin when he's walking guys and blowing games.

His last time out, Balfour was aggressive again, pumping fastballs into the zone, and he looked good. I expect him to figure it out, but right now, Jake McGee is the only Rays reliever that we fans have real confidence in.

9. What's your favorite name on the Rays: Odorizzi, Boxberger, Riefenhauser, or a pitcher named Balfour?

IM: I'm a big fan of Odorizzi. I shorten it to Odor, but a number of people in the community call him Hodor (from the HBO series Game of Thrones) and say/type "Hodor" (cumulatively) every time he gets a strikeout. My favorite Rays name manipulation, though, has to be for Ben Zobrist from when he first developed his power in 2008 and sustained it into 2009, transforming from a meek, slap-hitting middle infielder into "Zorilla." Right now, Zorilla might be getting old, and he does have an ISO lower than at any point since 2008, but the name never gets old.

Thank you, Ian, for participating in the Q&A!

The series kicks off in about half an hour. First pitch is scheduled for 4:10 p.m., Pomeranz vs. Odorizzi. It's a battle of former top prospects who have been traded from their original teams and are fighting to make good on their former prospect statuses. Pomeranz currently has a 1.14 ERA, so, that's a good start if your goal is to pan out. Lowrie is out of the lineup, as expected, and Punto is starting at short. No DeJesus for Tampa Bay.