Red Sox Series Preview: Q&A with Joon Lee of Over The Monster

With the A's and Red Sox squaring off for three games, I asked Joon Lee of Over The Monster a few questions about his favorite team. Here's what he had to say!

Share All sharing options for: Red Sox Series Preview: Q&A with Joon Lee of Over The Monster

The Oakland Athletics are back on top of the world. After hitting their first (brief) slump of 2014, they turned around and swept the division rival Texas Rangers on the road in dominant fashion. No longer can anyone say that the A's haven't beaten any good teams, even if their overall schedule has still been a bit weak. The opposition will heat up a bit this weekend, as the A's take on the defending World Champion Boston Red Sox in Fenway Park. Playing in Fenway is never an easy task, even for the team with the best record in the league (18-10) and the best run differential in the Majors (plus-59), and even for the club picked by ESPN's David Schoenfield as the best in MLB in April.

The A's will not be throwing the cream of their rotational crop against the Red Sox. Straily and Milone will have to keep the ball in the park to have any chance of defeating Buchholz (1.74 ERA last year) or Lester (43 K's to eight walks so far this year). The finale will feature a matchup of Sonny Gray, coming off his first career shutout on Monday, and John Lackey, who's been as good as Lester so far. On the bright side, the Red Sox played a doubleheader on Thursday and five Boston relievers combined to throw 5⅔ innings, so it's possible that the well-rested A's could have an extra advantage over an opponent who will be slightly more fatigued than normal.

1. The Red Sox have two top prospects in starting roles this year. One is shortstop Xander Bogaerts, who was the preseason No. 2 prospect in baseball. It appears that he's off to a solid start at the plate. Now that you've seen him for a couple hundred plate appearances dating back to last year, what are your first impressions? Will he live up to the hype?

Joon Lee •Over the Monster

JL: The thing that really sticks out with Bogaerts is his excellent approach at the plate. His ability to take pitches and not chase after bad pitches in the dirt is particularly impressive, considering that some scouts considered plate discipline to be his weak point, hitting-wise, a little over a year ago. The strides he has made and his ability to make adjustments are absolutely astounding. That being said, April has not been the greatest month for Bogaerts, particularly due to the weather, something he is still not adjusted to after spending the first 16 years of his life in Aruba. Bogaerts has historically struggled in April before really turning it on in May. While he has only hit two home runs in the majors, both have gone over 440 feet, displaying the pure raw power potential that he has. His maturity at the age of 21 is incredibly impressive and I fully expect him to live up to the hype.

2. The other newcomer is center fielder Jackie Bradley. He had a rough time in his first go-around last year, posting a .617 OPS in 107 plate appearances. Is he looking better this time around? And how is his defense in center?

JL: Jackie Bradley is starting to show what kind of player he truly is, an incredible defensive outfielder with an advanced approach at the plate. Bradley has displayed the qualities of a future leadoff hitter, particularly with his ability to see a lot of pitches in nearly every at-bat. He has improved on turning on the inside fastball and has begun to hit the ball to all fields, a sign from his days in the minors that he is locked in. Defensively, Bradley could win a Gold Glove this year. He has among the best defensive instincts I have seen from an outfielder. His ability to track fly balls is impeccable and his range in center field is otherworldly.

3. The spots for Bogaerts and Bradley opened up due to the losses of Stephen Drew and Jacoby Ellsbury in free agency. Did the presence of the young replacements factor into the decisions to let those guys go? Would you have preferred to keep one or both of them rather than rolling with the youngsters in a contending season?

JL: With Bogaerts struggling defensively and John Farrell struggling to find a definitive leadoff hitter, the departure of both Drew and Ellsbury have been felt in the early parts of the season. Despite his unfair injury-prone stigma, Ellsbury provided a steady presence at the top of the lineup and his ability to set the table at the beginning of games has been missed. With Drew, the part of his game that has been missed has been his consistent defensive presence, although I feel that once Bogaerts turns up his bat a couple of notches, all will be forgotten with Drew. 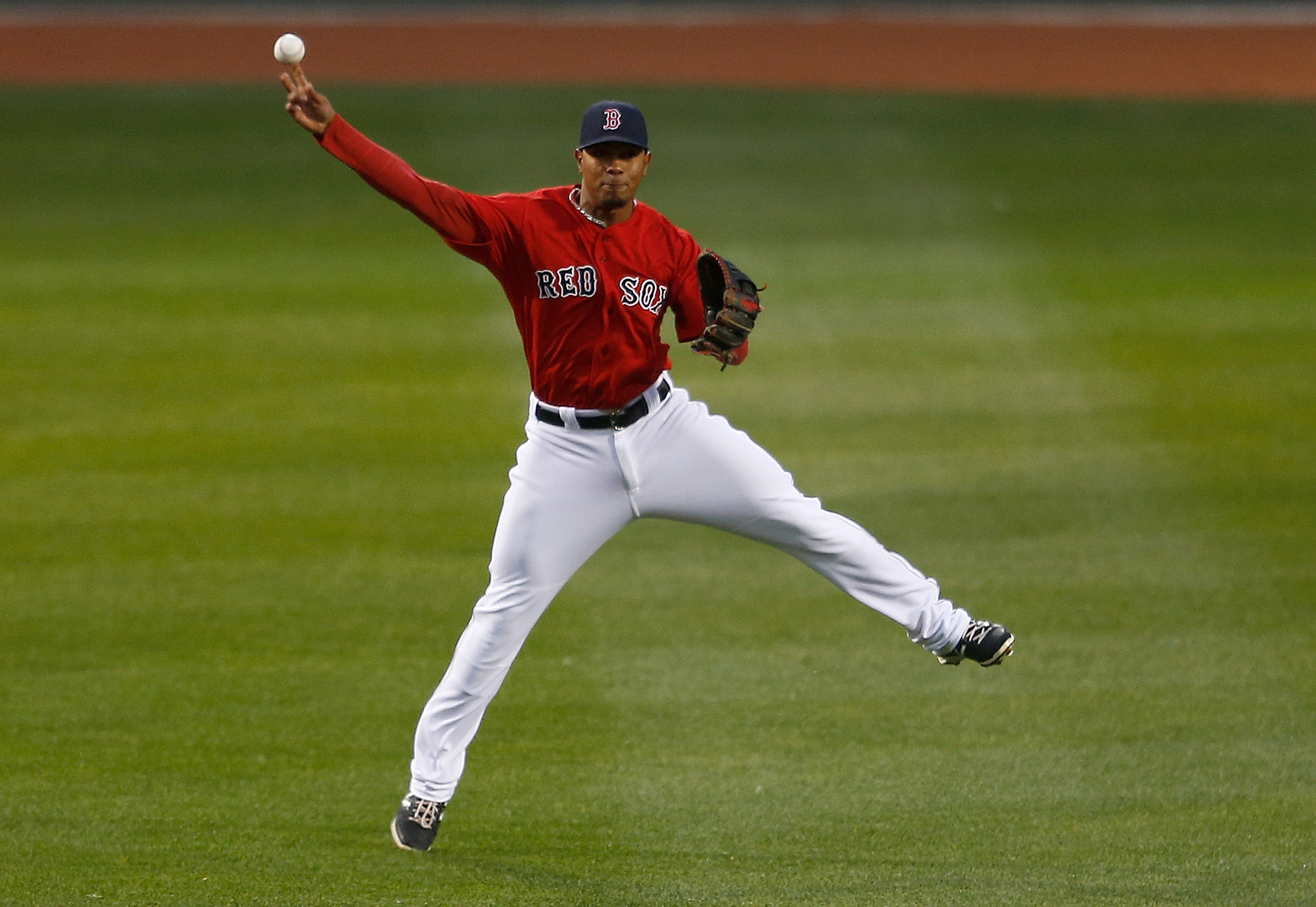 Xander Bogaerts is ... umm, I'm not actually sure what he's doing. Is that how he always throws? -- Photo credit: Jim Rogash

4. Third baseman Will Middlebrooks is another young player who is still making his mark in the Majors. His sophomore season went so poorly that he was demoted to Triple-A for nearly two months, but he's off to a good start so far this year. Will this be his breakout year, and if so, what changed?

JL: Will Middlebrooks is still big question mark for me. He has shown the potential to be an excellent major league third baseman, and at other points he has only displayed the potential to be Mark Reynolds 2.0. While I do expect Middlebrooks to be better than he was last year, I don't expect him to be the star third baseman that some may have expected him to become when he came up. Middlebrooks still struggles from time-to-time with his approach at the plate and struggles on the breaking ball on the outer half of the plate.

5. How is the Grady Sizemore comeback experiment going?

JL: It hasn't been the strongest month for Grady Sizemore so far. Sizemore told me on Wednesday that he is still trying to find his daily routine again and feel 100% every single day, something he feels like he hasn't been so far. He is still shaking off the dust, and the rust in has game has been pretty evident. After a really strong first six games, Sizemore has struggled at the plate, although his 80 percent contact rate (the same as it was during his glory days with the Indians) seemingly indicates that he will get it going at the plate again.

6. Shane Victorino missed the first three weeks of the season, but he returned to the lineup on Saturday. What was up with him, and will it have any lasting effect on his season?

JL: Victorino had a couple of nagging injuries at the beginning of the season that put him on the disabled list. I doubt that it will play a huge role moving forward, but injury is always a concern with Victorino.

7. Jon Lester is a free agent at the end of the season. Will the Red Sox give him a long-term deal, or let him walk? What would you do, and how much would you offer him?

Mujica, Melancon, and the need for patience

Ben Buchanan •Over the Monster

Mujica, Melancon, and the need for patience

JL: With the vast pitching coming up in the minors, I think the Red Sox will let Lester go unless he begins to come down from his contract demands. While he indicated before the season that he was willing to take a "hometown discount," the team and Lester appear to have a differing definitions of what that exactly entails. Following the Carl Crawford and Adrian Gonzalez contracts, the Red Sox have (unsurprisingly) shied away from long-term deals with the exception of the Dustin Pedroia extension.

I would try to re-sign Lester on my terms. While the reported four-year, $70-80 million extension is a total lowball, I would not commit seven years to him, especially because he is a pitcher. For a pitcher of Lester's track record and postseason success, a five-year deal for $105 million or six-year deal for $114 million makes the most sense to me.

8. Koji Uehara is picking up where he left off last year, with 17 strikeouts and one walk in 9.2 innings. What other key arms should A's fans look out for in Boston's bullpen?

JL: Andrew Miller is a shutdown lefty out of the pen with an absolutely wipeout slider and high 90s fastball. Junichi Tazawa has been one of the best relievers in the majors, as pointed out by Beyond the Box Score, and Chris Capuano has been a welcome addition to the pen so far this season.

9. Which are more powerful: Jonny Gomes' forces of good, or A.J. Pierzynski's forces of evil?

Thank you, Joon, for participating in the Q&A!

The series starts today. First pitch is scheduled for 4:10 p.m., Straily vs. Buchholz. The bad news is that Buchholz's two available settings are usually "awesome" or "injured," and I'm unaware of him being injured right now. The good news is that you can forget that previous sentence because he is currently sporting a 6.66 ERA (which I can only assume is related to Pierzynski somehow) with four homers and 39 hits in only 25⅔ innings. Oh, and Oakland is fourth in the Majors in scoring, so that should help too. And on top of that, the A's teed off on him the last time they faced him back in April 2012, before they were even good (six runs and five walks in 6⅔ innings and a homer by Reddick; never mind that Boston won 11-6). Straily has somehow never faced the Red Sox, which means he has never lost to them.