Scott Kazmir was right...kind of

Scott Kazmir was ejected by Jerry Layne for arguing balls and strikes. But, was he right to argue?

Share All sharing options for: Scott Kazmir was right...kind of

How could he have called that a ball?!?! I've seen it twice now: Scott Kazmir throwing a beautiful fastball, painting the lower edge of the plate for what should have been strike three looking. Yet, instead of a strikeout for Kazmir, it was a walk for Jesus Aguilar, putting runners on the corners with one out in the second inning.

Kazmir's frustrations got the best of him, he began jawing a bit at the home plate umpire, and, before he, Bob Melvin, or anyone watching that game knew it, Kazmir had been tossed in the second inning, just 41 pitches into the game. Oakland was then forced to rely on its bullpen for seven and two thirds innings because its starting pitcher had been thrown out for being frustrated with an umpire on a questionable call.

Thankfully, the A's managed to pull out a win 6-2 over the Indians, primarily from Dan Otero's magnificent pitching over three and two thirds innings after Kazmir was ejected and some strong hitting from Josh Donaldson and Brandon Moss. But, that doesn't change the issue at hand: Should Scott Kazmir have argued with the home plate umpire over balls and strikes? And, was he right?

On the basis of "the umpire makes the calls, don't argue," no, Kazmir was not justified in arguing. To some extent, players need to allow the umpires the authority to make calls. Fans of all teams will always be frustrated by good and bad calls by umpires that negatively affect their teams. Umpires are human, and they make mistakes. That's just part of the game.

Kazmir's first walk of the inning, issued on a 3-1 count against Asdrubal Cabrera, came as the result of a low and outside fastball. While close, and while it was framed well by Derek Norris, it was a ball. Take a look at the pitch (Pitch 5) in this strike zone chart from BrooksBaseball: 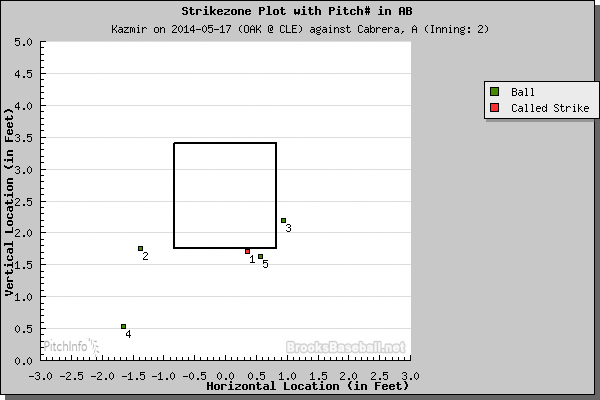 It's close, but it's just outside of the strike zone. At this point, Kazmir was likely frustrated for missing his spot. He put his hands on his hips, looked towards home, and put his glove up as Norris tossed him the ball back while Cabrera trotted to first.

It's the next walk that Kazmir issued, though, that set him off. After allowing a double to Indians catcher Yan Gomes, Kazmir threw a wild pitch to Jesus Aguilar, which sent Cabrera home from third. Later in the at bat, facing a full count, Kazmir threw a fastball low and over the middle part of the plate that was called a ball. Here's where that pitch, Pitch 7, landed: 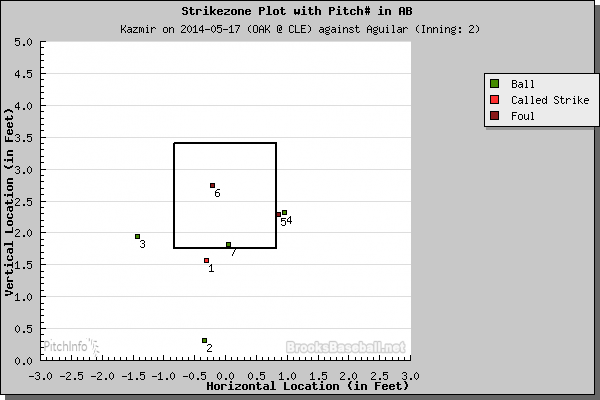 Your eyes do not deceive you: Kazmir's last pitch should have been called a strike. It was, according to PITCHf/x, a strike. And, what's worse, Pitch 1 was a called strike that was about half a foot below Pitch 7.

But, as we all know by now, the people making the calls behind home plate are just that: people. Layne made the wrong call, Kazmir expressed his anger, and Layne ejected him from the game almost instantly.

Fortunately, there is a silver lining to all of this. Kazmir left the game in the second inning because he was ejected, not because he was injured—which would have been far worse—or because he got knocked around, like Clayton Kershaw, who let up seven earned runs in under two innings against the sub-.400 Arizona Diamondbacks.

And, to top it all off, the A's swept the Indians this weekend, scoring a grand total of 30 runs. It's funny: a walk put good ol' Scott out of the game, yet the A's walked all over the Indians three games in a row.

If you want to watch it all over again, here's the video:

All statistics courtesy of BrooksBaseball.

Evan Kendall is a featured writer at Beyond the Box Score, co-founder of The Sports Post, and front page writer at Athletics Nation. You can follow him on Twitter at @Evan_TSP.