With the A's and Indians squaring off for three games, I asked Jason Lukehart of Let's Go Tribe a few questions about his favorite team. Here's what he had to say!

The Oakland Athletics have won six of their past seven games. Unfortunately, the loss came in the most recent contest and was the result of yet another blown save, but at some point you just have to be satisfied with an .857 winning percentage in a one-week span. Even better, the A's get a crack at revenge against the Cleveland Indians, who stole two out of three in Oakland to start the season.

The Tribe swept the A's in four games in Cleveland last May, but history is stupid and you should always ignore it lest it repeat itself. (Isn't that how it works?) The A's still have the most wins in the American League and the best run differential in baseball (plus-71), and they have their top three starters going in this series, so the outlook is as good as it can be. Furthermore, John Shea reported Wednesday that Coco Crisp could return this weekend, and could even be in the lineup on Friday. This is the last series against the Indians this year, so one way or another we won't be seeing them again unless we meet in the playoffs.

1. Michael Brantley looks like the best hitter on the Indians so far. What has led to his breakout? And how does his performance make you feel about the four-year, $25 million contract he signed in February?

JL: He's shown a lot more power than in years past. He's already hit seven home runs, after setting a career-high with 10 of them in 2013. He entered the year with a .382 slugging percentage for his career, but he's at .482 so far this season. I don't think his "true" power is quite that high, but I was happy with the extension he signed when I thought he was a somewhat above-average hitter. If even half the growth he's shown is legitimate, that contract (five years, $31.5 million, taking him through his age-31 season) is going to work out really well for the Indians.

2. What is the injury status of Jason Kipnis (strained oblique). Is there any chance we might see him in this series? And if not, who plays second base?

JL: Kipnis is hoping to be back by Memorial Day, and certainly won't be playing this weekend. Kipnis was the team's best player last year, so losing him for three or four weeks is a tough blow, but Mike Aviles has done pretty well as his temporary replacement, with 13 hits in nine games since taking over. Aviles has also played third base, shortstop, and left field at times this season, providing a lot of versatility.

3. How is Carlos Santana working out at third base? Has his positional move been successful, or is it still too early to tell?

Carlos Santana is in a slump for the ages

Carlos Santana is in a slump for the ages

JL: His defense has been a lot better than just about anyone expected. He's made three errors, which isn't too bad, and he's made some really nice plays out there. He's probably been a bit below-average overall, but for someone still learning the position, I think that's alright. The problem has been his hitting. Due in part to an ugly .165 BABIP, he's carrying a .158 batting average, making his slump one of the worst ever to start a season. His elite walk rate means he's still got a (slightly) above-average on-base percentage, but his .630 OPS is a far cry from his team-best .832 from a year ago.

4. John Axford was recently demoted from the closer role. Who has taken his place? And do you think this move is permanent, or will Axford end up in the ninth inning again soon?

JL: He's been replaced by the good old committee. Bryan Shaw and Cody Allen are likely to see the highest-leverage innings and be given the most save opportunities, and if one of them pitches especially well, I wouldn't be surprised to see him handed the job. Terry Francona has said he'd prefer not to do that, but in my experience, MLB managers rarely stand by that sentiment for long. Axford will be given the chance to pitch his way back into it, but I don't know that he's going to pitch well enough to actually make it happen. 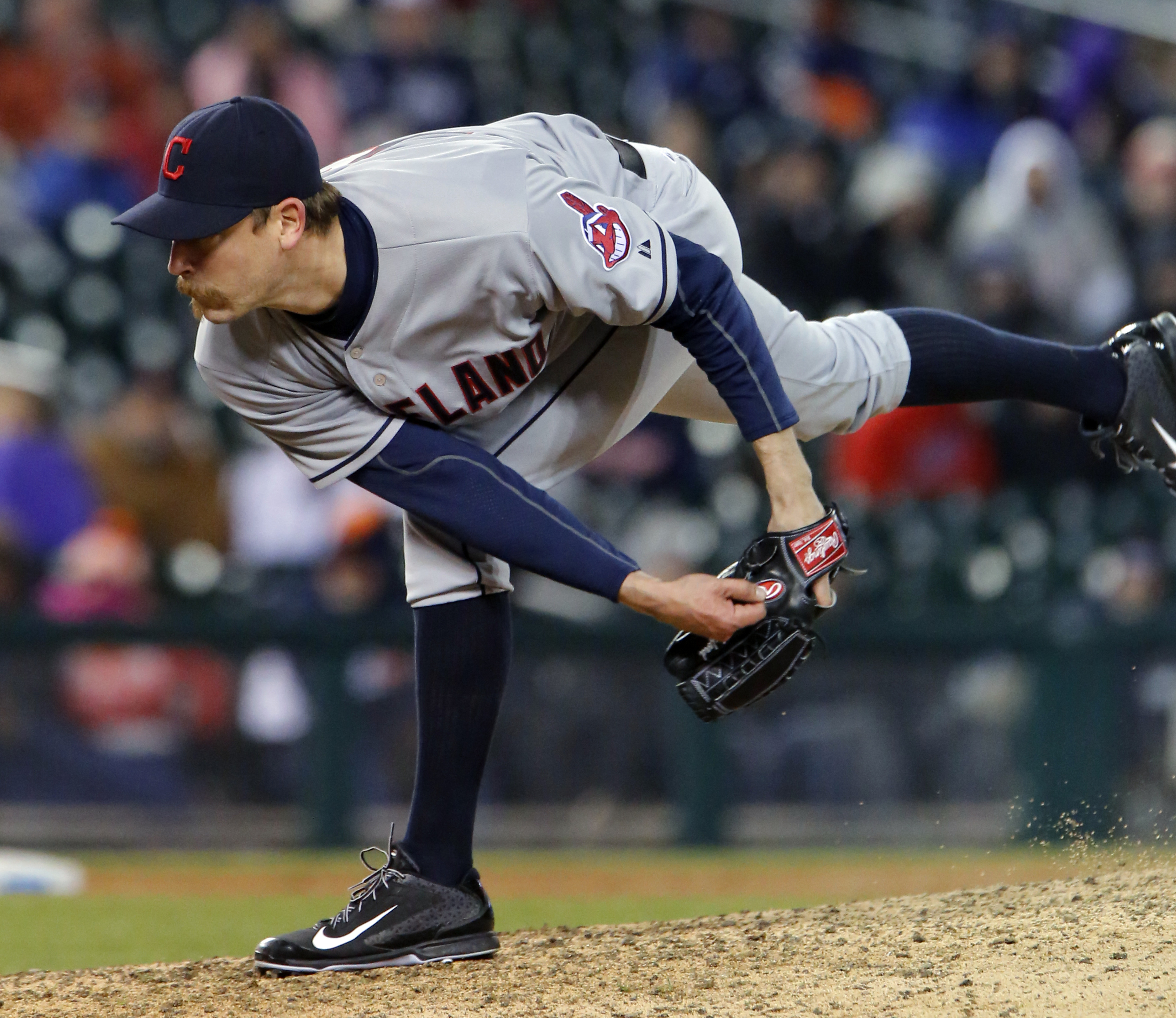 5. Justin Masterson (Sun starter) hasn't been at his best so far this year. Is there anything wrong with him, or will his performance even out as the season progresses?

Justin Masterson's velocity is way down in 2014

Justin Masterson's velocity is way down in 2014

JL: Masterson's strikeout and walk rates aren't far off what they were last season, so it could be that his pedestrian numbers (a 4.31 ERA and 1.38 WHIP in nine starts) are somewhat a matter of bad luck (his FIP is a much healthier 3.70). His velocity is way down from early last season though, and he's not throwing his fastball nearly as much; this has me somewhat concerned that he's nursing an injury, one he may not even be aware of. The Indians weren't able to work out a long-term contraction extension with him this offseason, and right now that's looking like a wise decision on their part.

6. Josh Tomlin (Sat starter) is making his third start of the season. Who did he replace in the rotation, and is it a good thing or a bad thing for the Indians that he is starting games right now? And when do you think we'll see Trevor Bauer in the rotation permanently?

JL: Tomlin took the place of Carlos Carrasco, who was in the rotation due in large part to his having been out of options, and management wanting to give him one more crack at being a starting pitcher. Carrasco has allowed 50 earned runs in 55 innings as a starter since the beginning of last season though, and I'm comfortable saying he doesn't belong in that role. Tomlin doesn't have a particularly high ceiling, but I think he can be a capable No. 4 or 5 starter. He pitched a Maddux in his last Triple-A start, which may have given him the edge over Bauer. I think management also still wants to see a little more from Bauer before bringing him back up. I suspect we'll see Trevor in Cleveland within the next month though, because his numbers this year are good, and the time to see what he can do in an extended stint at the MLB level has come.

7. Who do you think will represent the Indians in the All-Star Game? You can name more than one if you think that's what will happen, but also specify who has the best chance overall.

JL: Brantley is on pace to have 14 home runs and 60 RBI by the end of June. If he does that, he'll make the team. I think his power will fall off a bit though, and because RBI are so opportunity-driven, I think his pace will dip there as well. If the Indians only have one All-Star this year, the guy I think will win the honor is Corey Kluber, who's become the team's best pitcher. His 4-3 record and 3.38 ERA aren't especially flashy, but he's striking out 10 batters per nine innings, while walking only two, and giving up very few home runs. His FIP is 2.19, which is second-best in the American League. If he keeps pitching the way he has been, his BABIP will probably drop from its current .353, and his basic resume will look more like his advanced one.

8. There is another familiar face in Cleveland: former Oakland catcher George Kottaras. He played one game (May 4) and hit two home runs (giving him an 828 OPS+). Why isn't he playing more, as the backup for Yan Gomes?

JL: Santana is still serving as the team's backup catcher, which is nice, because it frees up a roster spot. Kottaras (who was only called up to help out while Gomes was on paternity leave) hasn't hit well in Triple-A, so his one game not withstanding, he isn't exactly knocking down the door. I hope he doesn't get called back up, because as things stand, he'd go down as one of the greatest one-game wonders in franchise history.

9. Have you found Nyjer Morgan endearing or annoying, aside from the .341 batting average?

JL: Endearing! (But he's now on the DL with a sprained knee.)

10. Cleveland's last two Cy Young winners were C.C. Sabathia and Cliff Lee. Do you seriously now have a pitcher named C.C. Lee? How many Cy Youngs will he win? And why isn't he left-handed?

Thank you, Jason, for participating in the Q&A!

The series starts this afternoon. First pitch is scheduled for 4:05 p.m., Gray vs. McAllister. Sonny is third in the league with a 2.17 ERA. Cleveland is currently the best last-place team in baseball, at 19-22. The A's are 13-6 on the road, which is second-best in the AL after Detroit. 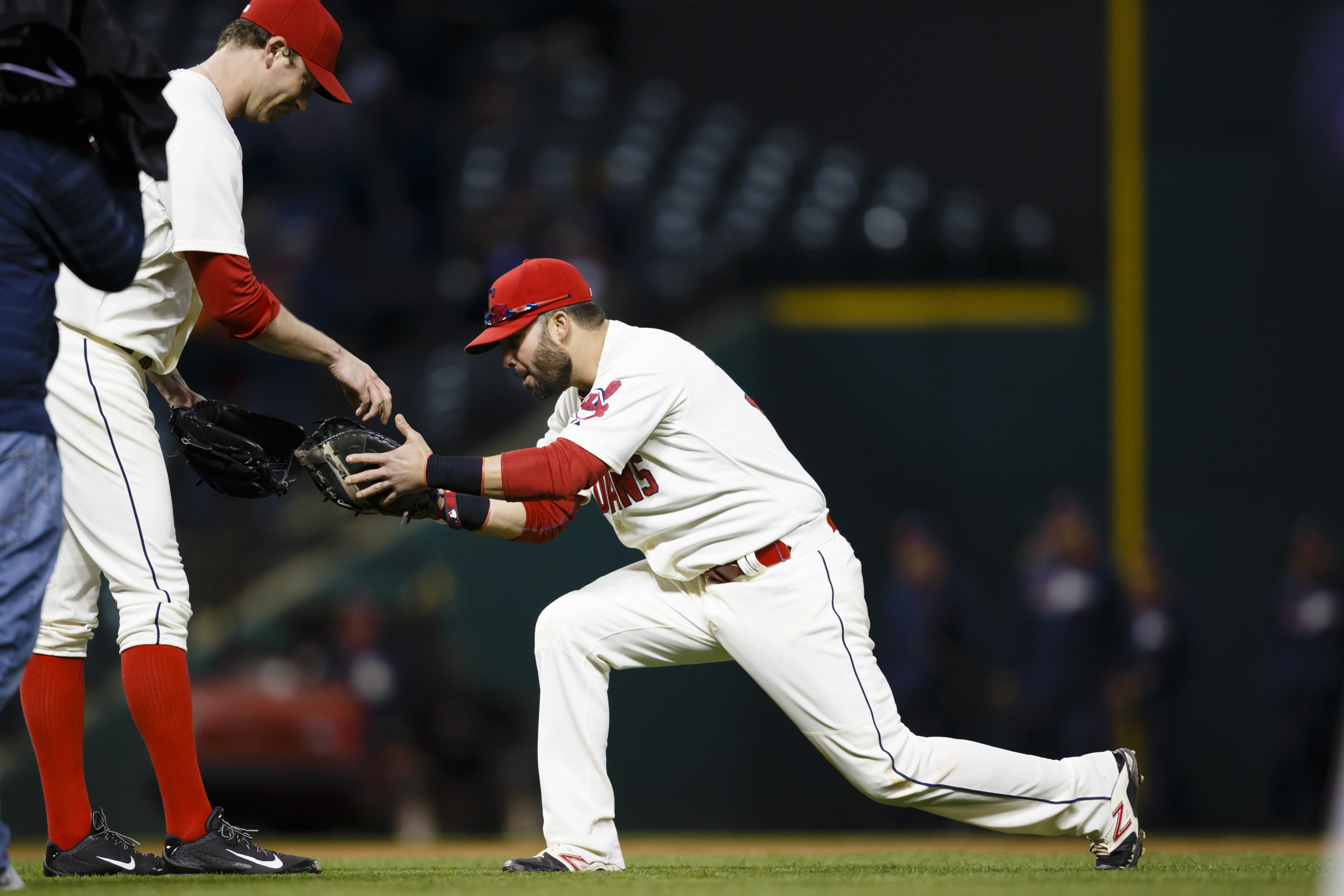