This week we examine Derek Norris and his hot start to 2014.

Derek Norris! What can I say? The bearded backstop has been on fire the early part of this season. Pegged by many (including myself here) as a breakout candidate, Norris has made good on those predictions with an incredible start. Take a look at his numbers so far in 2014.

Oh my. That is some kinda nice. What is really surprising is the AVG. ZiPS and Steamer predicted averages of .234 and .242, respectively. Keith Law of ESPN likewise guessed Norris may be a "low-average guy his whole career" but was bullish on increased power. My prediction was a little more conservative on power (I said 18 HR), but was thinking his AVG would creep up to .275. Regardless, let's take a look at how Norris is exceeding even the most lofty expectations.

Let's start with that sweet .352 AVG. Where did that come from? Well, part of that is Norris has really cut down on his strike-outs, down to 13%. His first two seasons in Oakland he fanned 28% and 23%, so this is really a drastic improvement. Part of this comes from improved plate discipline. Norris is swinging at pitches out of the strike zone a measly 17.7% of the time, while making contact with 94% of pitches swung at in the strike zone, both career bests.

Another contributor to the AVG is the beefy BAPIP. Before everyone cries regression, Norris' xBABIP is .332. So while his AVG may be a bit inflated, he is still looking at a .300+ AVG with the low strike-outs and preferable batted-ball profile.

Speaking of batted-balls, let's look at Norris' contributions to his wOBA.

We see Norris is really getting a large part of his production from above-average performance on ground balls. Either Norris is hitting his ground-balls harder than average (my guess) or he is getting a little fortunate on that front. This will be something to keep an eye on.

Of course, we have to talk about splits with Norris. In case you became an A's fan yesterday, Norris really struggled against RHP last year. Not the case this year as Norris has almost identical left/right splits.

Someone asked me in a thread if Norris' breakout could be the result in a swing change. So let's take a look. In my offseason review of Norris, I theorized that Norris may have overdone a preseason swing change. To review, before the 2013 season Norris went through an effort to "keep his front side from leaking out" and definitely overdid it. I showed by keeping his front side closed, Norris wasn't able to get the rear arm close to the body to handle inside pitching. Below is a still at contact on an inside pitch to illustrate what I am talking about. Norris' front side is closed at contact keeping his front elbow away from his body. 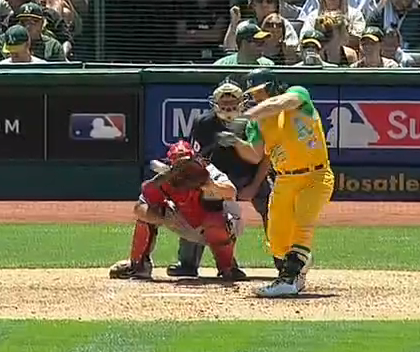 When we look at where Norris had success in 2013, we see mostly on pitches out over the plate. On the inside third, we see Norris only had success on pitches down, the pitches he had room to get the arms extended. Against RHP, we see Norris had very little success on pitches on the inner third. RHP were simply able to get in and jam him. Now we can look at Norris' swing in 2014. Here he is in Minnesota taking an inside pitch from a righty for a homerun. See how at contact his front side is opened up and allowed the rear arm to stay tight against the body. This was consistent in a dozen swings I reviewed of Norris in 2014.

Here is one of his two home runs against Gio Gonzalez. Classic. 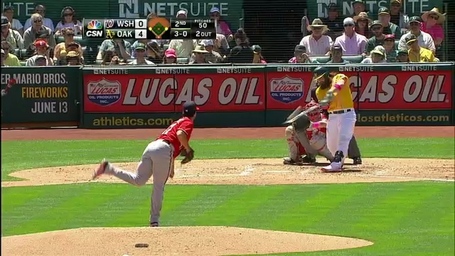 We can see that so far Norris is handling the pitches on the inside third a lot better. And even from righties. So what can we expect the rest of the way with Norris? If I was allowed to update my prediction, I would up them to .298/.388/.480. It is hard to imagine those stats staying that high on ground-balls (.350 wOBA is Mike Trout territory). I definitely didn't see the strike-outs dropping so much. I am still hanging on to the 18 HR over 162 game pace prediction. Norris just isn't hitting enough flyballs (35%) to really get the home run total up. Part of that is Norris' swing is pretty steep. He gets his hands pretty high at toe-touch then lumberjacks (haha) it with a pretty direct path. I would like to see him add a couple degrees of loft to his swing to turn a few more of those ground balls into line drives and get a little more carry on his flyballs.

But hey, I am not complaining. He is making me look pretty smart. Now if I can somehow get Sogard to my prediction of .260 AVG. (Yikes, may have had my Nerd Power goggles on for that one.)