With the A's and White Sox squaring off for three games, I asked Jim Margalus of South Side Sox a few questions about his favorite team. Here's what he had to say!

Stop me if you've heard this one: The Oakland Athletics are red-hot as they enter their series against the Chicago White Sox. They have won four straight games in which they allowed a total of four runs to their opponents. They just swept the Washington Nationals, a legitimate NL contender, and did so by smashing two of their top starting pitchers and breaking their star closer. Granted, the Nats were without their two best hitters (Bryce Harper and Ryan Zimmerman), but the domination was so thorough that it's difficult to say if their presence would have even mattered. The A's enter the week with the most wins in the American League (23) and the best run differential in baseball (plus-61). Ho hum.

The back of Oakland's rotation came through last week with 13 scoreless frames in two starts, and they will be tested once again against Chicago. Pomeranz draws his first pre-scheduled start, while Milone will be asked to follow up his eight-inning scoreless gem from Friday. There are red flags for Milone's start -- it's a day game, the White Sox have the best right-handed slugger in baseball so far this year (Jose Abreu, 13 homers), and there is generally a lot of right-handed power in their lineup. On the flip side, Adam Hazlett of South Side Sox told me in the corresponding podcast that the Pale Hose struggle against junk-balling lefties. Meanwhile, Danks has looked lost since 2012 and so far this year has a 4.93 with nearly as many walks as strikeouts; this series could turn into a home run derby between Abreu and the red-hot Derek Norris. More on White Sox starters Carroll and Rienzo in the Q&A.

1. Jose Abreu is taking the Majors by storm, following in the footsteps of fellow countrymen Yoenis Cespedes and Yasiel Puig. Is Abreu really this good, or do you think he will fall off once the league has had time to adjust to him and learn his weaknesses?

JM: The pitchers already have something of a book on Abreu, which is why he's struck out 42 times in 39 games. There have been times where it looks like he might start going into a weeks-long battle to adjust back, but then he'll crank out a homer and a double to beat back those concerns. Right now, it's an exaggerated version of the usual pitcher-hitter dynamic -- the pitcher knows how to get him out, but if he doesn't execute, his mistakes can go a long way.

2. Alexei Ramirez, Dayan Viciedo and Tyler Flowers are all off to blistering starts. Which ones will turn their early success into strong seasons, and which ones will come back to Earth because they're over their heads?

Alexei Ramirez takes 3-0 pitch ... out of the park

Alexei Ramirez takes 3-0 pitch ... out of the park

JM: In order, from flukiest to most legit -- Flowers, Ramirez, Viciedo. Flowers has been something of a BABIP god (the media has been calling him McSingles), and even he knows he's getting lucky. But he did make changes to make more contact (which is being rewarded), and he's supposed to have more power than he's shown, so maybe a drop in BA will coincide with an uptick in slugging. Ramirez is also getting some luck, but he's had more *good* plate appearances than usual, so it does seem like he could get back to providing average to above-average shortstop production. Viciedo is finally trusting his bat speed enough to ratchet down the effort. He can hit the ball hard to all fields, which makes him pretty much impossible to shift against.

3. What are your first impressions of Adam Eaton, the center fielder acquired from the Diamondbacks in the trade that cost you Hector Santiago? Would you make that trade again today?

JM: I would make that trade again. He definitely gives the Sox a much-needed pain in the ass at the top of the order, and his production has been excellent when he's in the lineup. Whether he can stay in the lineup for 140+ games a year is another question, because he throws his body around a lot, and often times unnecessarily.

4. Closer Addison Reed was also sent to Arizona in a separate deal. How has Matt Lindstrom done in his stead? And who is next in line if the 34-year-old should falter?

JM: Lindstrom has been shaky, but some of it's attributable to BABIP and defense. He gets grounders instead of strikeouts, so when the team botches a double play behind him, that really puts him in a tough spot. That said, the Sox basically followed the same premise that Oakland did with Jim Johnson, except they merely picked up an option instead of pulling off a trade that seemed weird. Lindstrom is there to pick up saves so Daniel Webb doesn't have to establish himself as a closer this far away from his arbitration years.

5. What is the status of Chris Sale, who hasn't started since April 17? How about outfielder Avisail Garcia and third baseman Conor Gillaspie?

JM: Sale's feeling good again, and he's supposed to make either one or two rehab starts before returning to the club. Garcia is done for the season after messing up his non-throwing shoulder diving for a ball, tearing a labrum and doing some bone damage, too. Gillaspie's back from a bone bruise in his hand, and seems no worse for the wear. 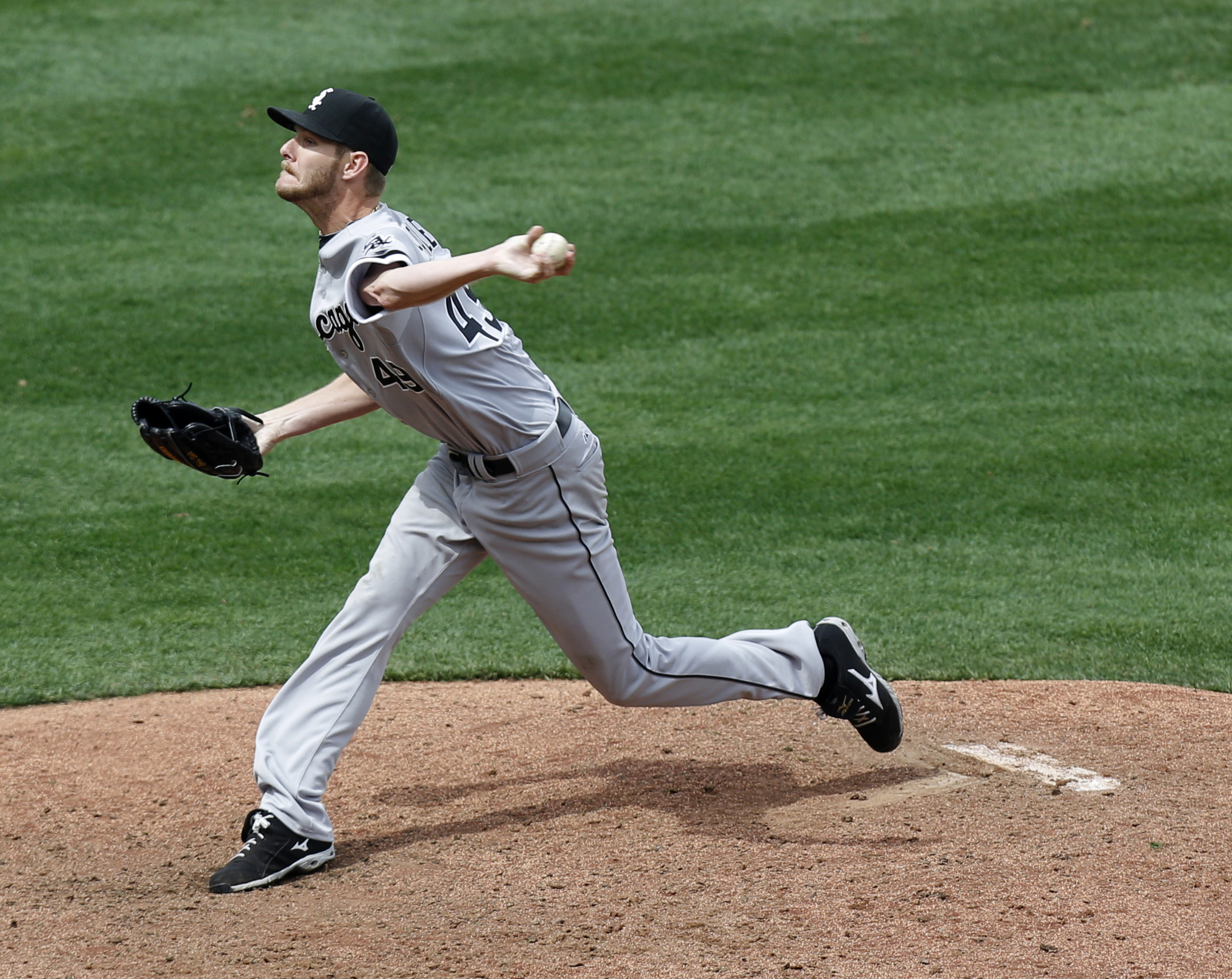 Mothers, don't let your babies grow up to be pitchers. Because this is freaking disgusting. -- Photo credit: Ed Zurga

6. Can you please give us a brief scouting report on right-handers Scott Carroll (Tue starter) and Andre Rienzo (Wed starter)? I've ... never heard of either of them.

JM: Scott Carroll is a terrific story (29-year-old rookie) and a funny guy. He's also a typical Triple-A sinkerballer, which means that any start in the big leagues is a dangerous one for his team. Rienzo is the first Brazilian pitcher in MLB history, a high-energy guy with a fastball, cutter and curveball. His command comes and goes, but while his best MLB future is probably in the bullpen, he's been able to keep his starting hopes alive.

7. John Danks looked to be putting together a solid career through age 26, but he's fallen apart the last three years while dealing with injuries. Will he return to his previous levels of success, or is he broken now that his average fastball velocity has dropped from 91 to 87?

JM: Danks looks better than he did last year, so that's a start. Capsule injuries are incredibly difficult to get past, so the fact that he pitched 138 innings last year -- even if they weren't good -- is an accomplishment of sorts. I think it's safe to say the old John Danks is gone, but the effectiveness of the new one won't really be determined until he gets through this season, because I don't think he can get much more oomph than what he has now.

8. Erik Johnson was the preseason No. 67 prospect in the minors according to Baseball Prospectus, and he's now made five MLB starts in each of the last two years. What are your first impressions of him?

JM: Johnson's lost some velocity for some reason -- anywhere from 2-6 mph, depending on whether minor-league guns can be trusted. When he has a 93 mph fastball and a slider that's almost a cutter, he looks like a sturdy mid-rotation option. But without his best heat, he looked timid on the mound, and that's why the Sox sent him down to the minors. He's been a lot better with the strike zone at Triple-A, but the velocity isn't back yet, so we'll see which one the Sox prioritize.

9. Can you please write me a haiku about Hawk Harrelson?

(Editor's note: Jim was a bit short on time last night and he didn't want to phone it in on the haiku without doing it justice. As a placeholder, I have prepared the following in his stead.)

Foghorn Leghorn hopes
that the good guys will prevail.
Put it on the booooooard!

The series starts in a couple hours. First pitch is scheduled for 7:05 p.m., Chavez vs. Danks. Derek Norris is in the lineup, so if you're near Oakland then you should stay indoors in case baseballs start falling from the sky.