In which the A's avoid an extended losing streak thanks to the back of the rotation, and Derek Norris declares war on horsehide.

The 2014 Oakland Athletics are displaying a characteristic that past A's teams have not always shared. The team often tends to go on an early-season losing streak, and then they have to climb out of the hole they've dug when they heat up later in the summer. It's not too late for this to happen, but so far the team is showing a sense of resilience that I'm not used to seeing in May. Just when it seems like they're falling apart and getting injured and gearing up to drop eight straight, they come back strong, halt the downward spiral and reestablish themselves as a powerhouse.

So it went this week. The A's started off with four games in three days against the Seattle Mariners. They dropped the first two in fairly pathetic fashion, as Scott Kazmir and Jesse Chavez were defeated by Chris Young and Roenis Elias. Then, Dan Straily beat Felix Hernandez in the first game of the doubleheader, but the bullpen coughed up the lead and the A's lost in extra innings. That one hurt the most; it's not often that you knock Felix out of the game after taking the lead against him, and it was especially painful to give that game back. They also lost both Coco Crisp and Ryan Cook to injuries in that first game on Wednesday, and the smart money says that Cook isn't coming back this year (though that is purely my speculation at this point).

But then, Oakland rallied. Drew Pomeranz salvaged the second game of the double-dip to avoid being swept at home, and then the A's absolutely annihilated the Washington Nationals en route to a three-game sweep. Things were looking dire midday Wednesday, but the A's managed to hold on for a 4-3 week. And for those of us who lament the games in which Oakland's bullpen turns wins into losses, keep in mind that the A's snatched a victory from Washington's then-flawless closer, Rafael Soriano. Blown saves are a two-way street, and yes, Oakland is on the winning side of them sometimes.

At the end of the week, the A's still found themselves with the most wins in the American League (23-15), although the Tigers still have the best winning percentage at 21-12. After being briefly passed by Colorado, Oakland once again has the best run differential in baseball at plus-61 (the Rockies are at plus-55; no one else is better than plus-40). The A's are now tied for third in MLB in scoring (187 runs, tied with Toronto, though the Angels are one run behind in two fewer games), and are still second in baseball in ERA (2.91, behind Atlanta). Here's a look at the main story lines from the Week 6.

The back of the starting rotation

After Wednesday's first game, the A's were 2-10 in contests started by Dan Straily and Tommy Milone, the fourth and fifth starters in the rotation. Both pitchers were struggling, and neither was doing much to give his team a chance to win.

But then, Drew Pomeranz stepped in and tossed five scoreless frames Wednesday evening. Milone followed with eight shutout innings against the Nats on Friday. The A's won both games, and suddenly the rotation looks like it's five-deep again. Instead of "Chavez, Kazmir, Gray, and hope for an off day," there is hope that the team will have a chance to win every time they take the field. It's up to Pom and Milone to back up those eye-opening performances, and they will still put up their share of poor starts, but for now it looks like one of the glaring flaws on the roster might not be as big of a weakness as we'd feared.

Derek Norris will eat your face

If you see Norris walking down the street, my advice would be to get out of the way lest you get run over. The D-No-saur. The Lumberjack. The Hottest Hitter In Baseball Other Than Troy Tulowitzki. Call him what you will, just don't call a fastball down the middle on 3-0.

Norris went 7-for-16 with two walks and only one strikeout, and he more or less beat Gio Gonzalez on his own by blasting a pair of three-run homers in the first two innings. This was especially cool since Norris was part of the package that Washington sent to Oakland in exchange for Gio two years ago.

Norris is now hitting .385/.467/.603 on the season with 12 walks and 10 strikeouts. Seriously, don't get too close to him. He's dangerous. If you do manage to get within earshot, though, he gives fantastic advice for young players.

John Jaso is proving his worth

The A's gave up a lot to get John Jaso. There was blue-chip pitching prospect A.J. Cole, who has figured out Double-A at age 22. There was lefty reliever Ian Krol, who has already notched a 3.52 ERA in 47 MLB games despite just turning 23 on Friday. And there was Blake Treinen, who has already cracked the bigs to make a start and three relief appearances with excellent results.

Jaso was worth it, though, and he's finally showing us why. It was tough to get excited about him last year, since he was only just starting to heat up in June and July before losing the final two months (and the playoffs) to a concussion. But he's putting things together this year, and he went 6-for-15 last week with two homers and a double. He was at his best on Saturday, when he essentially put the team on his back and willed them to a come-from-behind victory. He homered for the A's first run (and one of only two hits off starter Tanner Roark), he started the game-tying rally in the ninth with a leadoff single off of Soriano, and he launched the walk-off double off Drew Storen to win it in the 10th.

Jaso's season line is now .288/.383/.463 (142 OPS+). His strikeout-to-walk rate is still out-of-character, but his walks are slowly catching up to his K's. That on-base percentage is looking great, and he's providing a bit of power to boot -- he's already matched the three homers he hit all of last year. With Jaso and Norris behind the plate, it's only a little bit of a stretch to state that the best hitter in Oakland's lineup on any given day is its catcher.

What would Doo do? Strike 'em out.

Sean Doolittle has had his struggles this year. They seem to be over. He faced 15 batters in three appearances last week, and he struck out eight of them while allowing only one hit. Retiring 14 of 15 batters and punching out over half of them is a great way to get back on your feet. His ERA is down to 3.79, and he now has 24 strikeouts this year without allowing a walk. Once again: 24 strikeouts, zero walks. Doolittle is still the future closer.

In related news, relievers Fernando Rodriguez and Joe Savery made their Oakland debuts. They each tossed a scoreless inning and allowed one hit apiece.

Coco gets a boo-boo

This was really scary to see in person.

Coco strained his neck making that catch at the wall, but it looked so much worse from the stands without any broadcasters to give updates. Seeing him stand up and walk off under his own power was a huge relief, both professionally and personally. You hate to see a star player go down just as you hate to see a fellow human get hurt. However, he hasn't yet hit the DL, so there is hope that this will be a short-term absence. Besides, he seemed just fine when I ran into him in downtown Walnut Creek Friday night: 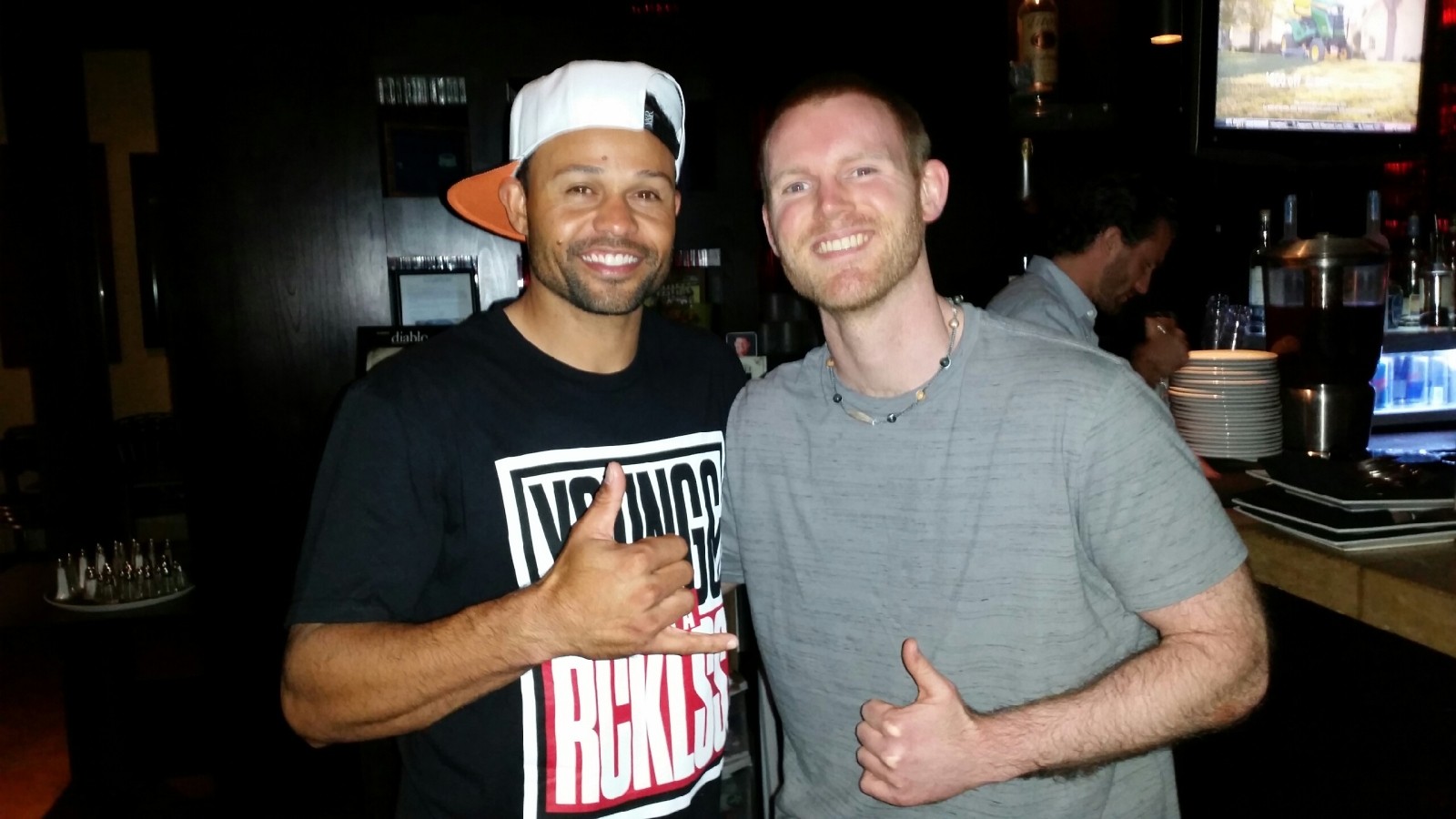 Note that I'm sitting down in this picture because I'm too tall to be alive.

Putting the "D" in "Donaldson"

Josh Donaldson is still making some errors, as he committed his seventh miscue last week and is tied for fourth among all MLB players in that category (and behind only Pittsburgh's Pedro Alvarez among third baseman). But don't worry, errors are a stupid metric and Donaldson is still awesome.

Jesse Chavez showed off his leather too, as well as his cat-like, life-saving reflexes. Flashes of Brandon McCarthy here.

He's a wizard in the field, but in the dugout he is just a cheap trickster magician. And a hilarious one.

I'm just saying, I would hire him to perform tricks at a kid's birthday party (magic tricks, you perv).

Postscript: I also met Daric Barton on Friday. By popular demand, here's the photo! See if you can tell who's who. 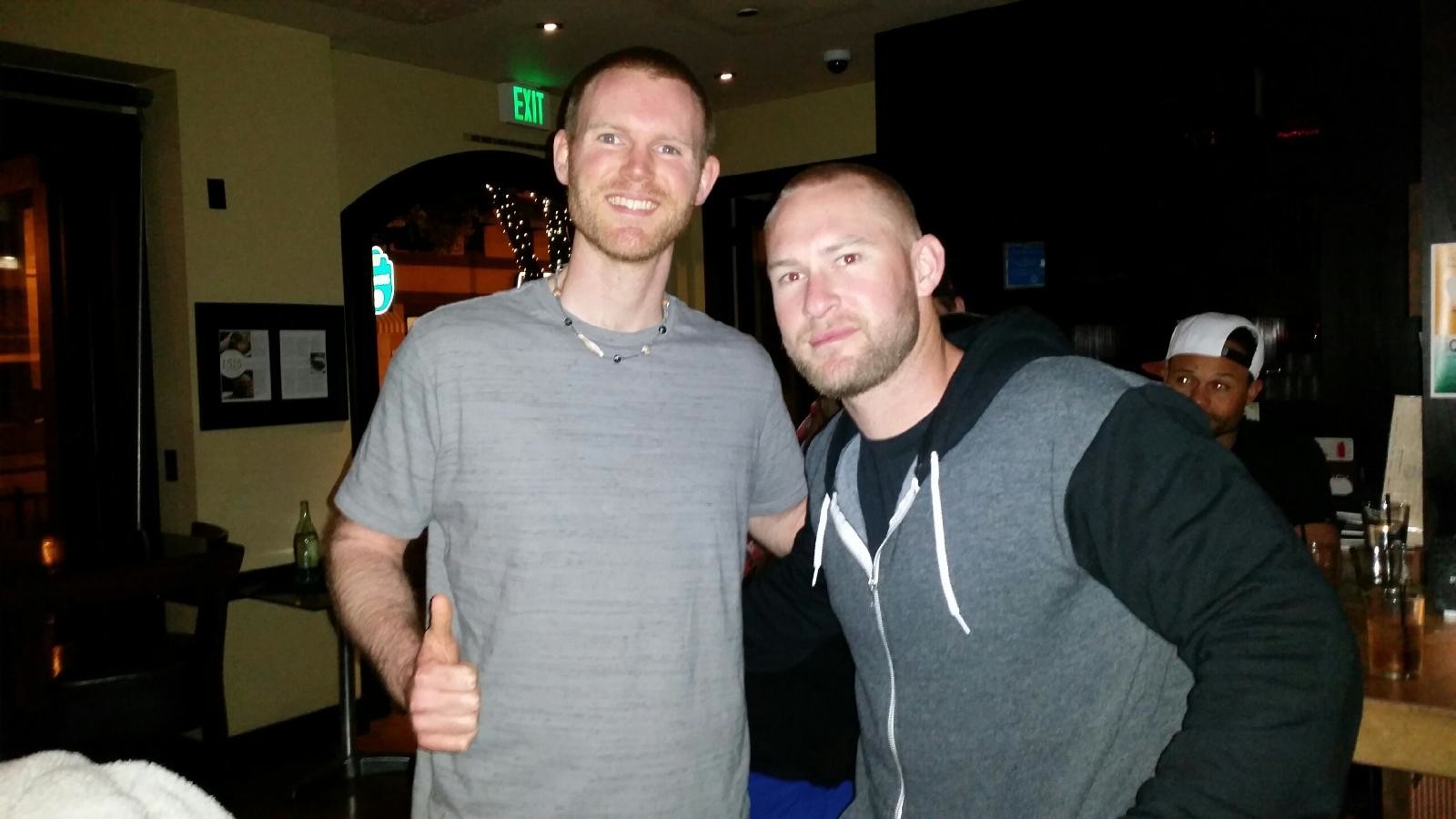 Yes, the thumbs-up is kind of a go-to for me in pictures, apparently.

They were both very friendly and out-going, and were perfectly happy to play along with the crowd of fans that was slowly forming. Kudos to both guys for making some fans happy.