The A's entered their April 28, 2007 contest against Tampa Bay on a 3-game losing streak, having scored more than 5 runs just 3 times in their 23 games to that point. Despite that, they were 11-12, and only one game back in the AL West.

In 2007, Saturday afternoons were an exclusive window for the Fox Game of the Week, and that particular Saturday Fox elected to show a national broadcast of, wait for it, the Boston Red Sox against the New York Yankees. With the game blacked out on mlb.tv and Gameday still in primitive form, your April 28, 2007 game thread resembled something like this:

The 2007 Oakland Athletics had a new manager, Bob Geren. Everyone had high hopes that the team would advance from their somewhat surprising run to the 2006 postseason, including an appearance in the ALCS against the Detroit Tigers. 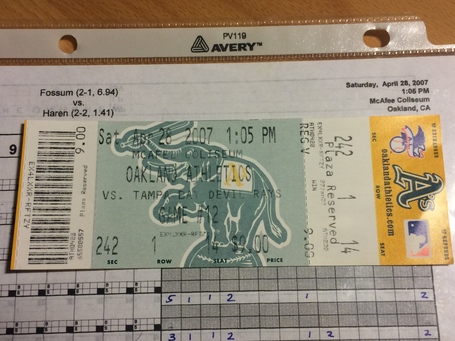 The Devil Rays were in their last season under that moniker, switching to the simple and less evil "Rays" in 2008. Their switch away from the Dark Side obviously is what led them to their American League Championship in '08.

The A's won this game 12 to 5, with Dan Haren going 7⅓ innings and allowing 3 runs, 2 earned. The Athletics put up six in the first, including a 3-run home run from Travis Buck. Eric Chavez also had a 3-run home run in the 7th inning.

What was most notable about this game was that it was a feast in an April that had been mostly offensive famine. That Oakland was 11-12 at the start of this contest was miraculous, and possible only through excellent pitching. Rather than a blow-by-blow, I'm just going to leave some select player notes for where these players ended up. Monkeyball had your recap. 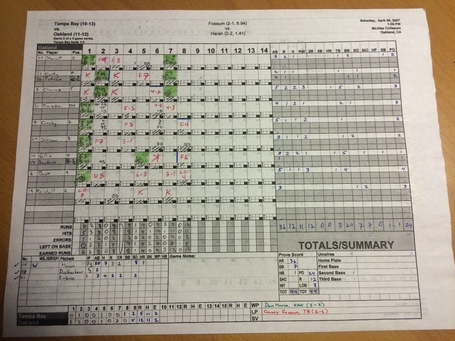 Think back. How were you feeling at the start of the 2007 season?