A roundup of the first week of the A's season, including notes about Yoenis Cespedes, Josh Donaldson, Sam Fuld and Eric Sogard.

The 2014 baseball season was a lot of fun. There were zany plays, diving catches, multiple rainouts, walk-off home runs, and pitching performances ranging from dominant to tragic. And the A's won the last game of the season! It was Game 7 against the Minnesota Twins ...

The Odd Man Out

The Odd Man Out

Wait, that doesn't sound right. The Twins are in the AL, so that couldn't have been the World Series. Oh, the year's not over? It's only been one week? Man, so much has happened that it felt like an entire season already. I guess I'm still adjusting to baseball being back.

With the first of 26 weeks in the books, let's take a look at the major stories and developments out of Oakland over the first seven games.

DISCLAIMER: Every statistic I use here is from an absurdly small sample and is meant only to report events and to identify trends to watch. There are no meaningful long-term conclusions to be drawn from one week of baseball stats.

DISCLAIMER #2: There are a lot of videos embedded in this post.

When your lineup is made up of relative unknowns, it's easy to doubt it every April. Will they all be good again, or will they turn out to be flukes? This group of guys led MLB in scoring in the second half of 2012, and then placed fourth overall in 2013, so we know that they've been good for a year and a half.

Well, you can stop worrying, because the hitters are doing just fine. Brandon Moss is already mashing. Jed Lowrie is getting on base like crazy, he already hit a homer off of Felix, and he nearly hit another in Minnesota. Coco Crisp is getting on base too, and he hit a walk-off home run against the Mariners on Thursday (which I was fortunate enough to see in person) for Oakland's first pie of the season. Even better, the role players are chipping in as well -- Eric Sogard, Alberto Callaspo and Derek Norris are all off to hot starts in partial playing time. Yep, the offense is humming.

Of course, there are two guys in particular whom I haven't mentioned yet, and who really make this lineup go ...

Yoenis Cespedes is not broken

La Potencia had a rough spring. He was working on his swing, it didn't go well, and everyone was good and worried about him. Would he recover in time to contribute in April? Could he even match his underwhelming numbers from 2013?

You'll have to ask EBHI about Cespedes' swing mechanics. I can't speak to that. But I can speak to the results. He's already ripped four extra-base hits, including an opposite-field home run, so the power and the screaming line drives are still there. His average is low so far, but he's managed to draw three walks and strike out only four times in 30 plate appearances. That's a big deal.

As I understand it, the change that Cespedes was trying to make was to shorten his swing and improve his contact rate while sacrificing as little power as possible. If that's the case, then this first week has to be considered a massive success. You can't see the improvement in his batting average yet, but you can see it in his increased percentage of swings which make contact and in his decreased strikeout rate. For his career, Cespedes has struck out in around 21 percent of his plate appearances. He's at 13 percent so far in 2014. There's a long way to go before that transforms from a one-week sample into a sustained skill, but it's an encouraging development and something to keep an eye on.

Josh Donaldson will be fine, probably

The Bringer of Rain had the biggest target on his back entering the season. When you come out of absolutely nowhere, people tend to expect that you will return there rather quickly. And the folks who predicted that are probably tickled pink by his .161/.188/.194 line to open the campaign, basking in their smug sense of satisfaction.

It's a mirage, though. Donaldson is killing the ball. He's already hit a non-homer off the tippy-top of a 400-foot center field fence hours after a rainstorm, hit a couple more warning track shots, and had a couple of sharp liners go right at guys. We already know he's a slow starter who struggles until he's got a handful of games under his belt, whether that be the first week of the season, the first week after the All-Star Break, or the first playoff series after an inexplicable and unnecessary week-long break. Fortunately, the baseball gods are already starting to balance things out, granting him a couple of bloop singles in the last two games.

The only thing that worries me about Donaldson is his one walk to nine strikeouts. But that's something that I think will get washed out in a larger sample. We still have to assume that he'll fall back at least a little from last year, but he's not as lost as his current stats make it look.

The A's pitching staff has made seven starts so far.

That one outlier, marked with the asterisk, was an emergency spot start by Josh Lindblom, who is not actually in the rotation or on the team. He had to come up to start the back-end of a double-header. Now look at the rest of those stat lines, and that is about what you should expect out of the rotation this year. Basically, 2012 A.J. Griffin starting every day. Six innings, a run or two, quality start. That is how this team is designed. Get through six with a lead (or a surmountable deficit), hand it off to the bullpen. It's working beautifully so far, at least from the starter's standpoint.

The bullpen is lights-out

Three stat lines for you:

The point here is not to pick on Johnson. He had a couple of bad games. It happens to all pitchers. And his most recent game was good! No, a brief rough patch is fine and it only looks bad because it came in the first two games of his season.

The point here is to show you that the bullpen has been exactly the strength it was supposed to be. Remove Johnson, and the unit has a 0.86 ERA so far. They're throwing over three innings per game, they haven't given up a dinger yet, and they're just not allowing runs. That's how you win with a six-inning-per-start rotation. 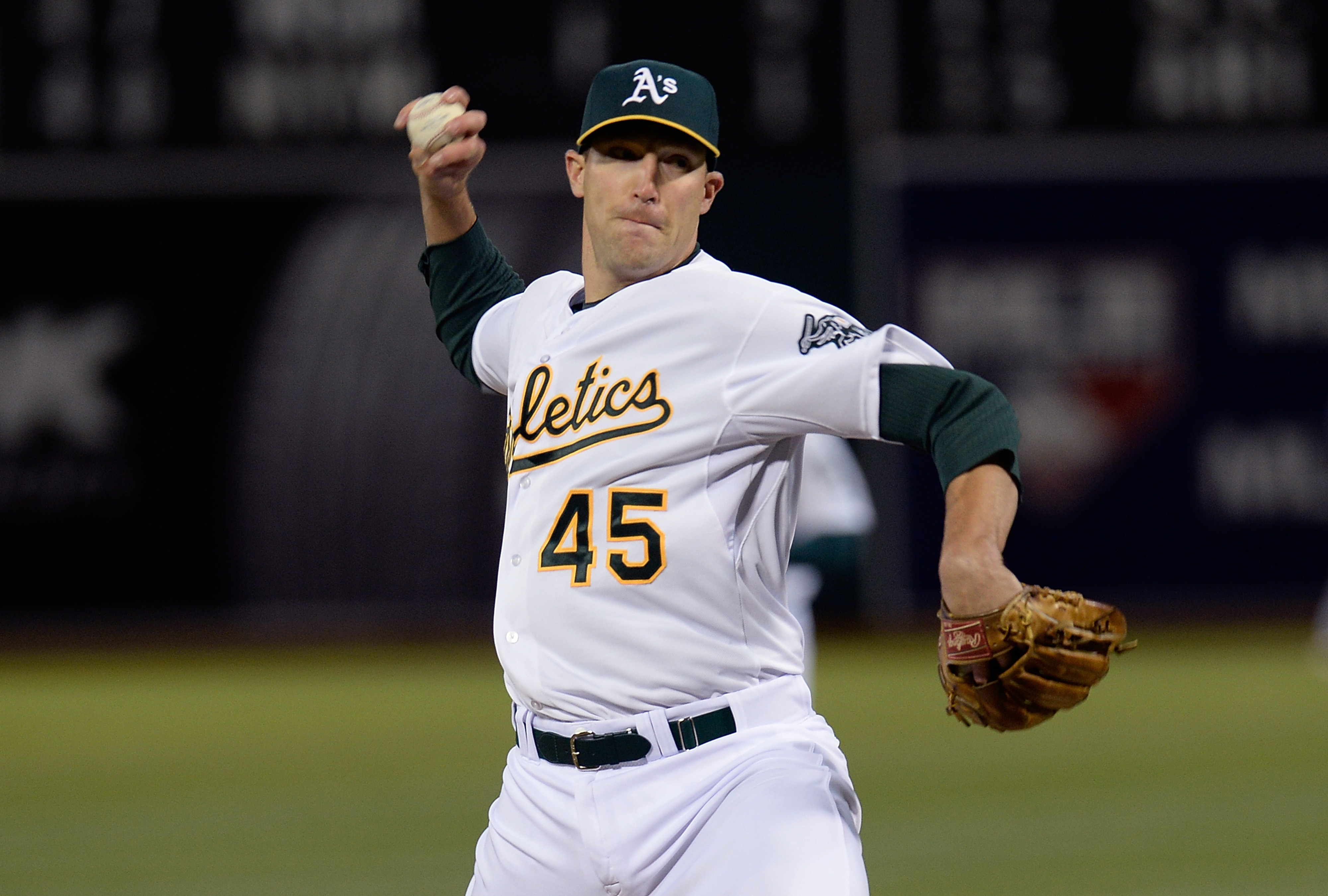 Our dog escaped out the front door last week because Jim Johnson didn't close it.

Sam Fuld is a Major Leaguer

There have been questions about whether or not Fuld belongs in the bigs. Are his speed and defense enough to overcome his lack of hitting ability? Yes. Yes they are.

I'm not saying he's a star, or even a starter. He's a 25th man. But he's a good 25th man. The dude can play defense at a near-Reddick level. Yeah, there's the diving catch he made on Sunday, and the laser throw to third to nail a runner in the same game. But there were two or three balls on Thursday that I just assumed would fall for hits, and his speed allowed him to track them down and make them look easy. Note that he played two different positions on Thursday (LF) and Sunday (RF). Then add in the near inside-the-park homer -- granted, it was mostly a defensive miscue by Seattle, but it was exciting as hell and showed his aggressive style.

Fuld is a human highlight reel. How often can you describe your 25th man, your fourth/fifth outfielder, using that term? It's April 8 and there are so many Fuld highlights on MLB's website that I don't even know which one to include here. I prefer my role players to have elite skills, because I believe it's easier to add up a bunch of elite skills and come up with a winner than to do so with a group of all-around mediocre players who aren't particularly good at any one thing. Fuld has elite skills, in the field and with his legs. Let's go with a video of him showing off both.

The A's are looking at a roster crunch when Craig Gentry returns from the DL this week. Every so often, someone floats the idea of sending down Sogard for the short-term since he has minor league options and the team has other second base options. That idea always intrigues me, but I just can't quite get behind it. Not while he's doing stuff like this:

Sogard has started five games at second base, and MLB.com has highlighted a defensive play he made in three of those games. He's made several more that didn't get their own videos. The point is that these plays are not just individual anecdotal occurrences. Every day he goes out there, he's making crazy sliding stops and diving catches and off-balance throws that are strong and accurate. Oh, and he's hitting a bit too, and has only struck out once so far. Next time you watch him, pretend that Mark Ellis is playing second and see if you notice a difference. (And I don't throw that name around lightly.)

This play was so bizarre that nobody was even really sure how to call it. Does the base count as the ground? Or was it a flyout when Gray caught it? Well, he got the out and you will never see this happen again, so don't think too hard about it. All that really matters is that, where the Seattle Seahawks are famous for their 12th man, the A's got an assist from their 10th man on defense, whose name is First Base. Who needs Daric Barton when the base itself does all the fielding for you?

The A's went 4-3 in their first seven games, putting them one off of the MLB lead in wins (shared by the Dodgers, Giants, and Marlins, just like we all expected). Week 2 begins with a pair of games against the Twins, followed by a three-game set in Seattle. Enjoy the off-night, and get ready for more afternoon morning baseball on Wednesday!