My advice: Have a plan.

Sunday offered a relatively rare opportunity to see the A's in the afternoon and the Golden State Warriors in the evening, all in the wonderful fun zone known as the O.Co Coliseum Complex.  Like many A's/Warriors fans, I took full advantage.

I already had tickets for both games from season ticket plans, and didn't realize they were the same day until Friday. Thus I found myself tasked with the glorious work of sitting around and watching sports for a day, with the bonus that minimal walking and no driving was required.

Upon arriving at the Coliseum, I realized this was my third multi-sport doubleheader in six months. Last September I saw the Pirates play the Reds and the Steelers play the Bears in Pittsburgh, and this spring I saw the Giants play the DBacks and then the Phoenix Suns play the Atlanta Hawks in Arizona. I know, it's a little obsessive.

The Pittsburgh doubleheader was also unplanned. My friend offered me a free ticket to the Steelers game when I was at the Pirates game. Seeing as how I had no plan for the evening and no place to stay that worked out great. But it was chilly, and the game started at like 9 pm (the east coast stuff is just hard to get used to), and you have to walk between stadiums.  Also the Buccos got blown out in a game that was critical for their postseason prospects and the Steelers just plain sucked.  So it was a lot of time between games, a late night, and two lousy losses. The "roughest" outcome, but it was still better than a day at the office so who can complain?  That's the beauty of the multi-sport doubleheader; you really can't have a bad day.

This Sunday O.Co definitely was giving off the west coast vibe in all its glory - lazy, warm, sunny, and laid back. Things were looking promising.

The first plan of action upon embarking on this quest is figuring out how you'll break the news to your spouse that you will not be working on your taxes or helping with the million things that need to be done around the house and you will be wasting tons of time and money on sports; this was solved by inviting my wife to join for the A's game. I know her weakness; baseball day games. When she realized it was a 1 pm start, she was in for the first leg of the doubleheader. My sister came to the A's game as well. Now I've turned wasting an entire day drinking and watching live sports into some quality family time (well at least for part of it). Yes!

(I realize that this is not always an option, sometimes you just want to roll with your buds. In that case I would just make sure to ignore your phone and deal with any consequences later.)

In general, when you go into these situations, you realize that this presents a valid reason to drink all day.  I don't drink that much, really, but special occasions are special occasions. And the multi-sport double header is one of the specialest of occasions. The pitfalls of this are self-evident.  Drink too little and you'll just want to go to sleep.  Drink too much, and you are in severe danger of spending time in a bathroom you do not want to be in.  If you're not drinking at all, well, you will need to find another way to power through all that sitting and watching. Those games ain't gonna watch themselves, you know.

It's hard not to overdo it.  In the aforementioned Arizona doubleheader, my friends and I started with pregame margaritas, headed over to Scottsdale stadium and took in some more brews.  What I didn't realize was my boy DK (name withheld for embarrassment reasons) hit the Jim Beam hard in the hotel room.  After the Giants game we were doing pretty well. We then made our way over to downtown Phoenix, bought tickets from a scalper and wandered into the Suns game.  DK decided to hit the Beam again pretty hard before going in.  Of course this is after ample libations.  At the game he asks me if I want a beer. I say no, I'm good. He buys us each 2 of them. You can see where this is going.

In the exciting 4th quarter, I was feeling good, cheering on the Suns and heckling Elton Brand, but DK was hugging the porcelain god in a US Airways Arena bathroom stall.  You gotta pace yourself through these things. 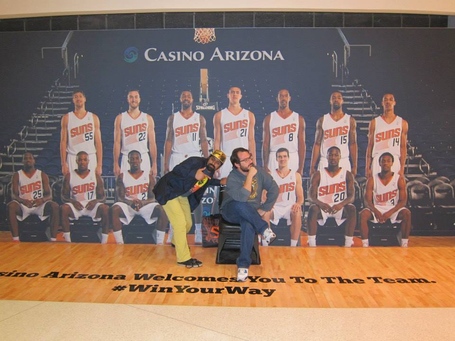 DK decided he needed to redeem himself and joined me on Sunday, much more successfully.

Of course Sunday started out with some brews in the parking lot and then entering in around the 2nd inning. I missed the Barton error, and thus was fully enjoying the day out in the gorgeous weather. When Moss hit the 3-run bomb, the stadium erupted and I knew it would be an A's win. I realized I was starting to fade; the hot sun, beer, and waking up at 6 am to help with a community service project (how did I forget to drink coffee this morning?) were combining forces.  I decided to get some more beer, because that usually solves the problem. Also that includes the added bonus of getting out of the sun.

I was asked to bring back some ice cream.  On a warm little league day, this is apparently harder than it seems. Sure, the Dreyer's stand was a couple of sections over.  Of course with the beautiful weather the line was about 50-60 people and there were just two kids working there. Forget about that. We wander to stand after stand, only to watch someone buy the last ice cream sandwich. Gah!

Finally we found success at the stand next to the West Side Club. 3 neopolitan ice cream sandwiches, and we were in business. File that away so you don't make the same mistake we did.

Getting out of the sun and getting the beer and ice cream rejuvenated us.  After the Cespedes shot we knew we had a Johnson-proof lead, and we were good to go.

I wore my Warriors jersey and A's hat to the game, figured that would be the easiest thing to rock for all day.  As we walked around on the ice cream quest it started a lot of conversations.  Apparently there were hundreds who had the same dual action plan.  One girl kept screaming "WARRIORS!!! YEAH GO WARRIORS!!!" at the top of her lungs. Not sure how to react to that. I have a feeling she may have crashed at halftime of the Dubs game. Lots of friendly nods.

After the game we head into the parking lot for the 2nd pregame of the day.  Plenty of tailgates, some were A's post-game, but a few were clearly between-game tailgates.  Perfect way to pass the 2 hours between events, and a beautiful thing about the O.Co doubleheader. Unlike other places, where you have to walk long distances, or drive, in Oakland you don't have to leave at all.  It's really the perfect setup.

We go in early to the Dubs game to check out food options.  We even have the sideline club pass to get into some better food spots. Unfortunately, everything sucks. The food options are terrible and overpriced. Should have eaten at the O.Co (maybe the first and last time anyone will utter those words).  Oh well, I pick up a red bull to try and rally for game 2, wolf down some nasty grub and head to the seats.  The Warriors-Jazz game turned out, predictably, to be a laugher.  The highlight was running into the girl I went to senior prom with (15 years ago) and we hung out and watched the second half together.  That was fun catching up. I did end up falling asleep for a minute in the 4th quarter, but it was a ~30 point lead and I had a long day of sitting around watching sports. This is hard work, you know.

The early Sunday warriors start was perfect, out and home and fast asleep by 9:30.  A well earned rest.

All in all, I would recommend the multisport doubleheader to anyone who has a day to waste and a few bucks for tickets and food.  Even if you don't care about the teams, it's really something that's worth treating yourself to. Far better than watching two games on TV.

One of these days I will try to pull off the A's-Giants same day doubleheader...who's with me?

If you have any awesome multi-sport doubleheader experiences, please share them here!