The A's travel to Target Field, looking to spoil the Twins' home opener.

Share All sharing options for: Game Thread #7: A's at Twins

Welcome everyone to another edition of A's baseball! The A's travel to Minneapolis for a 3 game set against the Twins. Despite delaying their home opener as long as possible, the weather looks to be in the 40's to 50's for most of the game. Prepare for Ray Fosse wistfully remembering the climate-controlled Metrodome.

I always seem to expect good things at Target Field ever since the post-ASB series where the A's hit 9 HRs in 3 games, with Cespedes and Carter going back-to-back in game 3 for the sweep. That series put the A's above .500 for good and of course they never looked back all the way to the AL West title. Good times. Side note, one of the recaps from the third game of that series mentions the Twins crowd booing Brian Duensing after giving up his 3rd or 4th HR. Gosh, even in friendly Minnesota they booed their own!

Both teams come into today's game with a record of 3-3, with the Twins having scored 17 runs over the past two games to take two of three from the Indians.

The pitching matchup definitely favors the A's today, with the Twins rolling with journeyman Kevin Correia and the A's sending Scott Kazmir to the hill. Kazmir dominated the Twinkies in 2013, facing them five times with the Indians, going 3-0 with a minuscule 1.45 ERA. I got a good feeling about this one.

Anyway, despite offseason rumors that he might quit or get fired, Ron Gardenhire is back for his 13th season as Twins manager. He got his 1,000th win yesterday, becoming the 10th manager in MLB history to reach 1,000 wins with the same team. Kudos to him. The players doused him with champagne and made a pretty funny t-shirt for the occasion: 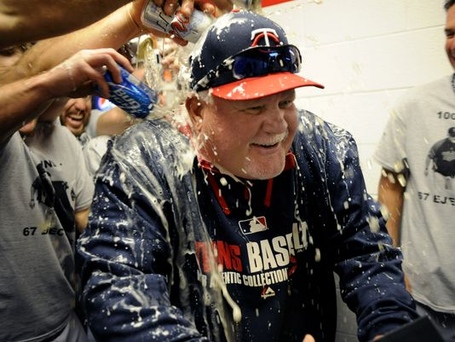 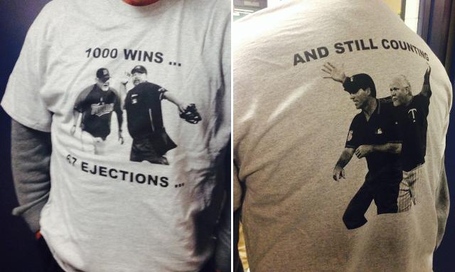 The A's have an off day tomorrow, which, after dual rainout week is cramping my style. The Twins really are not properly executing the free parking Tuesday promotion. In any case, it would be great to get a win so the off day is slightly more tolerable.

Here are the lineups. Fuld is starting in place of Coco, who got a cortisone shot to control inflammation in his wrist. Norris and Callaspo get starts against a RHP. Cespedes is in the lineup at LF, apparently it's just a bruise on his heel. Also - KURT SUZUKI REUNION TIME! Let's Go Oakland!