What does Yoenis Cespedes need to work on to regain his 2012 form? Let's find out.

There has been a lot of talk about Yoenis Cespedes lately. In case you missed it, he kinda under-performed last year and looked terrible in Spring Training. So far this season Cespedes has shown signs of life (a couple singles, a "double," a triple, and two walks!), but there are serious concerns about him returning to 2012 form. Is it his swing, plate discipline, pitch recognition, his inability to throw the ball in from the outfield without counting the stitches? I thought I would try to find out. Let's compare his successful 2012 to his letdown 2013 to see what he should be doing in 2014. Hopefully you packed a lunch because this one is going to be in depth. (Click on any of the charts to blow them up.)

Let's start with pitch recognition. This one is pretty hard to quantify. But let's look at how Cespedes handled pitches in 2012.

Hmm. That looks pretty darn good. It doesn't look like Cespedes had any trouble picking up any pitches in 2012. I guess it is possible he lost his pitch recognition abilities over the winter of 2012, but just for the purposes of the rest of this article let's assume that didn't happen.

Did Cespedes simply start swinging at pitches out of the zone? Let's take a look at the stats.

Now to make some sense of this. Did Cespedes start swinging at more pitches out of the strike zone? No. Although he did make more contact on those out-of-zone pitches. We will have to look later to see if that is good or bad. Cespedes swung at a higher percentage of pitches in the zone, but did make less contact on those swings. This we can guess is bad. Check out strike-outs looking (L/SO). The number is nearly identical in 2013 to 2012. Cespedes didn't start getting frozen on knee-bucklers in 2013. But his strike-out swinging percentage (S/SO) went way up (he struck-out swinging 33 more times) in 2013. Look at his foul ball per strikes seen % (F/Str). It is way up in 2013. But this could be seen as good or bad. It could be interpreted as Cespedes battled more fouling off pitches, or it could be seen as him having a hard time putting the ball in play.

Still, these numbers don't tell us much on their own because there is no context (the count, did the contact result in a hit, foul, or out, etc.). That's why these stats aren't great predictors of performance.

Let's take a look at how pitchers pitch Cespedes. Here is a heat map for the pitches Cespedes saw in 2012. 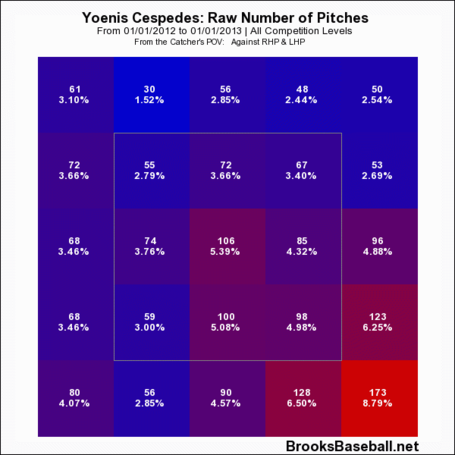 The chart shows that pitchers really tried to stay down to down and away. How did pitchers pitch Cespedes in 2013? 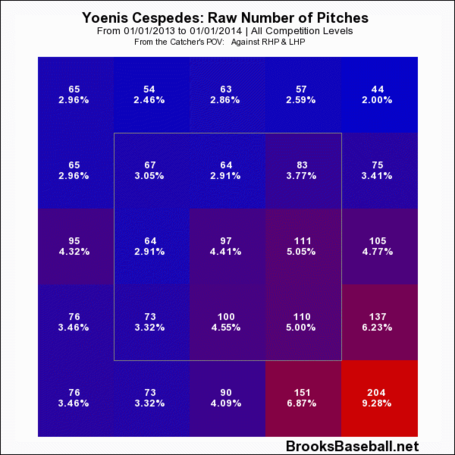 How about the pitches Cespedes swung at? 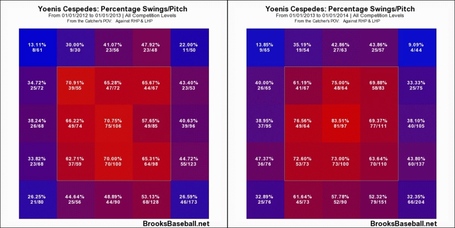 We see Cespedes shifted some of his out-of-zone swings from up and away to pitches down out of the zone - pitchers' pitches. Still, there isn't much context here. We don't know if Cespedes is a great low ball hitter. All of those swings could have been home run swings. How about the pitches Cespedes swung and missed? 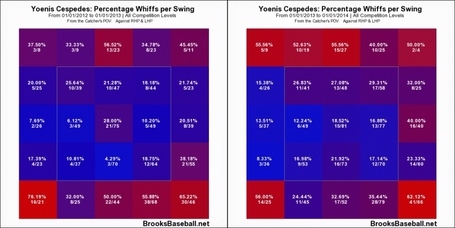 Very interesting. Cespedes was about the same making contact on pitches down, surprisingly maybe even a little better. But Cespedes really swung through a lot of high pitches in 2013. Now let's look at the fastballs swung at and missed. 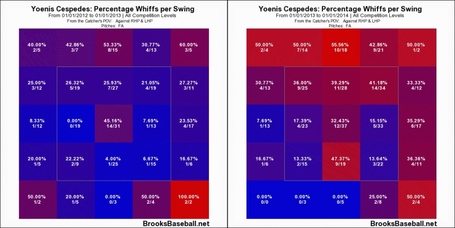 Oh yeah. There it is. Trouble with the high cheddar.

Yikes. Those numbers are really down. Look at the strike-outs. Up 27. We know Cespedes struck-out the same number of times looking, so a lot of those swinging strike-outs in 2013 came against the fastball. Want more proof? In 2012, when pitchers got two strikes on Cespedes they went to the four seam fastball 31% of the time. In 2013, 38% of the time. The put-away pitch for Yoenis Cespedes - four seam fastball. Take a look at Cespedes' whiffs with two strikes. 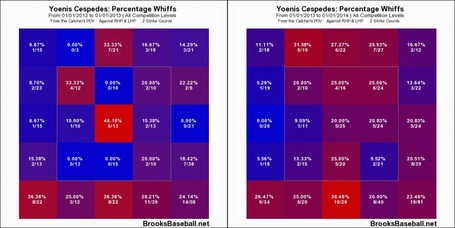 Oh boy. The increase in swinging strike-outs - fastballs up in the zone and beyond. Is this a plate-discipline problem? Yes and no. Cespedes is definitely expanding his zone up with two strikes. But he is also swinging through pitches up in the strike zone as well. It is a pitchers-throwing-fastballs-by-you problem.

Ok. So we got the strike-out problem identified. But what about the other problem - the batting average. Cespedes' 2014 ISO stayed within about 10 points of his 2013 mark, but the AVG dropped 50 points. A lot of that is the increase in strike-outs and trouble with the high fastball which we just identified. But is there something else?

Curveballs. I have shown before Cespedes really, really struggled against curveballs in 2013. Below are his stats again.

After being a pretty good curveball hitter in 2012, Cespedes got owned in 2013. Let's look and see how the pitchers pitched him with curveballs. 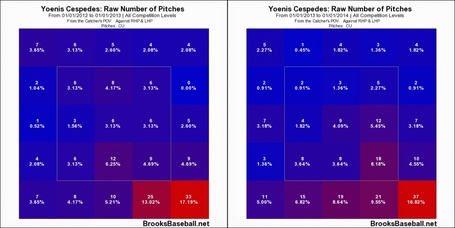 Not a whole lot different. A couple more off the plate down and away, but also a few more in the strike zone (69 vs. 62). Let's take a look at the curveballs Cespedes swung at. 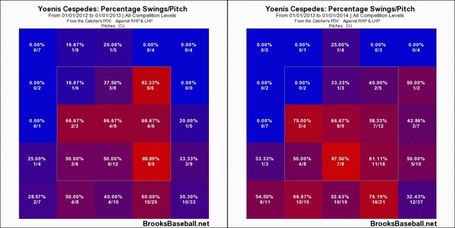 No drastic differences. Pitchers used the curveball when ahead of Cespedes the same amount. How about the curveballs Cespedes put in play. 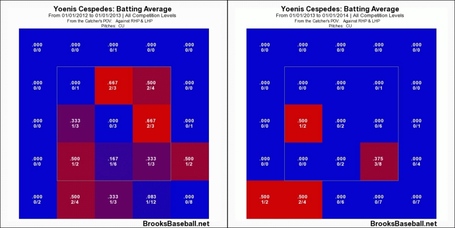 Let's wrap this up. What have we learned? First, Cespedes saw more fastballs in 2013 than in 2012. Of these fastballs, more were thrown up in the zone and beyond. On the high fastballs, Cespedes did very poorly, resulting in a higher strike-out rate and lower AVG. Cespedes also really struggled in 2013 on curveballs. Cespedes saw roughly the same amount of curveballs, in roughly the same situations, roughly in the same zones, but had far less success against them. Does all this mean Cespedes has a plate discipline problem?

Probably. Since coming to Oakland in 2012, Cespedes swings at a lot of pitches down that he shouldn't. But Cespedes is actually a pretty good low ball hitter, even in 2013 (see below). Although he should lay off the pitches down and off the plate. In 2013, pitchers really started pitching Cespedes up with the fastball, and with good success (again, see below). So, it would behoove Cespedes to lay off the pitches out of the zone (a first), hit the fastballs up in the zone (like 2012), and handle the curveballs better (like 2012). 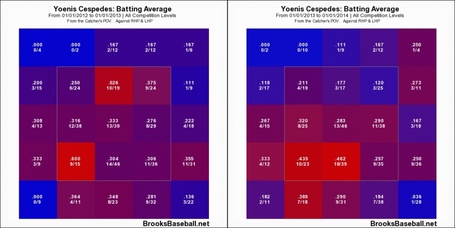 Unfortunately, A's fans should be concerned. The first one is pretty hard to teach. (Seriously, how do you practice plate discipline? I am sure the Giants and Angels would love to know.) The second two are swing related. Next week I will (once again) break down Cespedes' swing (for the last time) to show how he could improve on them. Stay tuned.

Big thanks to Brooks Baseball for all the info. That website is awesome.