With the A's and Mariners squaring off for four games, I asked Matt Ellis of Lookout Landing a few questions about his favorite team. Here's what he had to say!

The A's first series of the season didn't go the way we would have liked, but it's over now and we can look forward to a long summer with 159 more games. Oakland's first intra-division series kicks off today against the Seattle Mariners.

For more on Elias, see Question #7 in this chat, and for more on Young see Question #5. For more on Hernandez, start watching baseball because if you don't know about him already then this is probably your first game (spoiler: he's good). Erasmo Ramirez made one start against Oakland last year and lasted only four outs, surrendering four runs on three hits and four walks in a game the A's won 9-0.

1. I'm sure you've spent all offseason dissecting every possible angle of Robinson Cano, and I'm sure you're sick of talking about him by now. But can you give us a quick rundown of your thoughts on his contract and what he means to the Mariners?

LL: I can only speak for myself, but I'm sure not tired of talking about Robinson Cano yet. It still kind of feels like I'm going to wake up tomorrow and find out the whole thing was some sick joke, and that Chone Figgins is the Mariners starting second baseman in 2014. That's kind of what it feels like to be a Mariners fan.

A few questions with Athletics Nation

A few questions with Athletics Nation

It's a lot of money, for sure. But even with the most conservative discount rate to future dollars, the deal isn't egregiously over Dave Cameron's $6 million per win estimate. Even if it is, I'd rather spend more on an athletic infielder without a history of injury than a two-tool slugger who will only be able play 1B or DH in five years. Cano unquestionably makes the Mariners a better team both today and tomorrow, and even if we ignore the goofy "culture of winning" stuff, his impact is going to go beyond the field, and I know that sounds as stupid as it does. For me, anyway, that's almost the most immediate impact of the Cano signing: I feel like the Mariners are finally taking themselves a little more seriously. And that feels nice because last year these guys started Robert Andino at short over Brendan Ryan for a week just to make a passive-aggressive point, and that sure isn't taking yourself seriously.

2. What will become of the promising Nick Franklin now that Cano is playing his position?

LL: Franklin is going to be stashed in AAA Tacoma, and barring injury to Cano or Miller, I think it's safe to say he will be there awhile. There were rumors he was going to go the whole Dustin Ackley route and convert to the outfield, but the two spring innings he played in right this year were apparently his idea after he realized he lost the starting SS job to Brad Miller. The way I see it, the Mariners have two options: One, wait for the trade market to come to them (another team's injury, a firesale, or a deadline deal) or two, keep him, and convert him to the outfield for when Almonte, Saunders, or Romero inevitably crater in July. I seriously doubt the first part of the second option is going to happen.

3. Justin Smoak and Dustin Ackley were top prospects, but they have each struggled for a couple of years. Do you think that either of them will have a breakout year in 2014, or ever?

What to do about the outfield problem?

What to do about the outfield problem?

LL: Short answer: No. Long answer: Mariners fans have spent so long oscillating between disappointment and excitement with these two that we don't really know how to feel anymore. Not how to feel about them, how to feel. Justin Smoak has looked really great in these first two games, but his "breakout" 2013 was the second-worst age-26 season for a first baseman since 1990 (using fWAR), he's never seen a K% lower than 20%, and he can't seem to decide which side of the plate is his best. Ackley is even weirder, because he will have these long stretches of getting it, and then suddenly put up a wRC+ of 44 for half a season. So if either gets off to a truly sustainable hot start this season, any feelings of hope and optimism are going to have to be shared with mistrust and fear. Honestly, I think the reality of these two is that if they have an actual breakout season, it's just going to happen and we'll acknowledge it after the fact. So that "No" is actually more of an "I Hope So," or perhaps a "Maybe," or more accurately, "Boy, Wouldn't That Be Nice?"

4. Hisashi Iwakuma was quietly one of the best pitchers in the AL last year, but he is starting the season on the DL with a sprained finger tendon. Can you give us an update on his status and how long you think he'll be out?

LL: Iwakuma has been cleared to throw from a mound, and I believe the latest updates slot his arrival around mid-to-late-April. His move to the 15-day was retroactive to March 21, so he's probably going to be with the team by next week to throw bullpens in preparation. 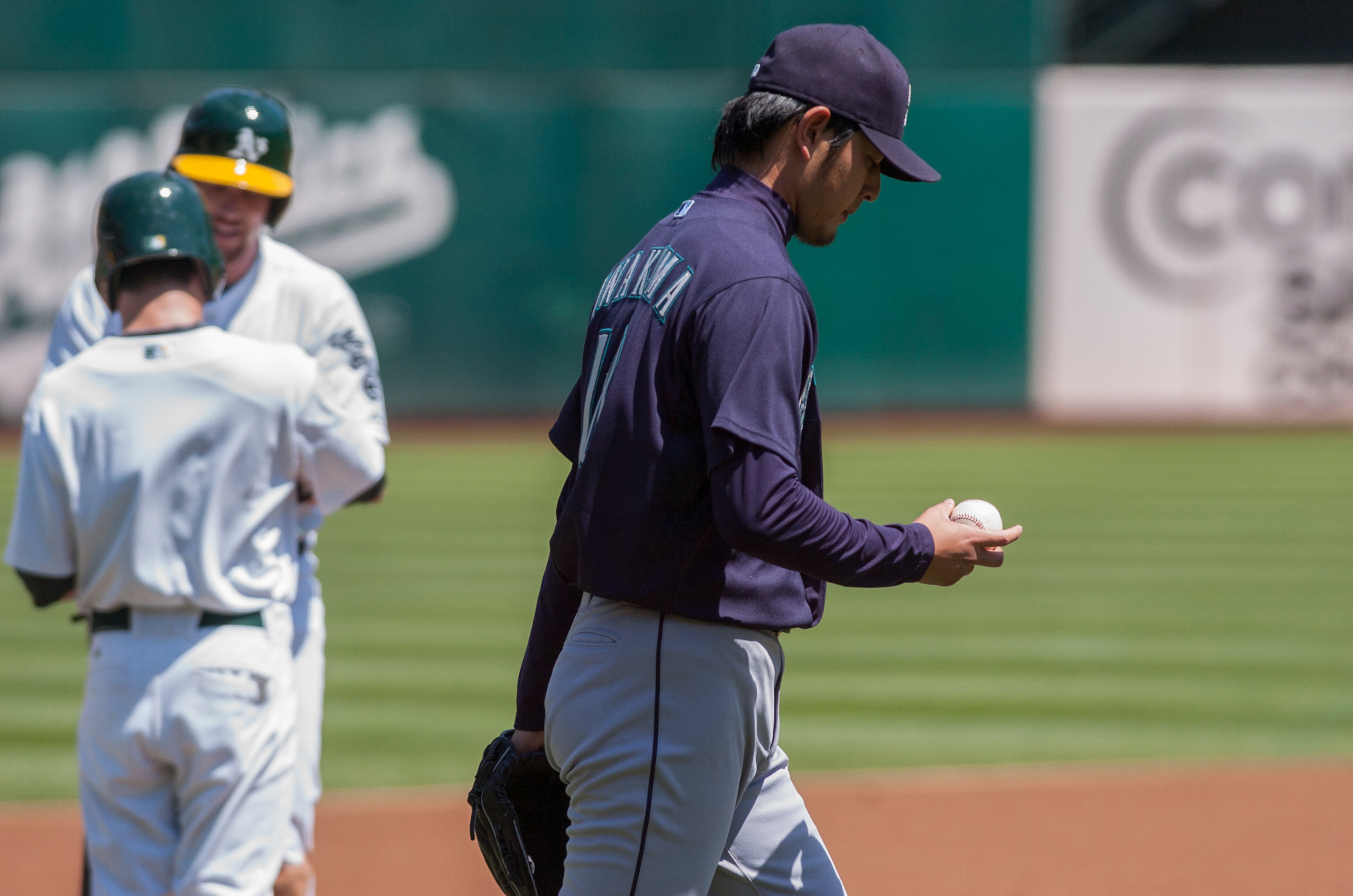 Iwakuma allowed six home runs to the A's last year, of the 18 he allowed overall.

5. In Iwakuma's stead (and with the absence of Taijuan Walker), the Mariners are calling on Chris Young to fill out the rotation (the really tall pitcher, not the one who played outfield in Oakland last year). Over/Under on number of starts Young makes before he gets hurt: 9

LL: That all depends on how the Mariners use him. If all goes well and Walker and Iwakuma are both back by the end of April, Young will only need to throw maybe five, six, seven starts. Of course, nothing ever goes quite as smoothly as planned, and even if Walker and Iwakuma come back, and Young is pitching well, I wouldn't be all that surprised to see Young moved to the bullpen for long relief. That said, Young signed the 45-day release clause that Randy Wolf whined about, so even if he gets injured, he can just go home and play with his kids and a few extra hundred thousand dollars afterward. I think he's good for seven starts as a part of the rotation, and that he'll be pushed out by Walker or Iwakuma before his body has a chance to explode again.

6. While we're on the subject ... Over/Under on number of games that Corey Hart plays this year: 81

7. What is a Roenis Elias, and should I be afraid of it?

Why the Mariners could (maybe) win the pennant

Why the Mariners could (maybe) win the pennant

LL: I want to say yes. The Mariners made this exact move with Brandon Maurer last year, putting him in the starting rotation straight from AA. It didn't work, his confidence was shattered and he's still broken as a result. But Elias? It's tough to know exactly what the Mariners have because there is just so little data. He sits at about 92 on his fastball, but has a great changeup and crazy movement on breaking balls -- his slider moves so much that I'm pretty sure Brooks thinks it's a curve, which is to say nothing about how good that pitch looks, too. And this is just an eye test from seeing one game in person, but he appears to have a lot more mental maturity on the mound than Maurer ever did, which bodes well for making such a big jump. I mean, he escaped Cuba on a boat and fled to Mexico four years ago, so you would think his nerves are pretty solid. That said, he's still unpolished. He came into camp with different release points for all his pitches, and has so far had a little bit of a walk problem. Lots of upside, a bit to be uneasy over. All in all -- he wouldn't be here if Walker and Iwakuma weren't hurt. Take from that what you will.

8. Can you please write me a haiku about Felix Hernandez?

LL: Okay. It's called "But Yeah, It's Those Other Things, Too"

It's not his changeup
Perfect game, strikeouts, Cy Young
It's that he likes us

Thank you, Matt, for participating in the Q&A!

The series starts tonight. First pitch is scheduled for 7:05 p.m, Chavez vs. Elias. I'll be sitting in Section 114. And they don't have Michael Morse or Raul Ibanez anymore, so neither of them can have an obnoxious multi-homer game tonight.