With the A's and Rangers squaring off for three games, I asked Adam J. Morris of Lone Star Ball a few questions about his favorite team. Here's what he had to say!

The Oakland Athletics are finally near the end of their long run against divisional opponents. They've gone 5-5 in the first 10 games of their Texas Tour, having completed three of four straight series against the Astros and Rangers. They're in a tie for first place (15-10) in both the AL West (with the Rangers) and the AL overall (with the Yankees). They still have the best run differential in baseball at plus-38. Only four other AL teams have positive differentials, and the Rangers are not one of them -- they are exactly even, with 110 runs scored and allowed.

Holy crap, that would be a compelling slate of starters for a playoff series, much less a set in late-April. We saw Gray vs. Perez last week, but Gray vs. Darvish is essentially a Battle of the Aces. Kazmir and Perez are both pitching out of their minds right now, but can the friendly confines of The Ballpark in Arlington jump-start the offenses? And Chavez/Ross is a battle of "relievers who were pushed into starting by team injuries and are surprising everyone so far." More on Ross in the Q&A. The A's would love to return the favor from last week with a sweep in Texas, but that will be a difficult task given the hurlers they will have to defeat along the way.

1. One of Texas' big moves last winter was the acquisition of Prince Fielder for Ian Kinsler. Do you think that was a positive move for the team? Would you do it again if you had the chance?

AJM: I wrote at the time that this was a deal that made sense for both teams, though with the Rangers having the higher risk (because of the money they were taking on) and the higher reward (since Fielder has the higher ceiling). But Texas needed a 1B and had an extra MIF, and the Tigers needed an MIF and could part with Fielder in order to move Cabrera back to 1B, and the Rangers were betting Fielder's down 2013 season was an aberration. Early on, Fielder hasn't hit, which is worrisome -- after all, the Rangers owe him $24 million this year, $24 million next year, and then $18 million per season (after Detroit's subsidy) for the next five seasons after that. But it's still early, and hopefully Fielder will bounce back and be the guy who was one of the premier first basemen in the league prior to 2013.

2. The other big move was the signing of Shin-Soo Choo. Of course, Choo is already hurt (sprained left ankle). When is he expected to return?

AJM: Either Choo will be back on Monday or Tuesday during this series, or else the Rangers will likely put him on the DL. The initial MRI results on his sprained ankle had the Rangers hopeful that Choo would be out less than 15 days, and thus they were willing to play with a short bench for the past week to see how he progressed. If he does go on the DL, it will be back-dated to last Monday, and he'll likely only miss the minimum.

3. Kevin Kouzmanoff has also joined the list of injured Rangers. What is his status, and how much will his loss affect the team?

AJM: Kouzmanoff has a herniated disc, and has received an epidural. If the back responds to the injection, he would likely be back in a few weeks. Otherwise, he'll need surgery, and will likely be out until at least August. Kouzmanoff came up big filling in for Adrian Beltre while Beltre was on the DL, but he appeared to me to be a bench player on a hot streak, not someone who was going to be a major contributor over the course of the season. His loss impacts the team's depth, but I don't think it should have a major impact going forward.

4. In Choo's absence, Michael Choice has been getting some starts. Do you think the consistent playing time might help get him going? And is he properly cast in the leadoff spot?

AJM: Choice is in the leadoff role because he's replacing Choo, and Wash prefers to plug the substitute into the same lineup spot, rather than change around the whole order. He's not a leadoff hitter, but he looks like someone who can be a nice contributor -- he reminds me of David Murphy, a guy who can either be an okay starting outfielder or a great fourth outfielder.

5. How is Joakim Soria working out as the closer after recovering from a second Tommy John surgery?

AJM: Joakim Soria has looked good, for the most part -- definitely better than he did in the second half of last year, when he was still working his way back. It's fascinating to watch a late-inning guy who relies on being able to throw multiple pitches in any count, versus the 96 mph fastball/84 mph slider guys who usually dominate in relief roles. He had one bad outing, while pitching with a big lead in Boston in a non-save situation, but otherwise, he's been very Soria-like -- throwing strikes and getting guys out. 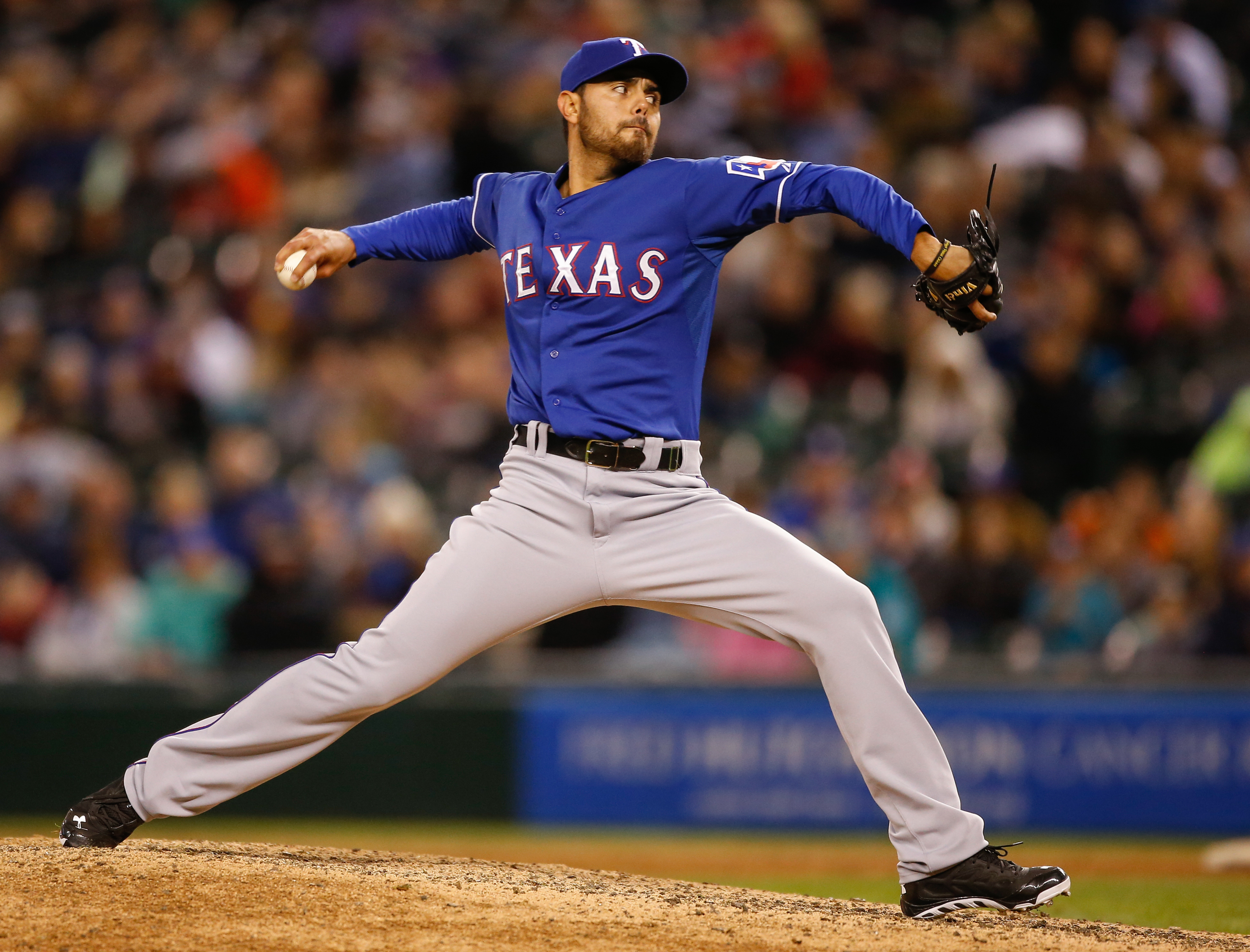 Joakim Soria has rejected the nickname Mexicutioner, but Texicutioner has a nice ring to it. -- Photo credit: Otto Greule Jr

6. Who has been the best reliever in the Rangers bullpen so far?

AJM: I think you could make an argument that Soria has been the best reliever for Texas so far this season, especially if you want to disregard that ugly Boston outing. Otherwise, you'd have to go with Jason Frasor, who has yet to allow a run in 7⅔ innings. The pen was a strength for Texas last year, but has been shaky so far in 2014, and there's been a revolving door out there, with Texas most recently losing Pedro Figueroa (claimed from you guys, and looking like a decent lefty middle relief option prior to his injury) to Tommy John surgery.

7. Can you give us a quick scouting report on Robbie Ross, who will start on Wednesday?

AJM: Ross is an interesting story, a second-round pick who got above-slot money to sign out of a Kentucky high school in 2008. He came up through the system as a strike-thrower who got ground balls but didn't overwhelm hitters. In spring training  2012, he was mentioned as someone who would have a chance to earn a job on the Opening Day pitching staff, which seemed like puffery to me, given that he had a whopping six games above A-ball up to that point. But he impressed in camp, and has been in the majors since the start of the 2012 season, working as a reliever in 2012 and 2013.

He got the opportunity to win a job in the rotation this spring, and by virtue of a strong spring performance and a lot of injuries, he made the Opening Day roster. Ross has definitely made the most of it so far, with a 2.45 ERA through five starts. His fastball has a natural cutting action that makes him better against righties, and worse against lefties, than your average left-hander. When he's on, he's going to throw strikes -- he hasn't walked a batter in his last three starts -- and get a lot of ground balls. He's a fastball/cutter/slider guy who isn't going to dominate, but who, when he's good, is going to make the outfielders bored because of the lack of action out there.

8. Colby Lewis, who hadn't pitched in the Majors since July 2012, has now made three starts this season. Is he back to his old self, or has he lost a step after elbow surgery?

AJM: Lewis was a legit #2/#3 starter from 2010-12 for the Rangers, and he's not back to that point right now. His fastball is going to be around 88 mph, and he throws mostly the fastball and slider now, relying on command and location as compared to stuff. And Colby had some issues in the spring with his command due to a positive part of his offseason hip surgery -- he has more range of motion in his hip now, with the upshot being that he had to rediscover his release point because he is moving so much better. At this point, he looks like a solid back-end starter, and the Rangers will gladly take that from him.

9. Last time, I asked you to write a haiku about Donnie Murphy. It did not reflect favorably upon the infielder. Would you like to update it now after he went 4-for-11 with a homer and three RBI against the A's last week?

Small sample sizes
Can turn scrubs into All Stars,
But midnight still strikes.

The series starts in a couple hours. First pitch is scheduled for 5:00 p.m., Gray vs. Darvish. The A's seem to have the antidote to Darvish's mojo, so the question will be whether the pitching and defense can do their parts if the lineup manages to notch a few runs against him again. Kouz is out, but Beltre is back. Choo is also out, but Murphy is in there with hopes of inexplicably terrorizing A's fans once again.