With the A's and Astros squaring off for four games, I asked Ryan Dunsmore of The Crawfish Boxes a few questions about his favorite team. Here's what he had to say!

The Oakland Athletics are coming off a series against the Rangers and I don't want to talk about it. All you need to know is that the A's are no longer in first place, but that they still have the fourth-best record in baseball and have allowed the second-fewest runs. And now they start a ten-game road trip with four against the Astros, which will hopefully provide a quick break from reality before they get their next test against the Rangers and Red Sox.

The first two games will be re-matches of the final two games of last weekend's series. On Saturday, Oberholtzer went 5⅔ innings and allowed only one run, but he did serve up eight hits and two walks while striking out only three batters. The A's couldn't push runs across against him, but they were able to work up his pitch count by putting at least one runner on base in each frame; in the end, they saw enough of Houston's bullpen to mount a comeback and win the game. Peacock was not sharp in his first start of the season, but the fact that it was his first start could have played a role in that. He was pulled after only 83 pitches so that he didn't overdo it his first time out, and a sixth inning would have made his line (two runs, five hits, three walks, four strikeouts) look a lot better. More about Keuchel and McHugh in the Q&A; McHugh is filling in for Scott Feldman, who went on the disabled list retroactive to Friday with right biceps tendinitis.

The last series between these teams ended in a sweep by Oakland, but this time the series will be four games, it'll be played in Houston, and the A's are coming off a humbling defeat by the Rangers. A repeat sweep is unlikely, but if the A's can bear down, clean up the defense, and do a better job of driving in their runners, then winning three out of four is within reach.

1. Now that you've seen George Springer in the Majors for a week, what are your first impressions? Is he ready to stick in the bigs? And have your opinions of him changed at all based on this initial sample?

More from our team sites

More from our team sites

RD: I have seen the flashes that make Springer such a special prospect, but he's still adjusting. I expect him to stick in the majors. Jeff Luhnow has gone on record as saying the Majors is not a place for a prospect to figure out his game, and prospects won't be called up until they are ready for that reason. If he is sent down, I'll take solace in Mike Trout's number after his first call up (.220/.281/.390 in 123 ABs). Not every prospect works out right away.

We knew what we were getting with Springer: a five-tool player that strikes out a bunch. Springer hasn't changed that image of him in his small sample size. If anything has changed, I was even more impressed with his speed.

2. Lucas Harrell is out of the rotation again, and he cleared waivers on his way back to Triple-A. What did the Astros see in him that caused them to put him in the rotation to open the season? And is there any chance that he finally develops into a Major League starter?

RD: The Astros viewed Harrell strictly has a starter. Whether that was because they felt he could return to his 2012 form, or because they hoped to generate some trade value for him, I'm not sure. At many points during this past offseason, most of the TCB staff expected him to be one of the first cuts to create space on the 40-man roster. I honestly think the Astros wanted to give him one more shot to figure it.

I do believe Lucas Harrell can be a Major League starter; he has shown that during stretches of his career. The question is, can he put together a full season of quality starts?

3. Dallas Keuchel entered the season with a 5.20 career ERA in 239 innings, but he's off to a fantastic start this year. Is he for real? And if so, what changed?

RD: Yes, he has made me a believer. I admit I was late to the party; TCB staffers picked Keuchel as this year's sleeper. My pick was Robbie Grossman, who is now in Triple-A Oklahoma City.

Two things that have changed for Keuchel. He has seen an increase in velocity and he has increased his use of the change-up. I defer to my colleague Chris Perry for a more in-depth look at Keuchel.

4. Who would you prefer in a save situation right now: Chad Qualls, Anthony Bass, Matt Albers, or Josh Fields? (Or someone else?)

RD: Lets see, Chad Qualls blew a save in Oakland and Josh Fields blew a save in Seattle. I guess that leaves Albers and Bass. I would prefer they stay the course with Bo Porter's plan of "pitch when called upon" approach rather than label a closer. 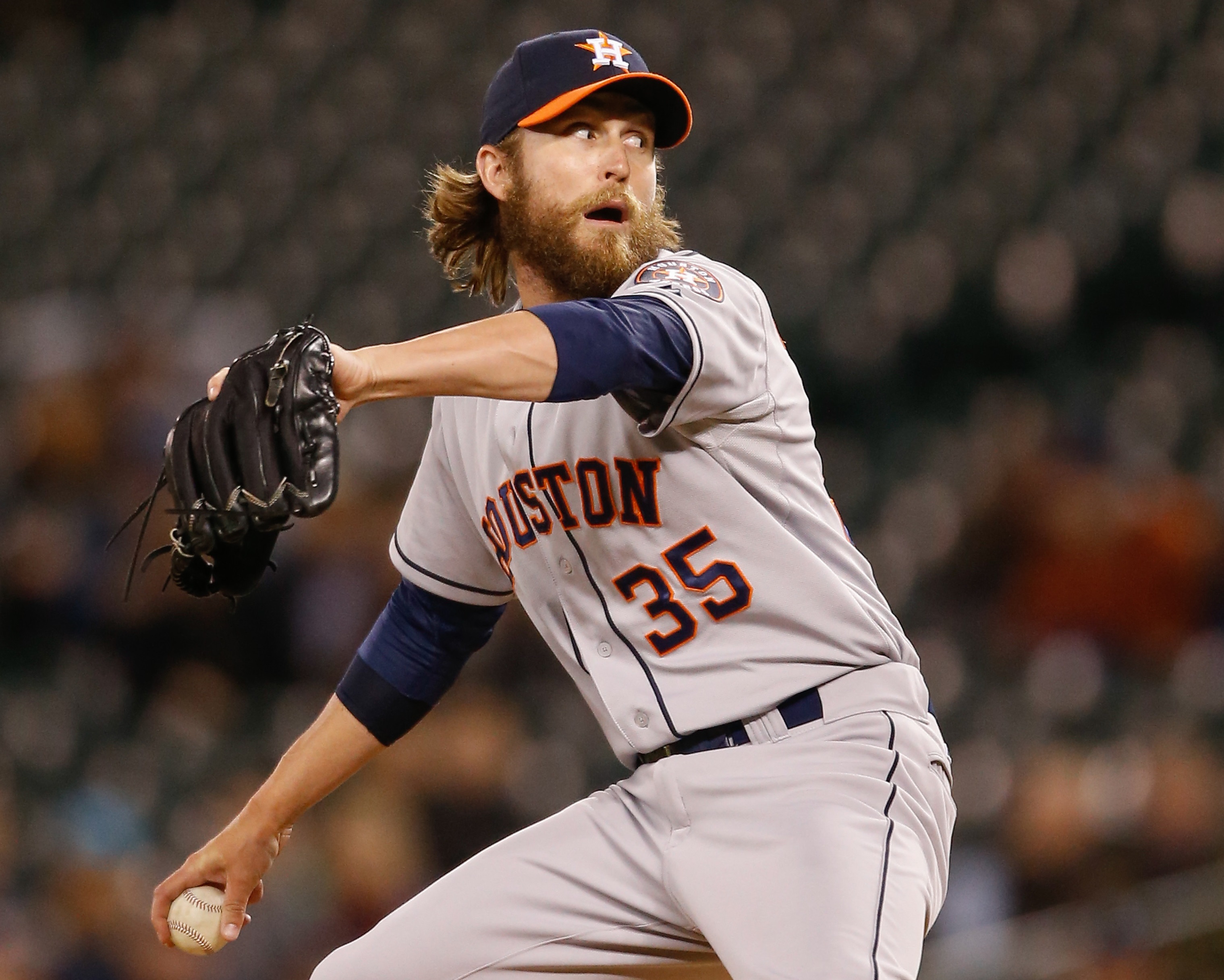 Josh Fields blew a save for the Astros on Wednesday. See, other teams do it too!

5. Scott Feldman has a 1.69 ERA in his first four starts. How much has his presence helped the pitching staff? And is he just hot, or has he changed something that can explain his improved performance?

RD: I believe he is doing exactly what he was brought in for -- to be the number one pitcher on the staff. Feldman isn't an ace but he takes the pressure of being the stopper off the shoulders of a young staff.

Feldman's two keys to his success are his groundball and walk rates. I wouldn't say there has been a change in that, but he has kept teams from having the big inning against him.

Collin McHugh was called up from Triple-A Oklahoma City to replace Scott Feldman in the rotation. Houston selected McHugh off waivers on Dec. 18, 2013 from Colorado. He has pitched 14 innings this season in Triple-A Oklahoma City, posting a 4.50 ERA and 1.21 WHIP. Can he repeat his dazzling performance against the Mariners (6⅔ IP, 3 H, 0 R, 12 SO)? Probably not, but I'm rooting for him. Sidenote, McHugh is an interesting writer -- he blogs about his experiences in baseball regularly. It's worth a read

RD: The Astros lead the league in fielding percentage (.992), but are dead last in FanGraphs' defensive metric (-13.4). The main improvement of their defense is the fact that they are now making the plays a professional team should make. Defensive shifts have also become a staple for Houston, which helps compensate for any defensive shortcomings.

8. Speaking of Villar, he already has three home runs in 74 plate appearances. What is his ceiling as a hitter?

RD: ESPN's Eric Karabell recently compared Villar to Jimmy Rollins. Rollins is a fair comparison -- solid defender at shortstop with speed and some pop in his bat. Now I will admit, if Villar turns out anywhere close to Rollins, Astros fans will be surprised and thrilled to have another blue-chip player.

9. The Astros are sixth in the Majors in homers, but also sixth in strikeouts and last in OBP. Is all-or-nothing power going to be the theme of this offense for the year?

RD: No, the Astros haven't embraced the Trogdor style offense. The home runs are a surprise, but the strikeout rate is not. Home runs have been the majority the team's offense this season; I expect that to come down.

10. Which of the four other AL West teams would you least like to see win the division, just on a personal level? And what would be the opinion of the community at large at The Crawfish Boxes? Basically, which team bugs you the most?

RD: Is Bud Selig a division team? I'm over the idea of half the Astros' road games starting at 9 p.m. central time.

If I'm completely honest, the Rangers bug me the most. The team doesn't necessary bug me but the Rangers fan do. The hatred goes back to a general disdain between the cities of Houston and Dallas. The relationship between the two cities reminds me of a relative that you loathe to see but can't get out of it. I believe the TCBers would agree with that pick. Some may lean toward the Angels because of Pujols and his previous transgressions against the Astros.

Thank you, Ryan, for participating in the Q&A!

The series kicks off in a little under an hour. First pitch is scheduled for 5:10p.m., Kazmir vs. Oberholtzer. The Rangers are off today, so a victory would put the A's back in a tie for first place. Coco and Gentry are both in the lineup against the left-handed Oberholtzer, and Moss is starting at first; Barton and Reddick are on the bench.