No two people keep score the same way, but Jeremy Koo will teach you how by taking you back to the first card he ever kept of the Athletics: April 20, 2003 against Texas.

Share All sharing options for: A's scorecard stories: How to keep score

On April 20, 2013, 23-year-old Colby Lewis of the Texas Rangers was set to make his eighth career start at the MLB level. For the Athletics, Ted Lilly was starting in his first full season for the Athletics after being received in trade from the New York Yankees in a three-team deal that sent Franklyn German, Carlos Pena, and Jeremy Bonderman to the Detroit Tigers. One of the pieces of that trade, Jason Arnold, was sent to the Toronto Blue Jays as part of a four-team deal to receive Erubiel Durazo from the Arizona Diamondbacks.

Alex Rodriguez was in the third year of his record-setting ten-year $252 million contract, Mark Teixeira was beginning his rookie season, and Hank Blalock was in his first full season.

How to keep score like 15-year-old Jeremy F. Koo

My scorekeeping has definitely evolved over the years. Just looking at this card, you're going to notice a lack of color. One of the beauties of the system I adopted is that one doesn't need the colors to figure out what happened during the game, but those colors help me. I will save color-coding for a more advanced edition of making a scorecard.

I print my own scorecards, but the simple scorecard I have here is lost to computers that existed before "the cloud" referred to anything other than a thing that maybe looked like an animal in the sky. Fortunately, a pair of Braves fans have developed a gorgeous simple scorecard with plenty of room for substitutions, twelve innings of play, pertinent information, and so forth.

You can also visit your local sporting goods store and buy a scorebook, but I find it impossible to use those unless you're willing to use a pen. They tend to be busy, demanding a lot more information than most casual scorekeepers want to keep.

If you are printing out your own scorecard, you will need a flat surface to write out your score. I personally use a one-inch binder combined with a little binder clip to hold the card in place on the cover during the game.

Third, familiarize yourself with your scorecard

Your scorecard has space for the lineup on the left and boxes to the right of those names underneath numbers representing each inning. Each box represents a plate appearance and potential trip around the bases for that player. There is also a separate place to enter pitcher appearances and statistics.

Fourth, figure out the code

Liners are "L" or "LO", flyballs are "F", flyball in foul territory are "FF." A good scorekeeper knows to watch the umpire for his fair or foul signal when a fielder catches a ball near the foul line.

Other sorts of plays generally are abbreviated as you would expect them, but mlb.com offers a helpful list. 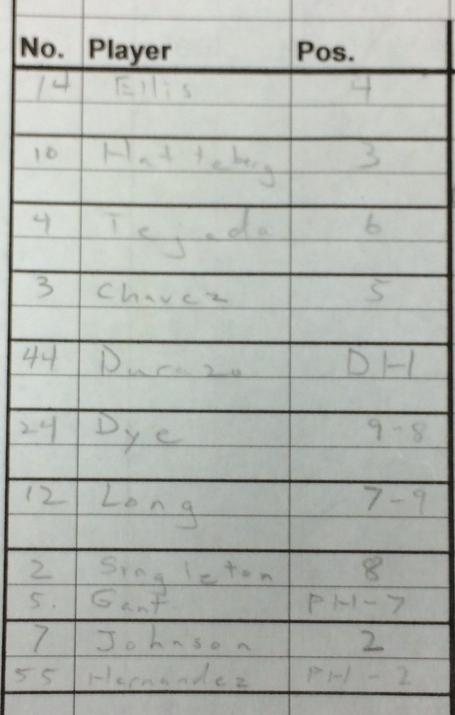 The positions zigzag around the diamond.

Second baseman Mark Ellis came up for Oakland in the first inning against Texas on April 20, 2003. He struck out swinging, the "K" points forward.

First baseman Scott Hatteberg then got on base with a single, noted with a "1B" in the lower right corner.

Shortstop Miguel Tejada walked, noted in his box with a "BB" for base-on-balls. Hatteberg advanced to second, noted in his box by drawing a little arrow toward the upper right corner, and writing a "6" noting that the batter playing shortstop advanced the runner. In a second, you're going to notice a scorekeeping error I made that I'm noticing for the first time, eleven years after writing this card.

Third baseman Eric Chavez grounded into a fielder's choice, noted with an FC in the bottom right corner. Hatteberg advanced to third, noted in his box by drawing a little arrow toward the upper left corner, and writing a "5" noting that the batter playing third base advanced him. Tejada was out on the fielder's choice, the shortstop throwing to the second baseman. This is noted by writing "6-4" in the general area of the base the existing runner was trying to go to, though in my youth I would write a "P" for "putout" for every ground ball out.

Designated hitter Erubiel Durazo hit a single, noted with a "1B" in the lower right. Scott Hatteberg scored on the single, noted by drawing an arrow to the lower left corner, writing a "DH" because the designated hitter drove him in, and circling the "DH" to symbolize that a run scored. This is an RBI, so we symbolize that with a dot over the "1B" symbol in Durazo's box. I should have noted that Chavez advanced to third on the play, except I mistakenly advanced the already out Tejada.

Finally, right fielder Jermaine Dye lined out to the third baseman. You can write an "L5" or "LO5" to symbolize that.

Seventh, watch out for substitutions 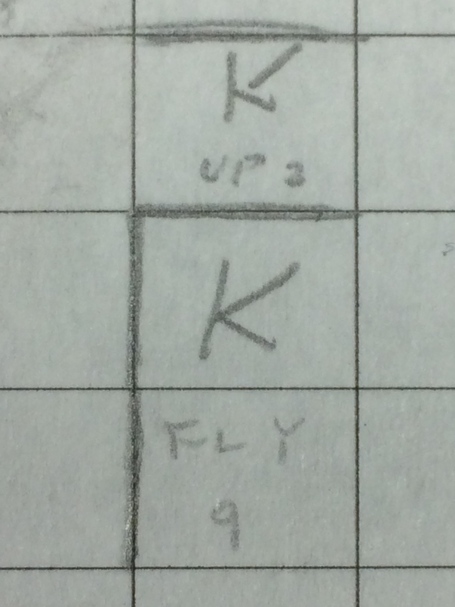 I have been blessed to have Dick Callahan and Roy Steele as our announcers in my time at the Oakland Coliseum. They are absolutely clear in announcing defensive changes with information about where they are batting (significant if there is more than one change) and pitching changes. Take advantage by noting substitutions in their proper place by drawing a thick vertical line for a pinch hitter or defensive change and a thick horizontal line to represent where one pitcher's responsibility ends and another's begins.

Eighth, choose a system that works for you

No two people keep score the same way. Some people keep track of every detail, down to pickoff throws and pitch order. Others don't track anything beyond what the batter did and whether a player scored. Some draw a diamond, some draw a line noting where the ball went when it was put in play, and so forth. What do you want to remember from your day at the ballpark?

For me, I like to look back at the little oddities that did not seem important at the time. For instance, who the heck was #7, Johnson, playing catcher?

Mark Johnson appeared in thirteen games for the Athletics in 2003 and was the backup catcher behind Ramon Hernandez as the Athletics broke from 2003 spring training. His poor offensive performance led to his demotion in favor of Adam Melhuse, who had been stashed in Sacramento to start the year. But on that day, I saw Mark Johnson collect one of the three hits he ever earned as a catcher for the Oakland Athletics. He now manages the Chicago Cubs' Class-A team in Geneva, Illinois, the Kane County Cougars. 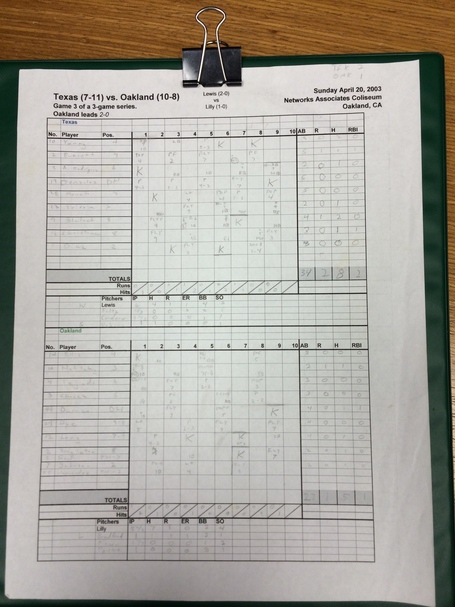