The Trading A's: Who Do You Want Back?

The Trading A's. How have the recent trades worked out for Oakland the last few years? Did your favorite player or can't miss prospect get away? We all have favorite players, some fans even have favorite minor league players. Players flame out, get traded, or just get cast aside for new favorites. Today I look at recent players and prospects after they left the Athletics system. I also look at some recognizable trade patterns and hope to show why the Burns trade may be one of the A's best.

Share All sharing options for: The Trading A's: Who Do You Want Back?

The A's have made a lot of moves the last few years and I was curious which ex-A's are doing well or started off hot this year. I looked up some former A's prospects and also some former A's players from the 2012-2013 Athletics.

For the players recently departed, 3-weeks is an extremely short amount of time to grade or judge anything. However, if you thought the ex-A's were very good or very bad to begin with, 3 weeks can help confirm your suspicions. It's been about 1/9th of a season. I have broken down this exercise in curiosity by each trade over the last few years to see if there is any recognizable trade patterns.

Statistics used this article: (wRC+) a players total offensive contribution with the bat. (FIP) Fielding Independent Pitching. What era the pitcher should be, assuming that performance on balls in play and timing were league average. I also use (OPS) on base percentage (obp) + slugging percentage (slg).

Billy Burns- AA Midland. Burns is what we thought he was; so far. 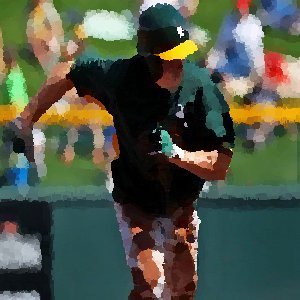 Blevins for Burns doesn't scream win now. But Blevins was replaced and then some rather easily by the quartet of Fernando Abad, Joe Savery, Drew Pomeranz and Eric O'Flaherty. Burns may also be helping the A's "win now" in 2014. If now means September 2014. The 2014 playoffs could also be a very good Burn as well. 14 position players, four SP, and seven RP ought to allow Burns to light the playoff fire. 4) Brett Anderson Trade:

Is there an "age" sweet spot the A's are pursuing? Seth Smith, Chris Young, Grant Green, Kurt Suzuki, Tyson Ross, Cash Trades, minor trades, DFA's and more. My analysis overall on how the A's have done with trades the last few years.

Doolittle Contract Announced: 5 years/13.75 million. ( I calculate he will be a super-2). Doolittle was a 1st round supplemental pick in 2007; losing Frank Thomas gained the A's this pick.