Yoenis Cespedes appears to have become more selective at the plate. Is his improvement real?

Share All sharing options for: The new, patient Yoenis Cespedes

Everyone was worried about Yoenis Cespedes heading into the season. Actually, it seems like everyone is always worried about Cespedes, since he can be a bit inconsistent and when he looks bad he looks bad. He took a step back in 2013 and he had an awful spring while he tried to revamp his swing, so the trepidation was warranted. But with every passing day, it becomes more and more clear that everything is going to be fine and that he is far too talented to completely fail.

What's most interesting isn't the fact that he's still doing the things that we expected, but rather the new skill that he may have added to his utility belt. The power is still there, as Cespedes has knocked four home runs and nine extra-base hits already. He's made some good plays in the outfield, particularly hustling into the left-field corner to cut off hits down the line and turn doubles into singles. He still makes some bad decisions on the basepaths. But in a new twist, he has drawn nine walks against 12 strikeouts. Let's put that into perspective by looking at what percentage of his plate appearances have ended in walks and K's throughout his career.

As you can see, plate discipline and/or pitch recognition were problems for Cespedes last year; his rates actually worsened from his rookie campaign. However, they are better than ever now, as he is walking more and striking out less than he ever has before. The cause for these improved stats? Well, first we have to acknowledge, as always, that we are dealing with a very small sample and this could all wash out as he returns to his normal career rates. However, it's worth looking deeper to see if there could be a sign that this development could be real. To the stat cave!

Fangraphs has plate discipline stats which provide information on when batters swing and how successful they are when they do so. A quick run-down of the stats we're looking at here:

Before we start analyzing these numbers, I'll say again that they come in a tiny 19-game sample and that Cespedes could settle in to his old rates as the season wears on and the plate appearances pile up. We're not looking for concrete conclusions here, but rather possible explanations for why his improvement could be real if it's real.

Let's start from the left and work our way over. The first thing we see is that Cespedes has been chasing pitches out of the zone slightly less often; he still does so slightly more than average, but just barely. What really jumps out at you is the amount of contact he's making on those pitches out of the zone -- it's gone up from three out of every five swings in 2012, to two out of every three swings in '13, and now three out of every four swings so far this year. Is he making better decisions when venturing out of the strike zone such that he doesn't bite as often on pitches he can't hit? Is he laying off the breaking balls in the dirt but still going after the pitches just a couple inches below the knees? Or has the metric just failed to normalize yet?

Cespedes' success outside of the zone is the leading factor in the overall increase in his contact rate. He's making slightly more contact inside the zone as well, but the difference wasn't big enough for me to bother including it here. He's making more contact overall because he isn't missing as often outside of the zone. Whether or not that lasts, I can't say, but this is the one (only slightly meaningful) conclusion that I can make with certainty. 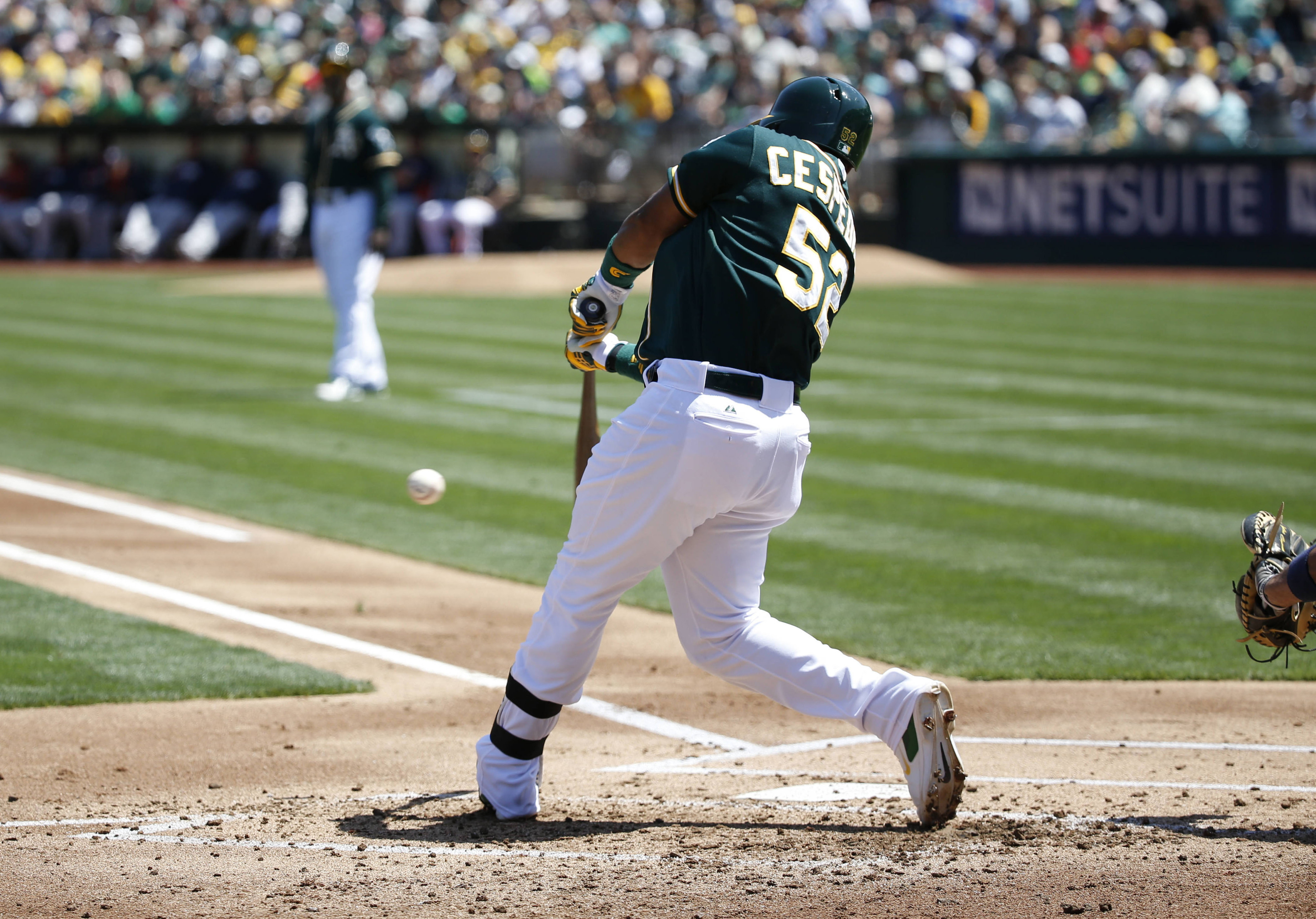 There is an 85 percent chance that Cespedes hit this pitch.

This next one is very confusing to me. Cespedes is seeing more pitches in the strike zone overall. I have to assume that this one is sample-size related, because I can't think of any reason why a sane pitcher would throw Yoenis more strikes on purpose. He has the ability to destroy anything in his wheelhouse and, in past years, he's been susceptible to chasing outside the zone. The conventional wisdom would suggest that you should get him to chase rather than giving in, and I expect that pitchers will do so even if he continues to make Vlad-style contact on anything within a foot of the plate -- after all, that's better than Vlad-style contact on pitches down the middle.

The swinging strike rate is the most meaningful thing in this table, though. That's partly because it is the largest sample, given that it's looking at all pitches thrown to the batter rather than just the ones in or out of the zone. It's also immune to any differences of opinion on what's in the zone and what's not; it's a simple, cut-and-dried, did-he-swing-or-not. And while Cespedes is definitely swinging (at exactly the same rate as last year), he's not missing nearly as often. Can he keep it up?

In 2012 and 2013, Cespedes ranked in the top-15 in baseball in swinging strike rate. He was a hacker, and it was no secret. The key was the damage he did when he made contact. This year, he's making the jump that all power hitters wish they could make: missing less often, but still enjoying the same positive results when he hits it. So far, he's managed to become more selective without sacrificing any power. In fact, his isolated power number (.247) is currently at a career-high. So he's gotten more selective and actually improved his power hitting. (Minor note: When his .241 BABIP normalizes, it will be because some extra singles fall in, and that will cause his isolated power to dip back down a bit even if he keeps collecting extra-base hits.)

Add it all up, and what do we get? Maybe nothing. This could all be statistical noise. But if you'd like to look at it through green-and-gold lenses, you can see a power hitter who has learned to become more selective at the plate and chase less often at unhittable pitches outside of the zone, resulting in more contact and fewer swinging strikes while not sacrificing any power on the pitches he knows he can unload on. If it's real, it's spectacular. Let's keep an eye on it to see how sustainable Cespedes' improved plate discipline proves to be.