With the A's and Rangers squaring off for three games, I asked Adam J. Morris of Lone Star Ball a few questions about his favorite team. Here's what he had to say!

The Oakland Athletics are in the midst of a long stretch against divisional opponents, and things couldn't be going better. They've gone 7-2 in nine games against the Mariners, Angels and Astros, and they got their homestand started on the right foot by sweeping the latter team over the weekend. However, there is one AL West club that they have yet to face, and it's the one who presents the biggest challenge to a third straight division title. That team is the Texas Rangers, and the A's will get their first look at their top competition on Monday.

These are three fantastic matchups. Although the Darvish/Straily pairing seems lopsided, history suggests that there's more than meets the eye; in their only previous game against each other last May, Straily out-dueled his counterpart by tossing seven shutout innings en route to a 1-0 victory. The Milone/Martinez matchup features each team's emergency back-up starter. The 23-year-old Martinez has pitched in exactly eight games above Single-A and has made one Major League start, in which he allowed three runs (two homers) to the Rays in six frames. Gray vs. Perez is a matchup of budding young aces; there's more on Perez in the Q&A. The finale should be the headliner in this series.

1. The big story surrounding the Rangers on Opening Day was the barrage of injuries they sustained in the spring. It looks like Yu Darvish and Elvis Andrus are back and playing as well as ever, but what are the statuses of Derek Holland, Matt Harrison, Tanner Scheppers, Adrian Beltre, Jurickson Profar, Geovany Soto, and anyone else I may have missed?

AJM: Yeah, there are a ton of injuries right now. Matt Harrison and Adrian Beltre are expected to be activated for this coming weekend's series against Seattle, so you guys will barely miss them. Derek Holland is ahead of schedule on his return from microfracture surgery, and while the original timeline was for him to be back right after the All Star Break, he's saying he will be back in June. Jurickson Profar and Geovany Soto are also expected back in June. Jim Adduci, who was just put on the D.L. with a broken finger, is out until mid-May. As for Tanner Scheppers, I'm not sure what his time frame is. There is apparently no structural damage to the elbow ligament, and it is muscle inflammation around the elbow that is causing the problem, but he's probably on the shelf for at least a few weeks.

2. With injuries come injury replacements, and the Rangers have a few in their rotation. Who has stepped up to join Darvish and Martin Perez, and which of them could be keepers?

Matt Harrison may be activated this coming weekend

Matt Harrison may be activated this coming weekend

AJM: The Rangers will be going with Nick Martinez to fill in for Scheppers against the A's on Tuesday. Martinez is a neat story, a guy who had only five games above A-ball before getting the nod to be in the Opening Day rotation (albeit for just one start). He was primarily an infielder at Fordham, but the Rangers drafted him and converted him to pitching, and he's been a success story so far. The other guy who has been a revelation is Robbie Ross. The former second-round pick surprised everyone by winning a spot in the bullpen out of camp in 2012, but he was a starter in the minor leagues, and was given a chance to win a rotation spot this spring. Though his outing yesterday was rough, overall, he's been very good, posting a 2.31 ERA (albeit with a 4.24 FIP). The Ranger rotation will be crowded when Derek Holland returns, but Ross has impressed so far, and could end up staying in the rotation long-term.

AJM: Its funny ... I wrote, after Perez's complete game shutout the other night, that watching him succeed makes being a fan worthwhile. Rangers fans had been following him since he first pitched in the Northwest League as a 17 year old in 2008. The Rangers challenged him with aggressive assignments, and he struggled a lot, to the point that a lot of fans were ready to write him off, or at least dismiss him as someone who wouldn't be any more than a potential back-end starter. But at some point in 2012, the light came on, and he had a very nice rookie campaign last year. He's been great out of the box in 2014, and a lot of the success seems to be a matter of confidence and trusting his stuff. The contract extension the Rangers inked him to in the offseason will pay him $32.55 million through 2020 if all the options were exercised, and right now, that extension is looking like a steal. 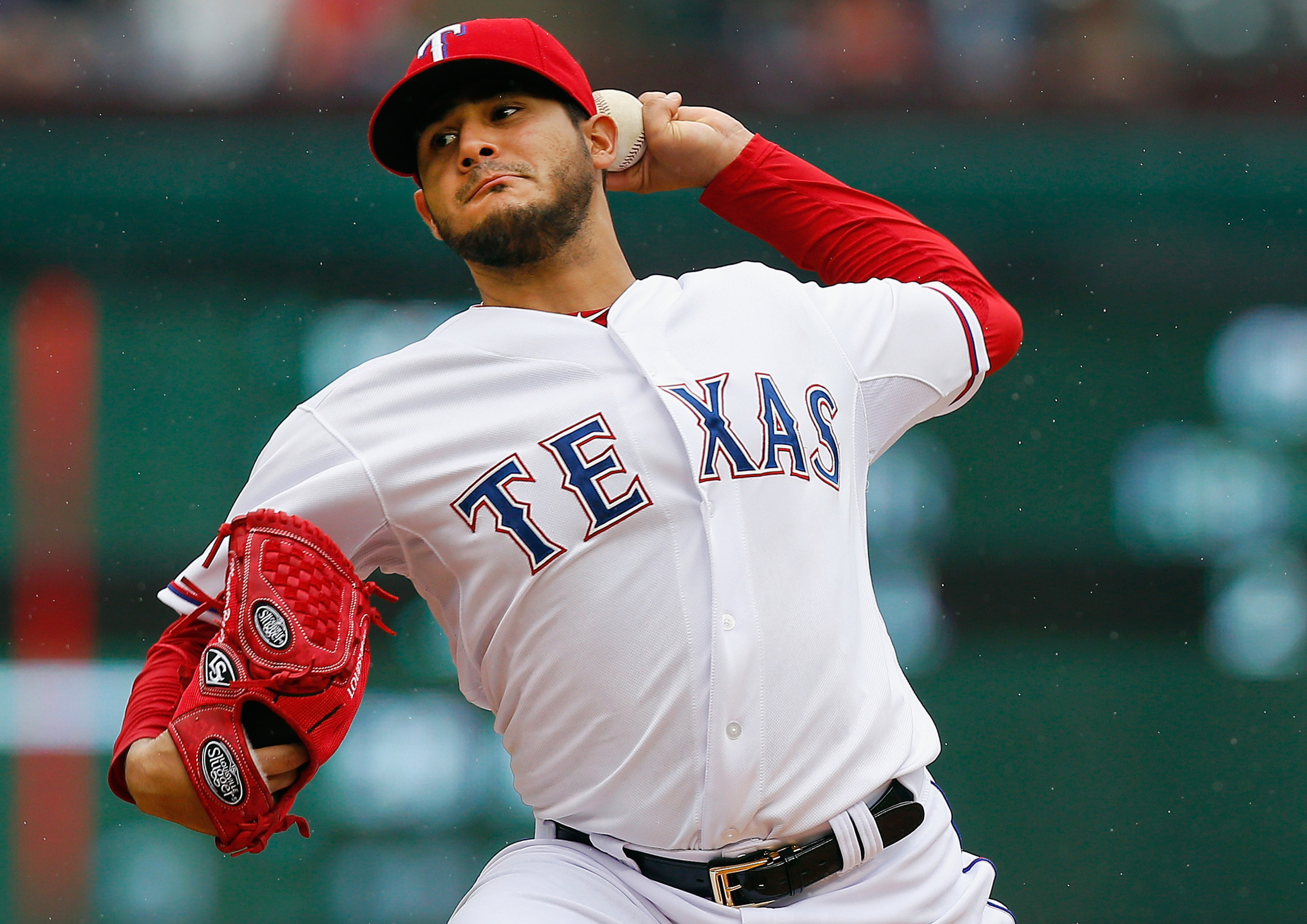 Martin Perez is a young pitcher who is exceeding expectations while pitching on a team-friendly deal that buys out his arbitration years. Sounds like he'd fit right in on the A's.

4. KOUZ!!! Is former Athletic Kevin Kouzmanoff a different hitter this year, or is he just on an early-season heater? And where does he play, if at all, when Beltre returns to action?

AJM: Kouzmanoff has been a hot topic of discussion among Rangers fans. I'm of the view that he's someone who is just off to a hot start, though if he keeps this up, he'll likely see a fair amount of at-bats at DH once Beltre returns -- right now, Mitch Moreland and Michael Choice are platooning at DH.

5. Another former Athletic, Donnie Murphy, has been manning second base in the absence of Profar. Can you please express your feelings about him in the form of a haiku? A limerick would also be fine.

6. Which of J.P. Arencibia's stats do you think is more representative of his value as a hitter -- the .255 career OBP, or the .195 career isolated power? That is, are the homers worth the extra outs he makes? And, between him and Robinson Chirinos, which one is more likely to stick around when Soto returns, or is that yet to be determined?

AJM: Arencibia had a bad spring training, to the point there was talk, before Geovany Soto went down, that Robinson Chirinos might beat him out. That has carried over into the regular season, with Arencibia being brutal offensively at a level that is rarely seen. I think there's still some upside there, but Chirinos is starting to get the bulk of the playing time, and unless Arencibia turns it around significantly before Soto comes back, I could see Chirinos sticking as the backup while Arencibia is sent down.

7. Through it all, the Rangers are still holding serve with an 11-8 record. How dangerous will this team be when everyone gets healthy?

Jim Adduci to the disabled list, Luis Sardinas up

Jim Adduci to the disabled list, Luis Sardinas up

AJM: I thought this was an 89-93 win team coming into the season, before the injuries turned the roster into a M*A*S*H unit. I still think this is a team that should be able to end up in the low-90s, if they can avoid any more serious injuries, and if Colby Lewis and Robbie Ross can continue to provide quality innings for the rotation while Derek Holland is working his way back. We also know that Jon Daniels isn't afraid to make a move at the deadline, though at this point, I'm begging ... please, no more trades for Cubs pitchers! I think this team is similar to the teams from the last few years ... solid overall, and a legitimate threat to win the AL West.

8. Texas made a deal with the A's last winter, sending Craig Gentry our way in return for top prospect Michael Choice. Now that you've gotten a first impression of Choice, are you excited about his future? And how disappointed, if at all, were you to lose Gentry?

AJM: Losing Gentry was disappointing. He was a fan favorite, and a useful bench piece. I believe the Rangers felt that he was not durable enough to be an everyday player, and so were willing to move him to get someone with upside that they really liked. Choice had a huge spring training that ended up winning him a job on the Rangers' 25-man roster, and while he has cooled down since the season started, he did have a big game-tying pinch-hit home run in the 9th inning recently. I see Choice as someone who has a good shot at providing the Rangers with league-average production for the next few years, while earning the minimum.

9. The nickname "Kitten Face." Thumbs up or thumbs down?

AJM: Thumbs down. No question.

The series starts tonight. First pitch is scheduled for 7:05 p.m., Straily vs. Darvish. Kevin Kouzmanoff is in the starting lineup for the Rangers, but Yoenis Cespedes is sitting for Oakland -- likely because of the bruised heel that knocked him out of Sunday's game early. At the very least, when Milone starts on Tuesday, he should be very happy to see Beltre's absence in the lineup; Texas' third baseman is 7-for-17 with a pair of homers against the southpaw.