It appeared the Athletics would end up leaving far too many men on the bases, but ninth inning heroics from Jed Lowrie, Josh Donaldson, Yoenis Cespedes, Alberto Callaspo, and Josh Reddick allowed the A's to pull off a 4-3 win over the Astros.

Share All sharing options for: Game #17: A's walk off, Kazmir goes eight, everybody gets ice cream

For the first eight innings, it seemed like it was just going to be one of those days. The Athletics had ten hits and drew three walks through the first eight innings, but a combination of excellent Astros defense and inning-ending pop-ups kept the A's to just one run. Meanwhile, Scott Kazmir pitched efficiently, getting through eight innings in 106 pitches, but the Astros put up a run in each of the third through fifth innings. After eight, the A's were down three to one. 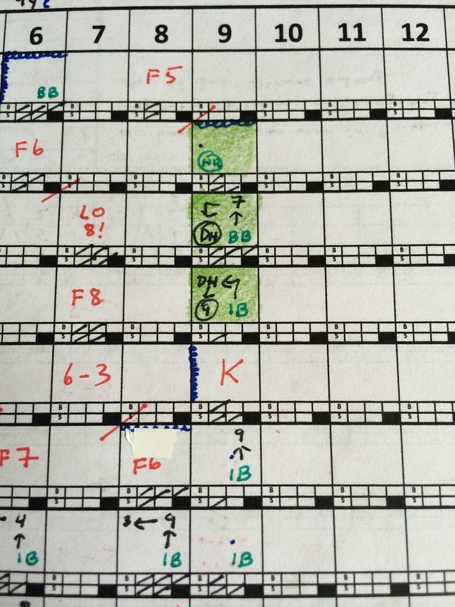 But then Chad Qualls, not having pitched since April 11, came in to face Jed Lowrie. Lowrie led off by pulling a 1-2 pitch over the fence fair of the right field line bringing the score to 3-2, sparking to life the 33,166 in attendance. Josh Donaldson drew a walk to bring the winning run to the plate. Yoenis Cespedes then singled to right to move the tying run to second. John Jaso came in for Derek Norris, but he did his best 2012 ALDS Game 4 Chad Cliff Pennington impression and struck out.

Alberto Callaspo, celebrating his thirty-first birthday, drove a ball up the middle to drive home Donaldson to tie the game. Finally, Josh Reddick, two-for-four to that came up. On a 1-2 slider, Reddick drove another line drive to center field that, but for Cespedes scoring the winning run from third, would have been a double. Reddick got the walk-off pie from Coco Crisp, who pied him first with the left hand, waited for Reddick to wipe his eyes, and then hit Reddick with another pie in Coco's other hand.

Days like today are why I'm glad I'll be sticking around Oakland for a while...(we had ice cream in the clubhouse after the game!!!!)

After Jose Altuve grounded out to lead off the game, Dexter Folwer hit a ground ball to third that Josh Donaldson, on his bobblehead day, unfortunately bobbled. Kazmir got the rest of the outs himself after seeing that, striking out Jesus Guzman and George Springer. 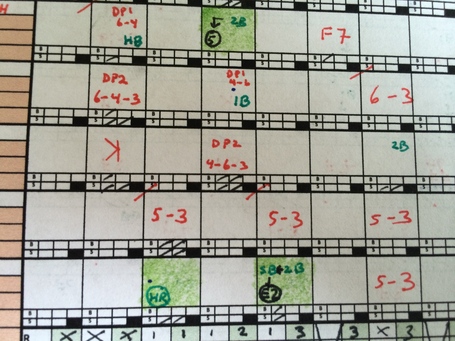 In the third, Kazmir got number nine batter Jonathan Villar to 0-and-2. Villar hit a fly ball that just carried and carried and carried toward the center field wall with Gentry backpedaling toward the right power alley fence until it was gone just a little bit over Gentry's glove. With a better-timed jump, Gentry may have been able to make the out, but it would have been a very good play. Astros led 1-0.

In the fourth, Chris Carter hit a first-pitch double to right, and then Matt Dominguez hit a single to Craig Gentry in short center. Gentry made what would have been a great throw home except that the ball ticked the bottom of the mound, causing it to roll quickly through the grass, and Carter was just safe. The Astros led 2-1.

In the fifth, charge the run to Derek Norris. Jonathan Villar reached on a double, and with the right-handed Dexter Fowler batting, attempted to steal third. Norris received the low pitch and threw the ball a good eight feet right of the third base bag into left field, allowing Villar to score the Astros' third run to lead 3-1.

Out of the thirty batters Kazmir faced, twenty at-bats ended on zero- or one-ball counts. Kazmir faced only four three-ball counts in his eight innings, and walked nobody. He struck out five, and of the twenty-four balls in play, he got fifteen ground ball outs, including two double plays. Kazmir is four-for-four on quality starts in 2014.

Dan Otero was the A's only reliever, and was credited with the win. Otero led off the ninth by giving up a double to George Springer and walking Chris Carter. However that sinker came back, getting Dominguez to ground into a 6-4-3 double play, and then freezing L.J. Hoes to end the top of the ninth.

Every starter reached base today. In the third, Daric Barton hit a double and would score on Craig Gentry's immediately following double. Gentry stole third base with nobody out, but sat there as he bluffed on Lowrie's flyball to short center, watched Donaldson strike out, and walked away when Derek Norris flew out to left.

Nick Punto with 3-for-4, and game-winner Josh Reddick went 3-for-5, with just one strikeout. The Athletics overall struck out only four times today. 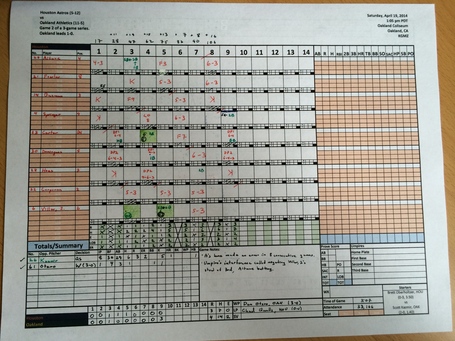 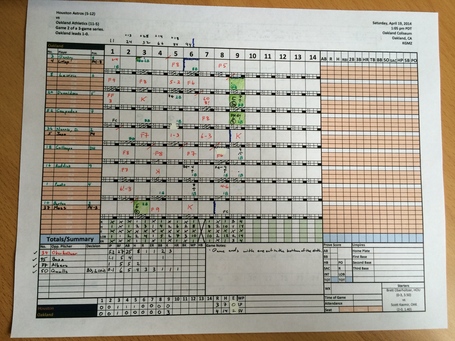 Coming off of last night's laugher, the A's second walk-off victory feels just right today. Scott Kazmir's eight innings were huge for a bullpen coming off a heavy load of work last week, now giving much of the bullpen several days of rest. That the A's have now made an error in eight consecutive games is of concern. Though our standing was not in danger today, the A's continue to hold the best record in the American League, and are on pace to win 114 games. Extending that extrapolation, we will also lose 19 games to Felix Hernandez.

The A's go for the sweep against the Houston Astros tomorrow at 1:05. Lev Facher will have your thread. Once again, the A's win on a ninth-inning walk-off, four to three.