With the A's and Astros squaring off for three games, I asked David Coleman of The Crawfish Boxes a few questions about his favorite team. Here's what he had to say!

Share All sharing options for: Astros Series Preview: Q&A with David Coleman of The Crawfish Boxes

The Oakland Athletics survived a brutal series in Anaheim against the Angels and finished their road trip with an impressive 7-2 record. Granted, that mark could have been 8-1, but it also could have been 5-4 if not for a couple of late-inning comebacks against the Halos -- so, all things considered, it's difficult not to be satisfied with the final tally. The A's enter their three-game series against the Houston Astros with the best record in the American League (10-5) and the best run differential in baseball (plus-20). The rotation finally hit a snag when Dan Straily had a disaster start on Tuesday (the team still won the game anyway), but Oakland will send its three best starters to face the Astros in the Coliseum. The next four series are all against the Astros and Rangers, so get ready to see this Houston club seven times in the next 10 days. Not that any A's fans are complaining.

Houston will counter Oakland's three best starters with its own top trio. Oberholtzer in particular could give this team problems because he tends to keep the walks down, and drawing free passes has been a major component of Oakland's offense so far this season (second in MLB with 68 bases on balls). Peacock, who the A's traded to the Astros in the Jed Lowrie deal, will make his first start of the season; the last time we saw him (last Sept.), he dominated Oakland for seven innings and allowed only two runs while striking out nine and getting unbelievable movement on his pitches.

1. The big news in Houston is the promotion of George Springer, who made his MLB debut on Wednesday. Who is he, why is he important, and what should A's fans expect to see out of him this weekend and in the future?

Astros to call up George Springer

Astros to call up George Springer

DC: Springer is the first of a wave of talent from the Astros' minor league system. He's a flawed player who nevertheless plays like a star. He can do everything except hit for average. He'll make great defensive plays and he'll hit the occasional home run.

Springer himself doesn't help the Astros much right now. He might never become a great major leaguer. But, Houston is about to have plenty of impact prospects pop up on the roster. Some of those guys are bound to work out, which should help the Astros become a team that can make some noise, instead of lose 100 games.

2. The A's are scheduled to face three talented but unheralded starters in this series. In the opener on Friday, they'll see Jarred Cosart, who posted a 1.95 ERA in 60 innings last year despite more walks than strikeouts. His peripherals already look much better this season -- has he changed something, or is this simply a 23-year-old starting to figure it out in the majors? How good can he be?

DC: Cosart has always been more potential than results. In the Futures Game, he flashed a big fastball and impressed all the scouts who watched. He just rarely did that in actual games.

Fast foward to 2013 and Cosart did the same in his major league time. He flashed great stuff, but wasn't consistent with it.

The biggest problem for him came in his delivery. It had too many moving parts and wasn't repeatable enough. New pitching coach Brent Strom seems to have worked wonders with him, however, getting Cosart to consistently repeat his delivery through three starts.

3. Next is Brett Oberholtzer on Saturday. His stats and style suggest that he's sort of like Oakland's Tommy Milone but with a 90mph fastball -- he's got a low walk rate, a great K:BB, and a heavy reliance on a curveball and a plus change-up. Is that a fair comparison? And can he be an above-average starter in the long-term?

DC: Oberholtzer was one of the parts of an underwhelming Michael Bourn trade with Atlanta. He's never been impressive, but showed great poise last season in a brief stint in the rotation. He outperformed his peripherals a bit last year, but if his K rate rises to his minor league levels, he should be fine. He changes speeds well, too, which is what Strom preaches.

4. In the finale, we'll see Brad Peacock, a former A's farmhand. I was really high on him all winter based on his excellent second half, so I'm excited to see him start. Do you share my optimism, and if so, why? And does the fact that he's starting mean that the Lucas Harrell experiment is over, again?

DC: Harrell is gone. He's been designated for assignment and I don't get the sense Houston will be keeping him around in Triple-A.

Peacock, on the other hand, should probably have landed a rotation spot out of spring training. He's another guy who's results haven't always matched his stuff. That being said, he has a lot of believers among the Astros fan base and his power stuff should be a nice offset to all the ground ball specialists Houston has in its rotation.

5. Three Houston relievers have earned saves already this year. Are the Astros trying a closer-by-committee as well, or has this just been a matter of circumstance? How is the bullpen shaping up overall?

DC: The probable closer-in-waiting is the oft-injured Jesse Crain. Until Crain returns from the DL, Houston is going with a closer-by-committee approach. They signed a bunch of free agents in the offseason to fix a historically bad bullpen. It's worked to some degree, but leaves a lot of average to above-average guys fighting for that elite job.

6. The lineup is off to a slow start, but there are a lot of talented and underrated players in there. Which position player has you most excited that he'll open some eyes around the league this year?

DC: That guy is probably Matt Dominguez. He may never hit enough to be an impact player, but his combination of power and defense is intriguing. If there's one guy on this roster who could go "Josh Donaldson" on the league, it's probably Dominguez. 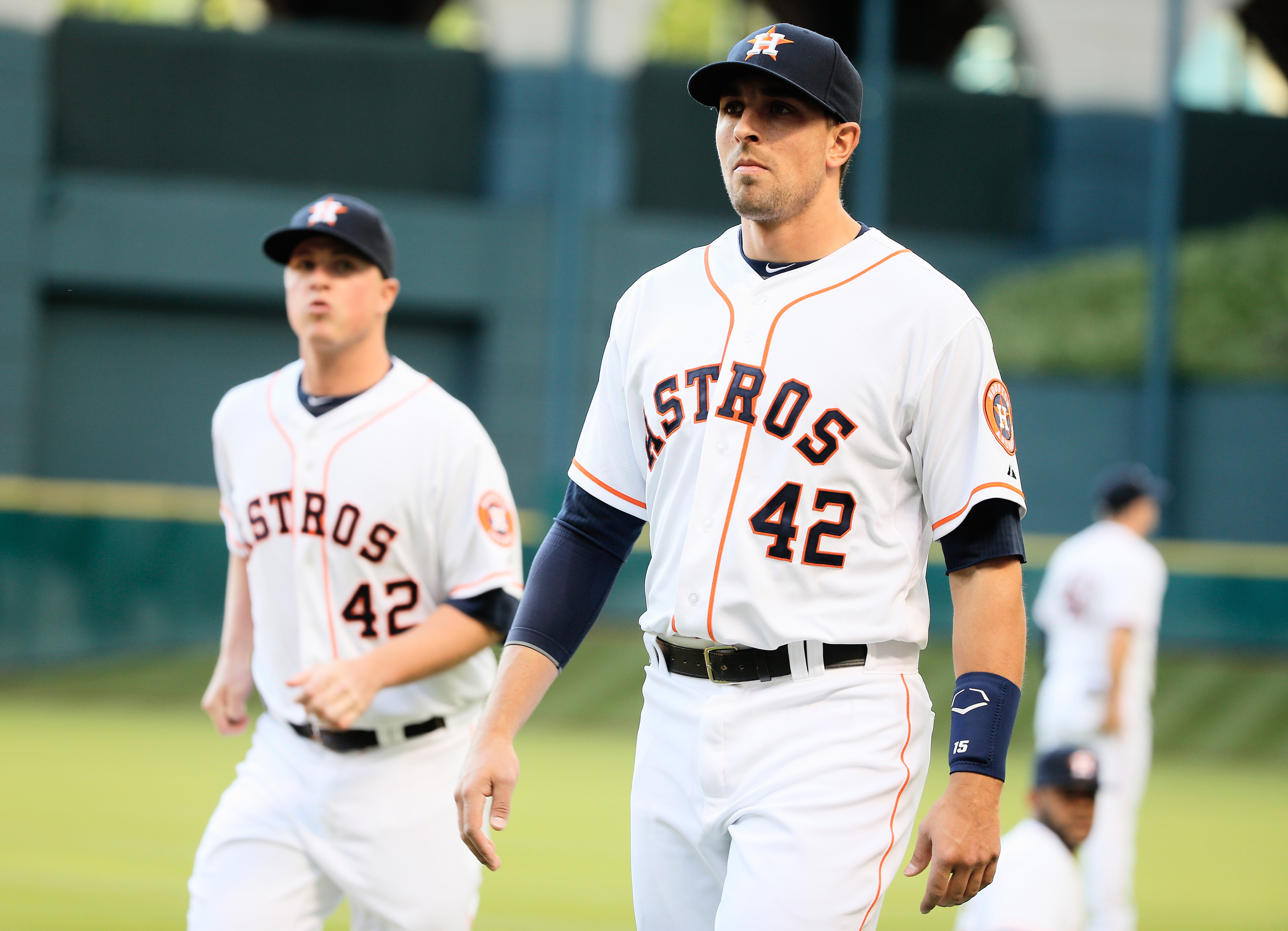 7. How is the first base platoon of Marc Krauss and Jesus Guzman working out? And what are the chances that top prospect Jonathan Singleton makes a meaningful appearance in 2014?

DC: It's not been working very well at all. Both players are showing some power, but neither can make contact consistenly enough to do the position justice. Chris Carter is also in that mix, but is struggling with the same contact issues.

Singleton probably needs at least half a season in Triple-A to get his feet under him. The more likely immediate help is huge first base prospect Japhet Amador, who would have had a chance to win the job outright in spring training if not for issues at home in Mexico.

8. As you well know, the Astros are working on three straight seasons with over 100 losses. Is this the year they snap that streak? And what do you think is their realistic best-case scenario?

DC: Hopefully, 2014 will be a transition year, marking the barrier between mediocrity and contention. The Astros will still lose a ton of games, but at least they'll do it with prospects up and down the lineup. A realistic goal for this season is probably 70 wins, with 65 being the most probable outcome. So, yes, they probably avoid another 100-loss season. But, it won't be by much.

9. Does the name L.J. Hoes still make you giggle, or have you mostly gotten over that now?

Thank you, David, for participating in the Q&A!

The series starts tonight. First pitch is scheduled for 7:05 p.m., Gray vs. Cosart. And there's no Chris Young this year, so someone else will have to step into the role of "hitter who inexplicably destroys the Astros beyond all reason." (... but hopefully not "hitter who comes within inches of a walk-off homer against Houston in back-to-back games.") I'm looking at you, Josh Reddick.