Opposite field hitting: The key to success?

Does hitting the opposite way improve a team's chance to score runs? Let's take a look.

Share All sharing options for: Opposite field hitting: The key to success?

Want a good drinking game? How about every time Ray Fosse says "the hitter should look to go the opposite way here" have a drink. Be careful, you may quickly go through your stash of booze and/or get seriously inebriated. But a thought occurred to me after hearing Fosse say these words for the 10 trillionth time: could he be on to something? Does a team's ability to hit to the opposite field actually matter? Should EVERY SINGLE OAKLAND HITTER try to shoot the ball the opposite way? I thought I would try to find out.

Here's what I did. I took the weighted runs created (wRC) data for every ball hit to opposite, center, and pull fields since they started keeping the data in 2003. Then I compared how well wRC for these hits correlated to a team's ability to score runs. Here are the plots of the correlations. 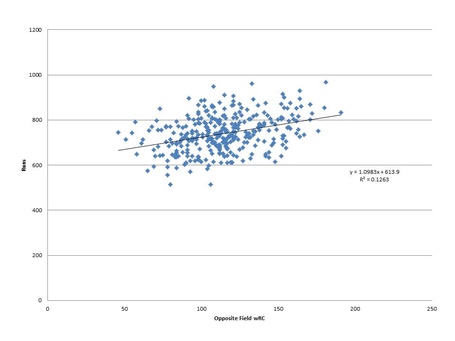 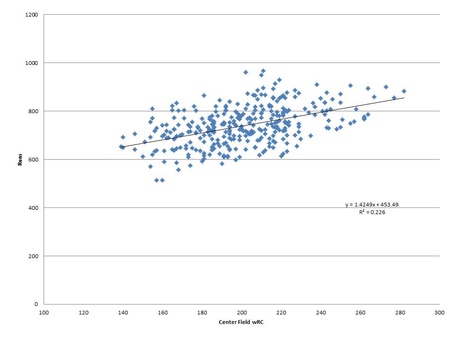 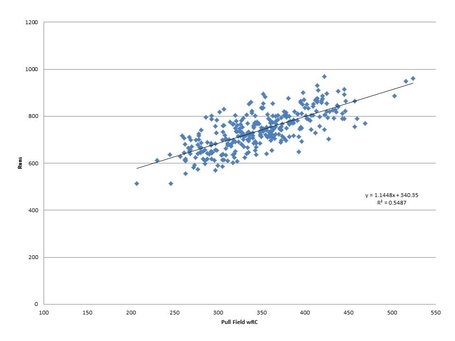 So we see that opposite and center field hits aren't really good predictors of how many runs a team will score. Pull field wRC is a much better indicator. If you want to score runs, you need to rack up some wRC to the pull side. Hmm. That's strike one on Fosse.

But maybe teams need to spread the ball around. You know, not hit too much to the pull side. Keep the defense honest. So let's correlate percentage of balls hit to all fields with runs scored. 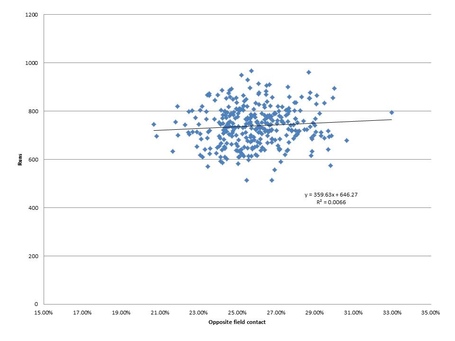 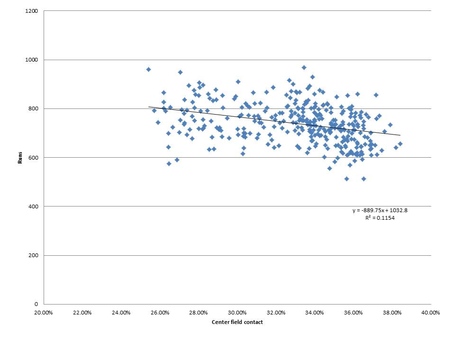 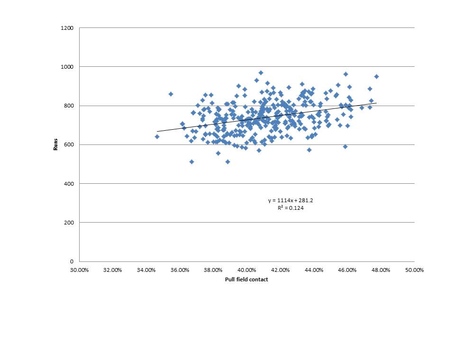 Nope. It doesn't seem to matter if teams hit more balls to opposite, center, or pull fields. Strike two on Fosse.

Let's give Fosse one more chance. How about just getting a hit. Runner on third, tie game, just need a hit. Should the hitter try to go the other way? Let's look at the batting average for balls hit to all fields.

Nope. The best chance of getting a hit is pulling the ball.

How about in terms of the Oakland A's? Are the A's constructing teams to hit more to the opposite field? Absolutely not.

The A's haven't gotten much production out of hitting the other way, the last two years especially (division winning years I might add). If anything, Oakland A's hitters may be worse opposite field hitters. Check this out.

Or it could be that the Coliseum is a difficult place to go the other way. Considering the Coliseum is a difficult place to hit period and that hitting the other way is intrinsically more difficult, I might go with the latter. Especially since opposite field contact tends to produce flyballs (55%), flyballs that find gloves in the spacious Coliseum (great article on why opposite hits tend to be flyballs here). Or both, and Beane and Co. know this and have constructed the team accordingly. Take a look at the players on the team the last couple of years and their career wRC to all fields.

Yep, it looks to me like Beane is constructing the roster with guys who can pull the ball. Or maybe it is just a coincidence. Regardless, if a hitter is going to be successful in Oakland, hitting the other way is fine, but he better be able to pull the ball. No matter what Ray Fosse says.