What's wrong with the Athletics' bullpen?

The A's were supposed to have one of the best bullpens in baseball, but the closer-by-committee isn't getting the job done. What gives?

Share All sharing options for: What's wrong with the Athletics' bullpen?

This is not how things were supposed to go. Sure, the Oakland Athletics are 10-5 and are the at the top of the American League, much less their division. But their biggest weakness so far is the thing that was supposed to be their biggest strength: the bullpen. Billy Beane dumped a ton of money into the pen to add Jim Johnson and Luke Gregerson to an already solid core, and the relievers were supposed to shorten games behind a group of six-inning starters.

Instead, the A's are tied with the White Sox for the Major League lead in blown saves with five. The White Sox make sense at the top of that list, because they traded their 2013 closer, Addison Reed, and replaced him with a clubhouse attendant. To add insult to injury, Grant Balfour has converted all four of his save opportunities for the Rays without allowing a run. We're not here to play the hindsight game, though, so let's just note that he's walked five batters in 4⅔ innings and move on with the present and future.

Let's start by looking at where the blown saves came from:

The first thing we notice is that the five blown saves took place in only four different games, and two of those were salvaged with A's victories. Still, though, that means that the pen has failed to hold a lead on five different occasions just 15 games into the season. The next thing to note is that the relievers have successfully converted only four saves. In other words, in the eight games in which they've been handed a slim lead, the pen has lost or extended as many as they have closed out cleanly -- and that's not counting Johnson's Opening Day loss when he entered a scoreless game in the ninth. That's just not going to cut it. Finally, there hasn't been just one culprit; all three of the top relievers have blown at least one lead, and Otero sort of has as well.

So, what's the problem? Here are a few ideas

Jim Johnson Out As Athletics' Closer

Background on how we arrived at the closer-by-committee

Jim Johnson Out As Athletics' Closer

The A's made a big splash when they announced that they would go without a designated closer. Teams often do that on a short-term basis while they identify a new full-time ninth-inning man, but the A's seemed to be in a position to try the committee for the long haul if it worked. Many people hoped that Oakland could finally break the conventional wisdom and show the world that a tag-team can work, and many others insisted that the strategy can't succeed because relievers need consistency in their roles.

I don't think that we've got enough data to make any kind of judgment on the efficacy of the closer-by-committee. It's really only been in effect for a few games, since Saturday marked the team's first save opportunity since Johnson was publicly demoted from the full-time role. Therefore, the committee has only blown two saves, albeit in a total of three opportunities. I can't rule out that the committee won't work, but it's too early to say that it hasn't worked. Besides, there are a couple of confounding variables to consider. For starters...

Those two blown saves? The first came on a two-run home run by Mike Trout. The second came on a rally that consisted of back-to-back singles by Trout and Albert Pujols, followed by a dinky RBI groundout which was hit too slowly to turn into an inning-ending double play. If your failures are entirely the results of Pujols and Trout hitting well, then you should stay calm and see what your pitchers can do against someone other than two of the best hitters of this century. Furthermore...

The relievers are already getting overworked

The A's have played 15 out of 162 games. For the sake of simplicity, let's round that up to 10 percent. Here is the workload already incurred by the top relievers:

If you want to extrapolate those stats into a full season to see how quickly the work is mounting, just multiply them by 10. They aren't ridiculously out of the question, but they do show that the pen has been taxed heavily in the early going. The top three guys are appearing in over half of the team's games, and Gregerson is on pace to throw about 100 innings.

Of course, these things can ebb and flow based on need. And that's just the problem -- with the rotation's lack of endurance and the offense's tendency to score just enough to keep both teams in the game, the call has come from Bob Melvin quite often recently. Doolittle has appeared in three of the last five games, and Otero has pitched in three of the last four. Gregerson has entered four of the last five games. With Ryan Cook and Fernando Abad being used in shorter, situational roles, Melvin has had to turn to his top guys with alarming frequency. What's worse, their recent failures have required their teammates to put in more work than should have been necessary, which forces Melvin to overuse them on consecutive days, which makes them less effective and leads to more blown leads that require more extra work, all in one vicious cycle. Given that we're really only talking about the last few days here, I think it's safe to say that fatigue played a large role in the late-inning meltdowns against the Angels.

What this means to me is that Melvin needs to plan ahead better in the middle innings. He can't futz around bringing in Abad to face one or two batters, searching for LOOGY and ROOGY matchups. He needs to avoid leaving himself in a position where he needs the same guys to come in over and over in the eighth and ninth innings, because this team will likely be playing a lot of close games this year and he can't be using five relievers in each contest. The benefit of having this many ace firemen is that you don't need to rely on the same steady hand every night; however, that bonus goes out the window if you just move on to relying on all of your steady hands every night.

Spread the innings around a little more and keep the arms a bit fresher. Maybe Abad blows an extra lead in the seventh here and there, but it'll be worth it if the other hurlers blow fewer leads in the ninth. Or, let guys like Otero and Johnson throw two innings at a time rather than using each for an inning and then needing to call on both of them again the next day. But don't burn three relievers before the ninth and then leave yourself scrambling when the game goes to extras. This team isn't built for the luxury of situational pitching matchups in the middle innings. 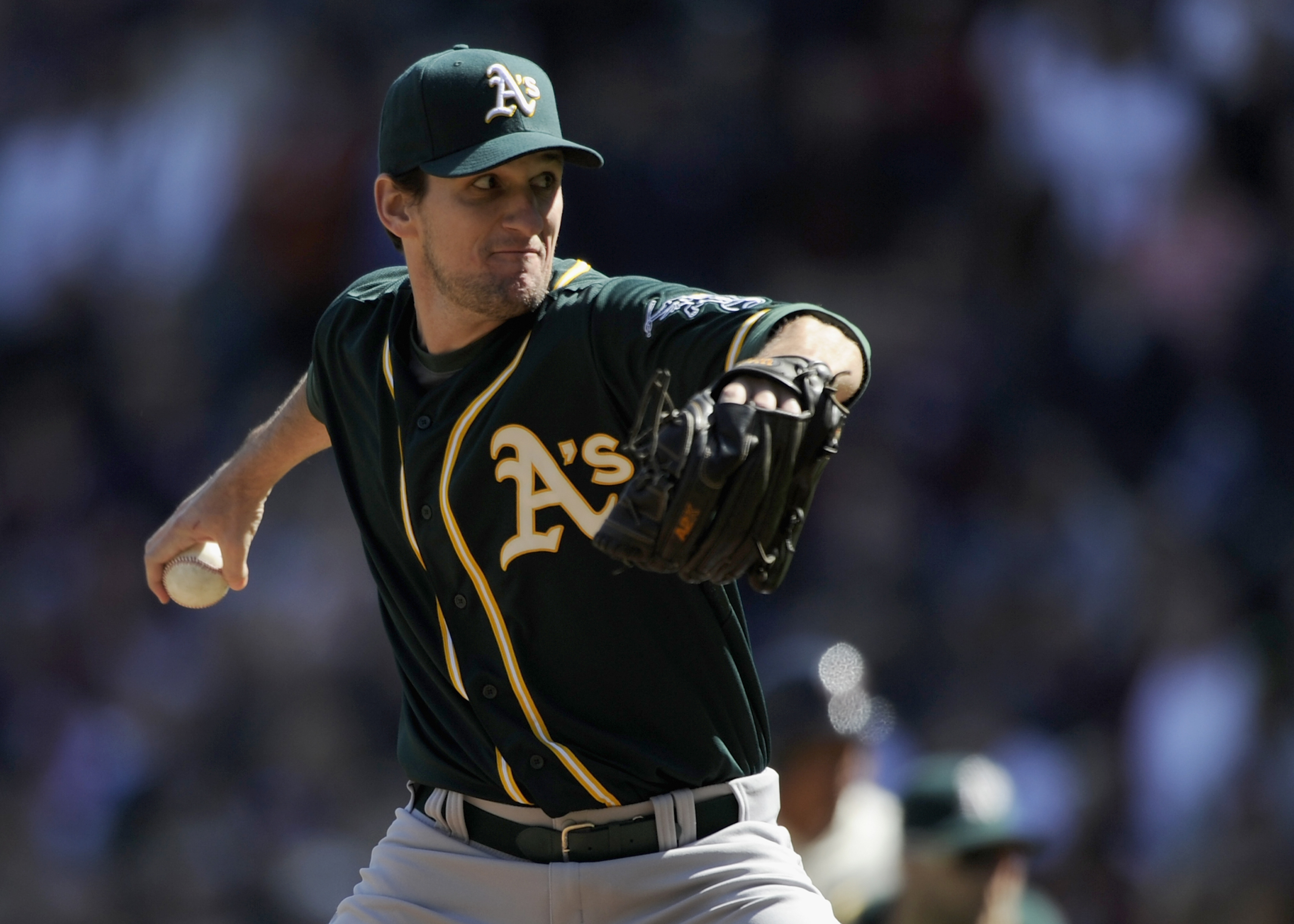 Should Dan Otero be throwing two innings at a time so that the closing committee can stay fresher?

Is it time to panic?

No. First off, Oakland relievers still rank sixth in the Majors with a 2.72 ERA. Second, even with the bullpen dropping a giant deuce on everything it touches, the team is still in first place. Things could be worse. Third, each individual pitcher is still a talented guy. We've seen enough of Gregerson's slider to understand why he's been so successful throughout his career, and Johnson has already settled down after his poor start (last three appearances: five innings, no runs, two hits, one walk, five strikeouts). Doolittle and Cook, while not perfect, have shown that they are generally reliable over the long haul. Otero is picking up right where he left off last year. One way or another, whether one of them is anointed the permanent closer or not, they will eventually turn things around and do a better job protecting leads.

There might not be anything more frustrating than watching your bullpen give away a lead at the end of the game. However, it happens to every team now and then, and the fact that it's been a huge problem for Oakland so far is most likely a blip on the radar. The only question is how long it will take the committee to recover and become the strength it was supposed to be.