Designated For Assignment: Who Do YOU Want to DFA?

I do not advocate sending anyone down just yet, but if the A's did decide that they want a change based on poor performance, who do you think it should be?

Share All sharing options for: Designated For Assignment: Who Do YOU Want to DFA?

It's a game of optional waivers.At many points this off-season, I advocated keeping Daric William Barton ( .277 OPS in 2014) as the 25th man. This was not because he was the 25th best player on the A's but because he had other things going for him. I thought (60/40) he would be picked up off waivers after a very good September 2013. I also thought Barton fit the roster better. And I also thought keeping Barton to start the year was more important over the whole season than having Steven Guy Vogt start the year in Oakland.
With Barton's defense ( #1 in MLB at 1B UZR/150 in 2010-2013) ( Link )
and also with his Total Probable Exposure Prevented ( Link 2 )
Barton "fits" on the A's much better than Vogt did. Having the best defender at a position as a back-up ( and the only true 1B) is one way why. Allowing Brandon Douglas Moss to play 5th OF is another.
There is also yet another reason to keep Barton. Barton-Punto-Gentry-Norris; all coming into the game (if they are not already) in the 9th inning with a A's lead could allow the A's to suppress runs per inning by 10-15% with defense alone. This hypothetical four man (super defender) ninth inning platoon could possibly be expected ( saber-metrically) to win the A's up to an extra 5% of their games this year vs an A's team that did not employ this strategy.*
*Say 95 instead of 90 wins. See ( Link 3 ) for a first taste on how.

Back to the beginning of the season. The DFA choice at the time ( in my mind) was between Barton and Vogt. Eric Sidney Sogard (.572 OPS in 2014) was a dark horse, since he had an option as well. The A's could platoon Nicholas Paul Punto and Alberto Jose Callaspo and probably get away with it for a month if needed.
Since that point of time, with his horrendous start, William Joshua Reddick ( .294 OPS in 2014) has also entered the equation as another seemingly reasonable choice to be sent down at some point (sooner or later) since he still has "options". And yes small sample sizes of two weeks can matter. Bad years start with bad months start with bad weeks. Players with targets already on their backs do not do themselves any favors with slow starts. They are like a wounded animal with an arrow stuck and bleeding through their leg.
IF the A's decide to send someone down sooner or later because of poor performance in the next few weeks, and the A's have several poor performing players to choose from to send down, I want to know the best choice at this point of the season. To help decide, I'm going to explain normal options and also optional waivers. Looking at some of the more obscure option rules will help narrow down the best choice. First; normal options:
Next, Optional Waivers:

What this means is a smart front office, especially in the same division, should claim any A's player with optional waivers, forcing the A's to pull him back or lose him. Why allow your division rival to do whats best for themselves? And if the other (claiming) A.L. West team gets lucky, ( say if the A's decide to promote Micheal Taylor long term, or if a different injury takes precedence or if the A's make a trade for a better player) the A.L. West team now actually gets Josh Reddick to boot. It's a c&% block followed up by a &^$k thank you.

Now that we have looked at both sets of waiver rules, lets see how that applies to A's players. 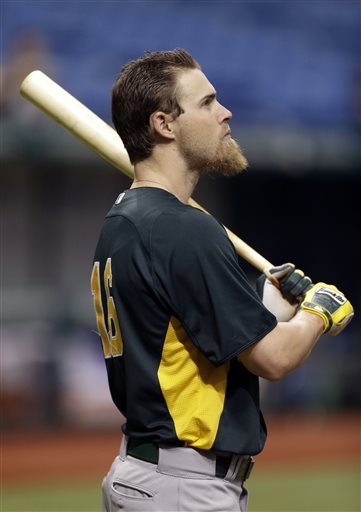 Optional Waivers will be needed after April 26th.

Where does all this leave the A's? I do not advocate sending anyone down just yet, but if the A's did decide that they want a change based on poor performance, Reddick and Sogard; even though they have options, really do not.

The A's can try to option Reddick/Sogard with seemingly little consequence as optional waivers are revocable (once), but other teams in the West (Texas especially) probably would (and absolutely should) block the A's from doing this, and Texas could also time it right to steal optional waiver players away a smaller percentage of the time. Having as deep a roster as the A's have means other teams should absolutely be taking shots at the A's 26th best player. And the 27th. All year long. 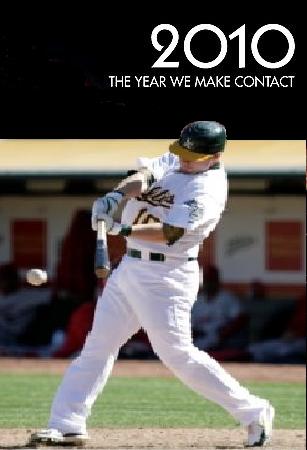 All else being equal ( which they are not) Barton is the best choice, at this point in time, to try and send down for the DFA sneak and keep. His 2014 start has been bad enough, and he costs twice as much as a normal D.F.A. player off the scrapheap. Even with SSS of just a few weeks, the A's could have a good chance of slipping him through waivers for the 23rd time.

Now that Barton has gone from say ( 60/40 would be claimed) to say (40/60 he would not get claimed), I am now fine with the A's trying to slip him through and bring someone else up with his continued extreme struggles the next week or two.

If he makes it through, he is still all those original good things mentioned, sitting in AAA, waiting for a hot streak to help the A's. Remember though, Barton would be claimed on normal waiver rules, and those are not revocable.

Who do you replace Barton with in SAC? The most likely candidates : 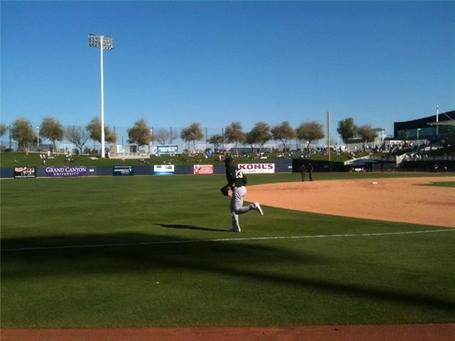 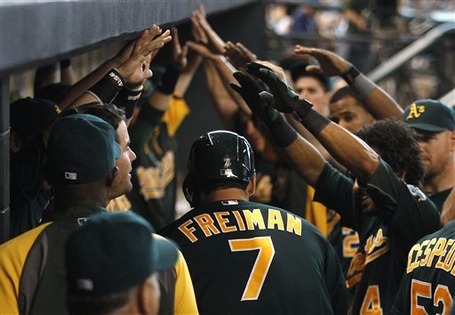 Nathan Samuel Freiman .726 OPS.900 OPS vs LHPEven if Freiman is a better platoon choice on offense at 1B, I felt from day one, Nate Freiman should play every day at 1B in AAA to develop his defense and develop his hitting vs RHP. I would rather have Moss play every day or have Callaspo cover 1B than deviate from that plan for at least a few more months and probably longer.

He is not a viable option at this time. With the Vogt injury, keeping Barton rather than Vogt to start the year has already worked out for the A's as far as depth is concerned. The A's got a free dice roll that Barton would start off hot. Enough free rolls and they will hit on a few.

An another Vogt note, the A's may not be able to take advantage of Vogt options next year, as he will then be an optional waiver player.

OF/1B Shane Aaron Peterson (.874 OPS, 130wRC+), in perhaps his swan song year for Oakland, and OF Jacob Dwayne Goebbert, (180wRC+) would be candidates later in the season (assuming Samual Babson Fuld is claimed the next few days, which I do).

Well Athletics Nation. Who do you want to D.F.A.? Who would you call up? Did something I say change your mind?

Decent Exposure. Is Barton the second most important non-starter on the A's by Total Probable Exposure Prevented? speedchaser9 makes a great case. But if Barton is such a player, the easiest way to improve the A's could be to replace Barton not by a player from AAA, but with a (relatively minor) trade getting someone that fits the A's even better than him.