The A's are in Anaheim for the second of three contests with a chance to win the series today.

Share All sharing options for: Game Thread #14: A's vs. Angels

Greetings A's fans! Twice in a row the A's rode very strong pitching and a couple of longballs to victory against an AL West rival. Today promises to be another pitchers' duel, featuring Dan Straily (1-1, 2.77 ERA) vs. RHP Garrett Richards (2-0, 0.75 ERA).

Richards started to look dominant last year as he began showing some control and some nasty movement. Let's hope the A's can be the first team to get to him in 2014.

Incidentally, Josh Reddick is batting .400 against him in 10 ABs, and Brandon Moss at .462 over 13 ABs. I know, batter vs. pitcher stats aren't predictive, but ownage is ownage and hopefully these two will go off. Callaspo's 3-4 yesterday makes it impossible for Melvin not to play him again.

Here are your lineups

For you admirers of Jaso, he is hitting leadoff - (graphic via @adriangarro on Twitter): 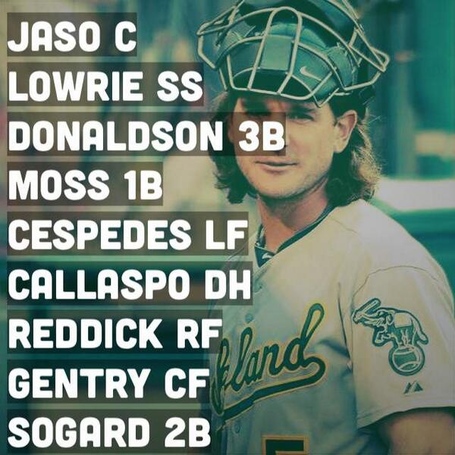