Each week, jfkoo's Oakland Athletics scorebook will bring you back to the stands at the Coliseum, in front of the television, or anywhere else baseball can be seen as far back as 2003. This week, the Athletics faced the Texas Rangers on April 15, 2006.

Share All sharing options for: This Week in Scorecard Stories #1: April 15, 2006

When the historian Doris Kearns Goodwin was six years old, her father bought her a bright red scorebook and taught her to keep score. Each day her father would go to work, and Doris would dutifully listen to that day's Brooklyn Dodgers game on the radio, keeping track of the game in her scorebook. Goodwin writes in Wait Till Next Year: A Memoir,

All through that summer, my father kept me from the knowledge that running box scores appeared in the daily newspapers. . . . I believed that, if I did not recount the games he had missed, my father would never have been able to follow our Dodgers the proper way, day by day, play by play, inning by inning. In other words, without me, his love of baseball would be forever unfulfilled.

Before learning how to keep score from the Wrigley Field Scorecard Extra in 2002, when I was fourteen-going-on-fifteen, Oakland Athletics games for my family were primarily a prelude to the main event, Fireworks Night sitting in the Coliseum outfield. Hence, my best memory of the game before 2002 is from Friday, July 5, 1996, when the A's scored thirteen runs in the first inning against the California Angels. That memory, of course, is missing that first inning because the main event was Fireworks Night, and my family settled into its plaza outfield seats just as the A's were wrapping up the first inning. I was eight years old. My family quickly abandoned its "Nothing happens in the first inning" attitude.

Otherwise, when I look back to accounts of the Oakland Athletics prior to the 2003 season, it never felt like I was there. And when I think back to the 2009 and 2010 seasons, when I didn't make any scorecards because I was away at UC Davis for school, all I remember is my general distaste for Bob Geren, but otherwise emotionally flat. 2003 is the year my love of baseball began to take hold, and I credit my scorebook for locking in the emotions I felt about the years I kept close track of the team.

The 2006 season started in the wake of a difficult 2005 offseason for the Athletics organization. First, soon after its second consecutive missed postseason, A's radio broadcaster Bill King passed away from complications after hip surgery. King served as lead radio announcer from the 1981 season, and the organization renamed their home radio booth in his memory.

The A's initially did not renew Ken Macha after the 2005 season, there being some thought that with Pittsburgh firing Lloyd McClendon, Pennsylvania-native Macha was holding out for more money thinking he could always walk to the Pirates. Macha had taken a team that had gone 103-59 under Art Howe in 2002 to 96-66, 91-71, and 88-74 in the next three seasons. That 2005 season was supposed to be a rebuilding year for the A's (remember Keiichi Yabu?), so it was a creditable performance. Some of Macha's moves that year, however, caused many, including his own players, to strongly question his abilities.

So it was quite a shock to see Macha get a three-year deal just nine days after the A's declared contract talks over and thanked Macha for his services. Whether this was a good move or not was a matter of great debate on Athletics Nation that day. The Juicy Fruit was back in the dugout, so grab an adult beverage (or not, I was 18 at this point), and enjoy this week's scorecard between the 4-7 Texas Rangers and the 5-6 Oakland Athletics! 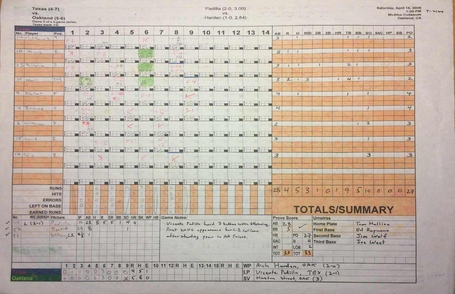 Harden made his third start in 2006 for Oakland, his second at McAfee Coliseum. Harden was coming off an injury-plagued 2005 where he missed a month between May and June, and did not make a start after August 19, returning to the bullpen on September 25, 2005. Harden performed admirably, getting through seven innings with a stat line of 3 hits, 4 runs (all earned), 5 walks, and 8 strikeouts. 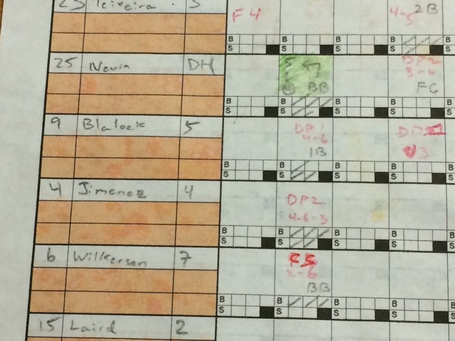 The Athletics Reply With Two 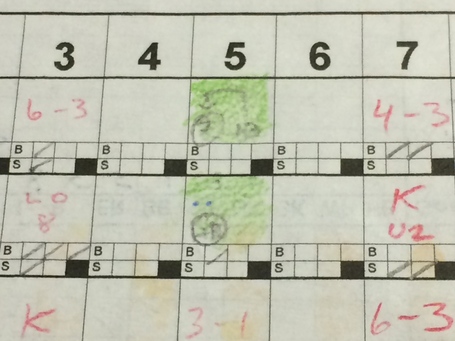 The Athletics, facing Vicente Padilla, would not respond until the fifth inning when Mark Kotsay reached on a first-pitch two-out single to right. Nick Swisher, in his sophomore season, blasted a 2-run home run to give the A's a 2-1 lead.

Harden Can't Shut Down the Rangers in the Sixth 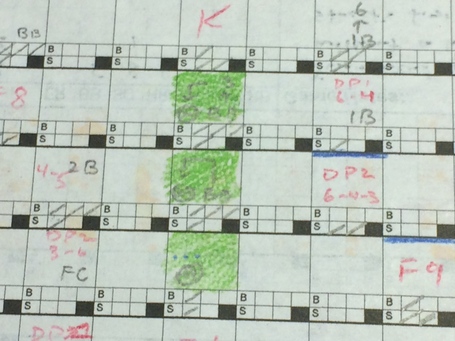 Rich Harden could not shut down the Rangers in the top of the sixth, however. Harden gave up two-out five-pitch walks to Michael Young and Mark Teixeira, and designated hitter Phil Nevin hit the dreaded three-run homer to give the Rangers a 4-2 lead. Sittin on 89 pitches at this point, Harden got Hank Blalock to pop out to Marco Scutaro, and Eric Chavez, Frank Thomas, and Milton Bradley were due up for the bottom of the sixth. 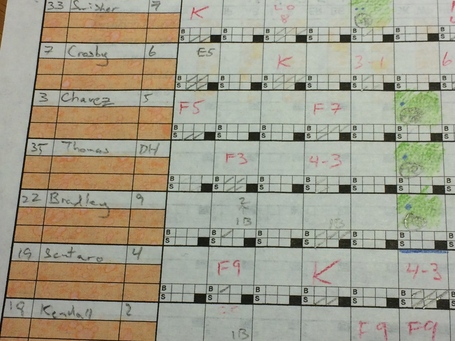 As I flipped the scorecard over to settle in for the sixth, Chavvy hit the first pitch out. Texas 4, Athletics 3.

As I circled the HR, drew a blue dot for an RBI, and shaded in Chavvy's box green for the run, the "Big Hurt," Frank Thomas, hit the next pitch out. Tie game! Texas 4, Athletics 4.

As I circled that HR, drew a blue dot for an RBI, and shaded in the Big Hurt's box for the run, Milton Bradley hit the next one out! A's lead on back-to-back-to-back home runs on three pitches, and like that Vicente Padilla was out of the game, 5+ IP, 8 H, 5 R (all earned), 1 BB, and 4 K. You have to think, if Bill King was still with us, that this inning would have merited a "Holy Toledo!" Athletics 5, Texas 4. 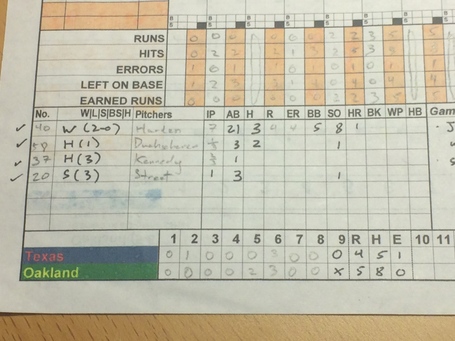 And that would be our final. After Harden's seven, Justin Duchscherer struck out Laynce Nix and Joe Kennedy got Mark Teixeira to ground into a double play. In the ninth, Huston Street came in to earn the save in his first full year as closer. 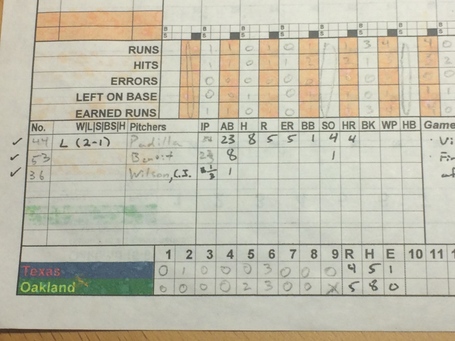 Joaquin Benoit entered the game after Padilla got rocked and retired eight in a row. The last pitcher for Texas featured the first appearance in 2006 by one C.J. Wilson, who started the year in AA Frisco. He got birthday boy Bradley to ground out to Michael Young at short. 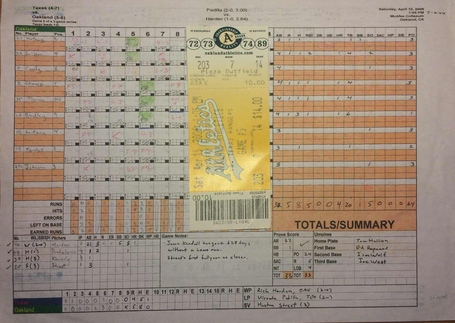 Nico had your recap.